I originally designed the Apple Watch app for my podcast player, Overcast, with a scaled-down version of the iPhone app’s structure.

This seemed like a sensible adaptation of my iOS app to the Apple Watch. In practice, it sucked. 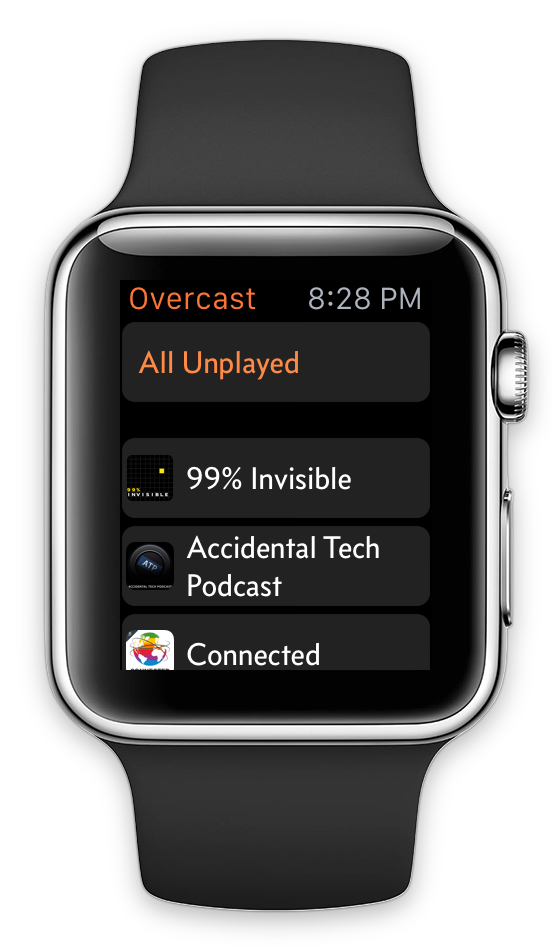 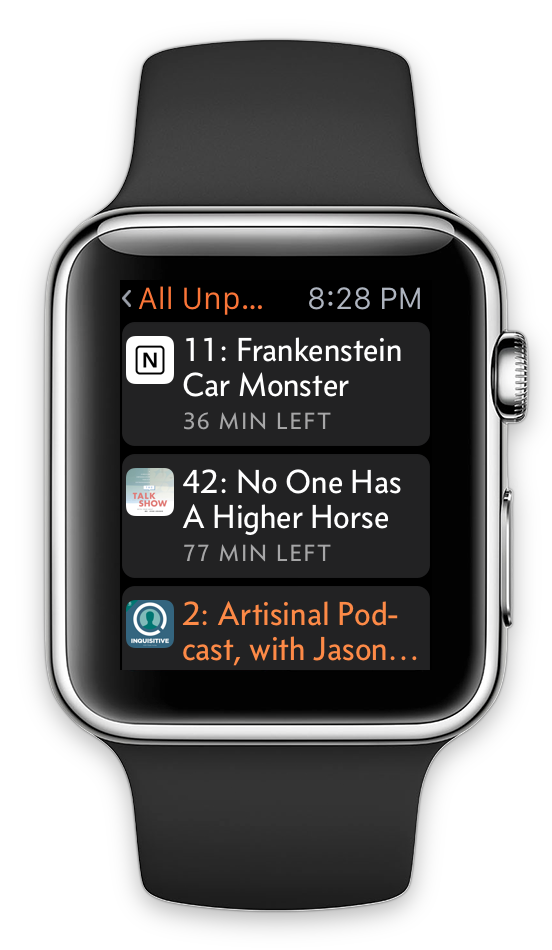 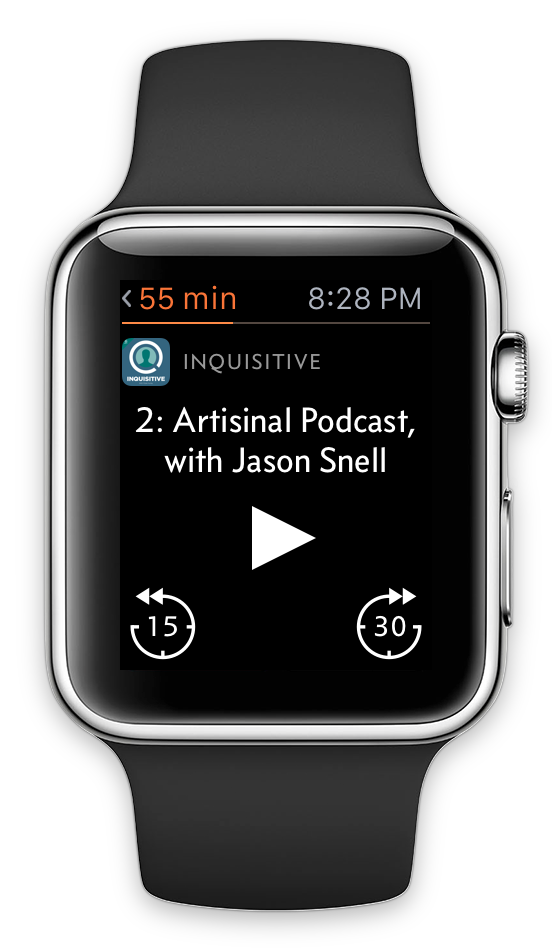 The three-level navigation hierarchy matched my iPhone app: the list of playlists and podcasts, then the list of episodes in the selected list, then the Now Playing screen.

I’d arranged the play/seek controls in a spaced-out triangle to minimize accidental taps on the small touch targets. The Now Playing screen also had a Force Touch menu to change speed or effects, or recommend the current episode.

I brought my own font, for the same reason I chose it for the iOS app — it’s narrow without looking condensed, so I can fit more words per line on small screens than Helvetica-like fonts1. I even rendered the episode titles as images so I could enable hyphenation, fitting a bit more per line and reducing huge gaps. (Apple’s Watch apps use hyphenation for the same reasons, but hyphenation isn’t available in WatchKit.)

Every time the interface loads or changes, the Watch and iPhone communicate round-trip over Bluetooth. Whether due to wireless flakiness, 1.0 OS bugs, or (most likely) both, WatchKit is frustratingly unreliable. Apps or glances will sometimes just spin forever instead of loading, and even when everything’s working perfectly, apps still take so long to load and navigate that the watch’s screen often turns off before you’ve accomplished anything.

My three-level navigation was a poor fit for the Watch in reality:

After using my initial app on a real Apple Watch for just one day, I set out to completely rethink and restructure it.

To simplify both the code and the workload on WatchKit’s fragile data connection, I rebuilt the app with the Now Playing screen as the single, main, root screen, with other screens sliding up as modal views only when needed. This dramatically improved loading time and reliability, and removed the need to keep the list screens updated in the background as data changed. 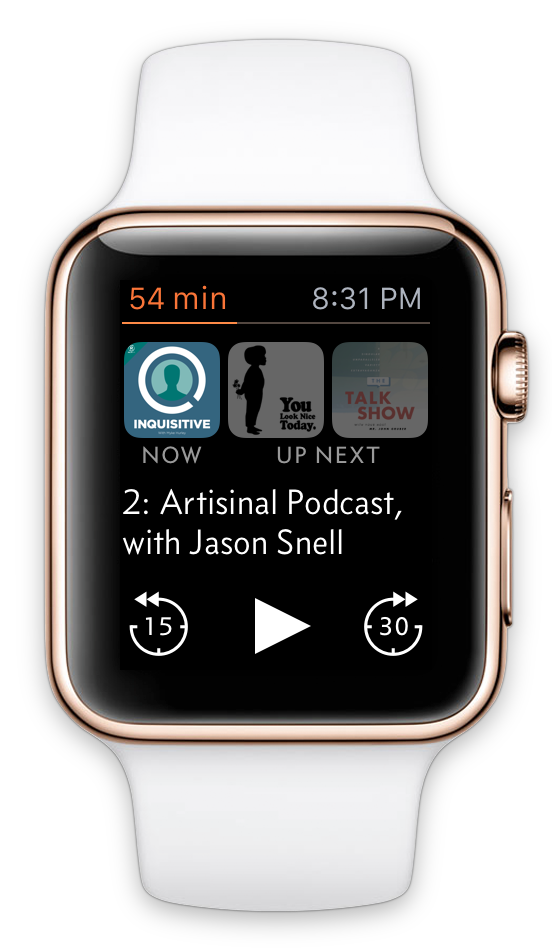 I experimented with a scrolling main screen and side-by-side “page” interfaces, but neither were as good as a single non-scrolling screen: not only did the single screen require less loading, but any scrollability in either direction requires touches to be slightly delayed (to determine whether they’re swipes) and sometimes misinterprets taps as unintended swipes.2

I also made the Now Playing screen more useful based on what I actually wanted in practice from a Watch app: 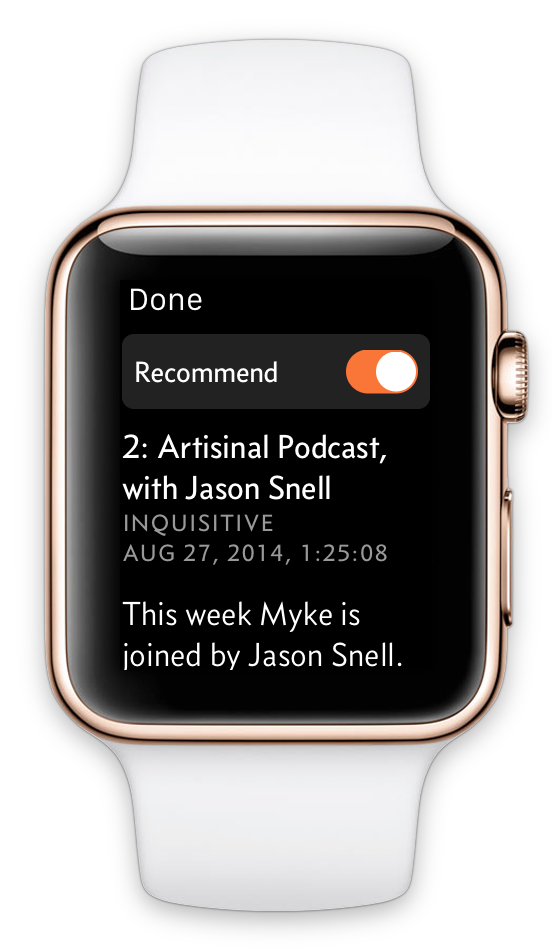 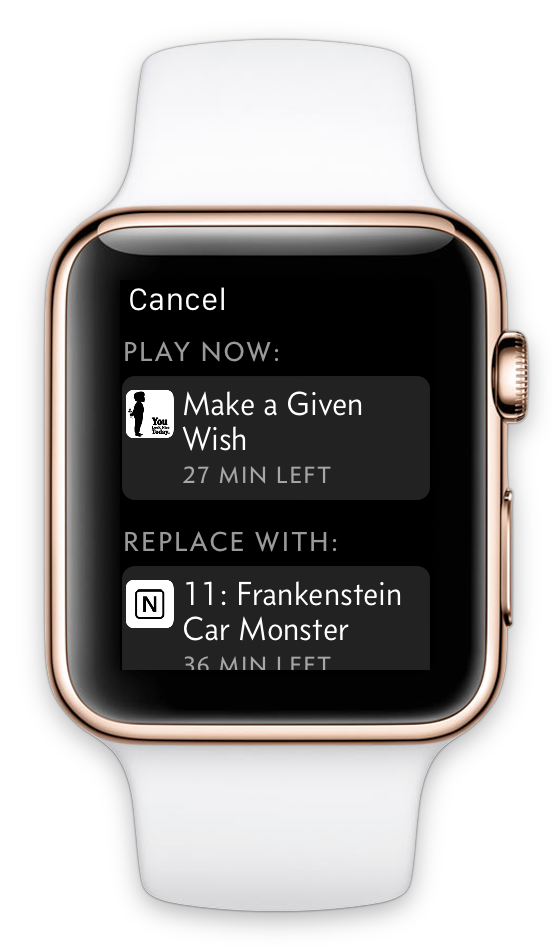 New Now Playing screen, and the menus when you tap the “Now” and “Up Next” artwork.

Despite moving to a single-main-screen interface, the new app has more functionality:

The Force Touch menu remained with the Effects pane and a Recommend shortcut, and now it’s on the only main screen of the app, making users more likely to find it.

Its new Podcasts item is how people browse to other podcasts and playlists (since I don’t have a navigation stack anymore), which I feel comfortable burying here because it’s infrequent in practice — Overcast’s playlists are designed to let you “live” in one most of the time, set priorities, and rearrange it as you like. And since this browsing interface is on-demand and short-lived, I removed all of the slow, error-prone live-sync logic. 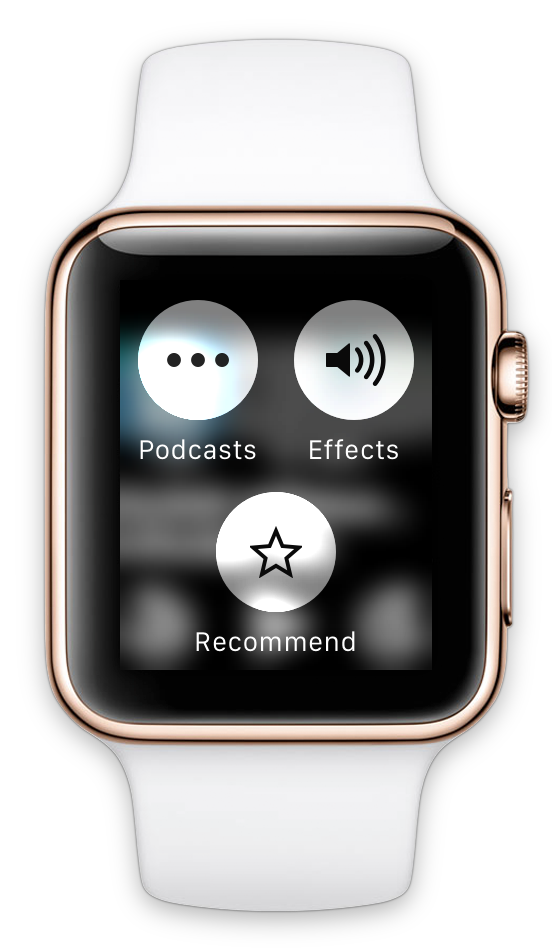 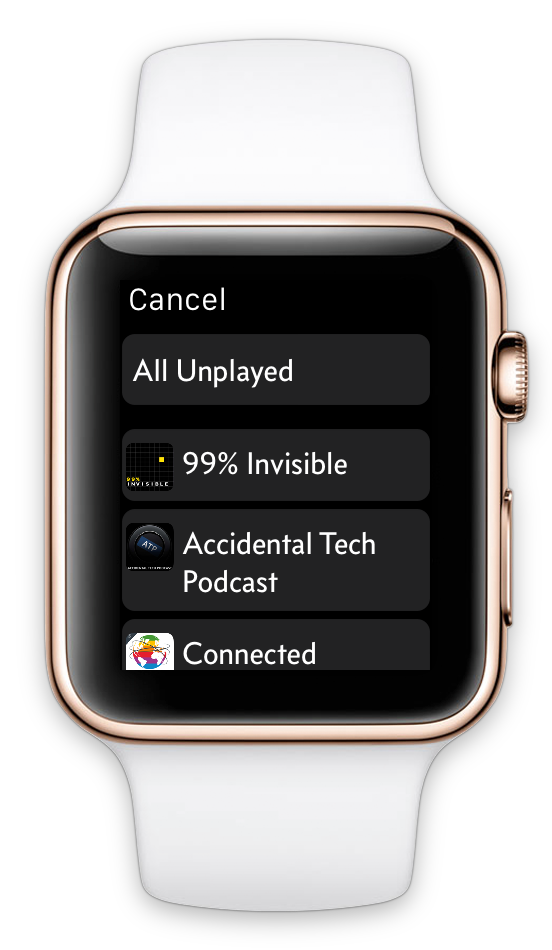 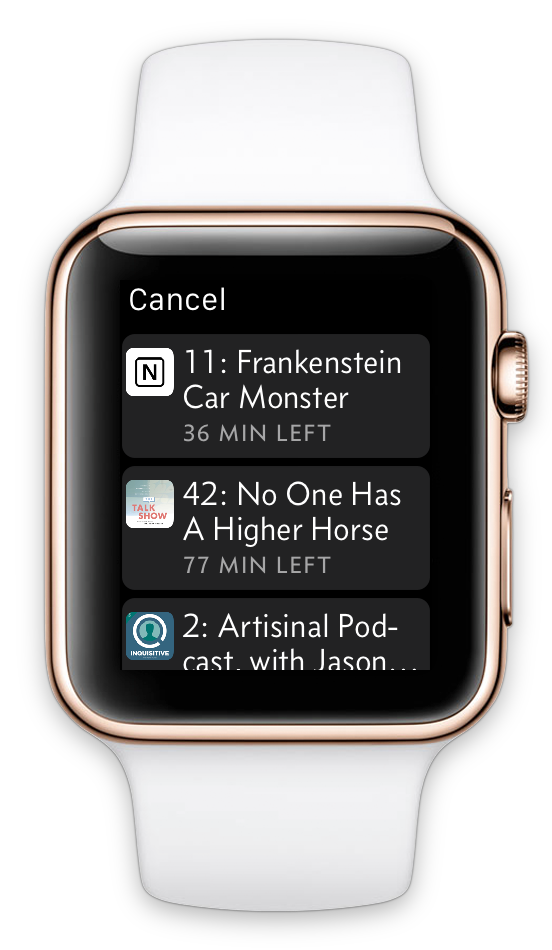 I had also initially underestimated glances, which are very important in practice. Going out to the honeycomb app screen to launch apps is cumbersome — it’s much more compelling to keep a small number of glances, using them (and complications, which I really want third-party access to) as status updates and quick app-launching shortcuts.

WatchKit glances can’t contain any buttons — tapping them just launches the app — so mine couldn’t hold a candle to the usefulness of Apple’s built-in media glance, especially since Apple’s is always loaded with no delay, while mine may show stale data for a few seconds while it refreshes (just like old Mac Dashboard widgets).

Even given the constraints of WatchKit glances, my initial glance wasn’t very useful. It only displayed the current episode and an approximation of a progress bar. The new glance includes all of the information from the Now Playing screen, so launching the app is only necessary to make changes: 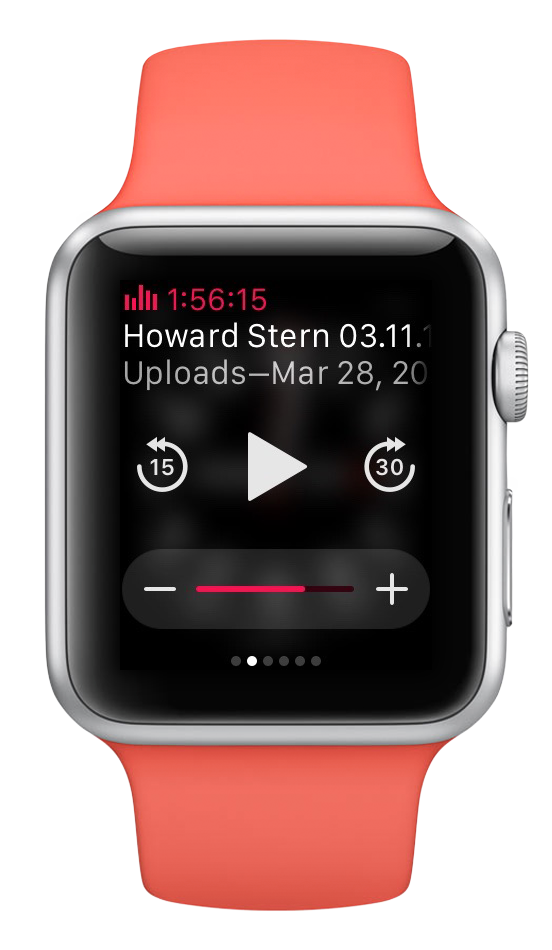 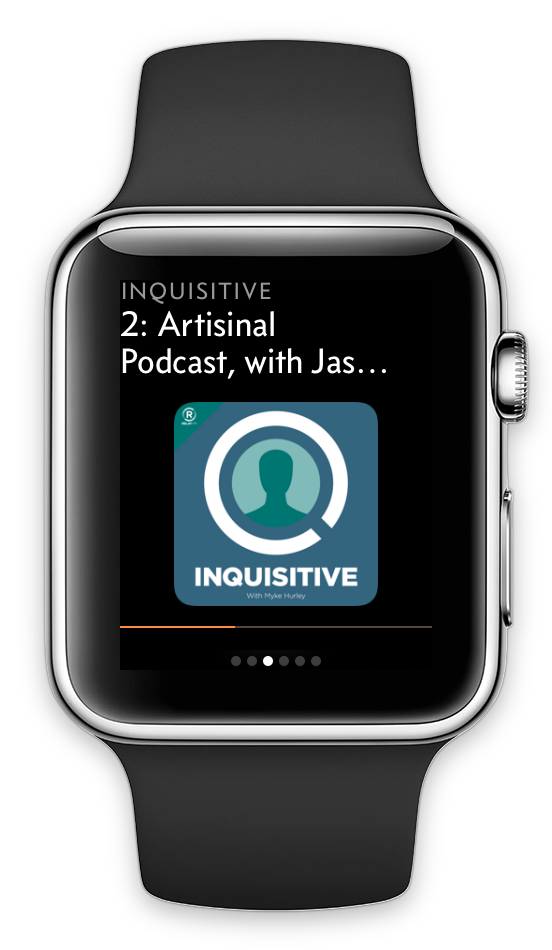 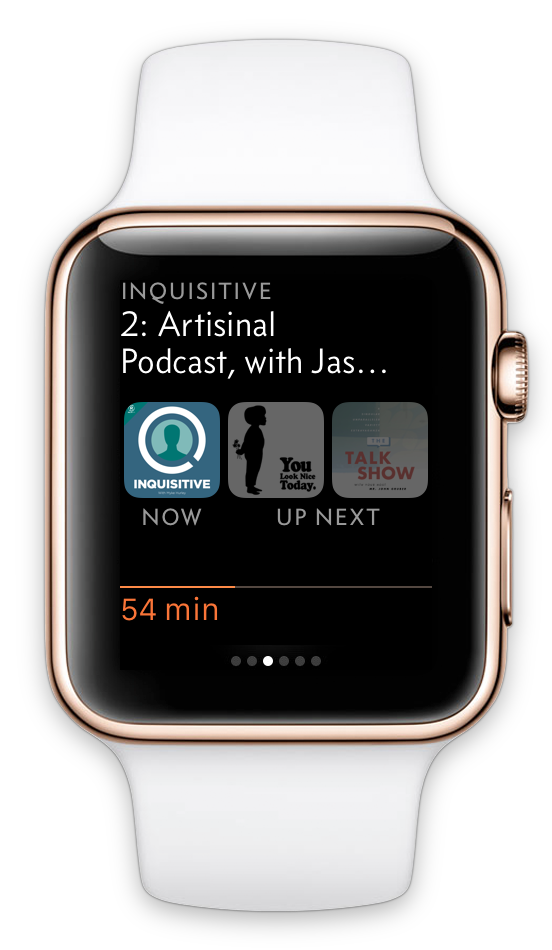 Friends and beta testers have all had similar reactions:

I’m much happier with the new app.

Trying to match the structure of the iOS app was a mistake. For most types of apps, the Apple Watch today is best thought of not as a platform to port your app to, but a simple remote control or viewport into your iPhone app.

My initial app was easier to conceptualize and learn, and it closely matched the iOS app. But it just wasn’t very good in practice, and wasn’t usually better than taking out my phone.

The new app is a bit weird and polarizing, and has a learning curve, but it’s great in practice if it fits your preferences. (Just like the Apple Watch.)

It’s unwise and futile to try to shove iPhone interfaces and paradigms into the Apple Watch. Instead, design for what the Watch really is.

Because WatchKit 1.0 is so limited and performance is so inconsistent, it’s hard to make Watch apps that are truly useful compared to just taking out your iPhone and using the full app. I believe this will always be the case to some degree, even after we get a native SDK.

Just as not every Mac app can have a useful corresponding iOS app (or vice versa) due to the physical nature and OS paradigms of iPhones and iPads, not every iPhone app can or should have a useful Watch app. Conversely, there’s a lot of new opportunity here: plenty of compelling Watch apps would’ve been much less compelling on the iPhone.

The Watch seems to fit on a continuum somewhere between the iPhone and, say, a Bluetooth headset — part peripheral, part computer — and it will likely stay there. Not every computing device should or will become a general-purpose platform. Today, software limitations are partially to blame for the Watch not replacing your iPhone, but it’s mostly due to physical limitations and ergonomics that won’t change significantly over time, just as tablets haven’t replaced laptops and likely never will. The newest Apple Watches in ten years still won’t be able to make the average human wrist bigger or give wearers a third hand, and the phone in your pocket will always have space for an order of magnitude more battery capacity and a screen big enough to type on.

So I don’t think the smartwatch will ever replace the smartphone as the dominant general-purpose mobile device. But there’s a lot that it can do, much of which it can do better than the smartphone, and we still have a lot of learning to do and assumptions to shed to unlock its potential.