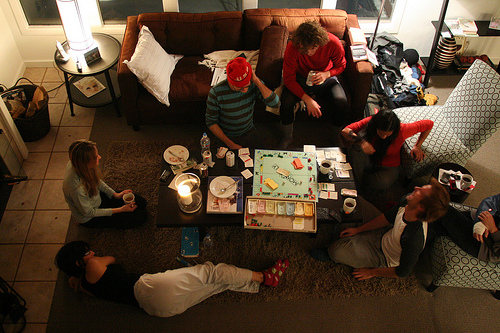 This was the first time I played Monopoly in 10 years. It astonished all of us that we played the game so seriously as kids — it’s incredibly complex and capitalistic as far as boards games go. I wonder how popular the game is outside of America … is this game fun or comprehensible for children in socialist societies?

Great photo! Most people don’t like Monopoly even in the U.S. because they have no attention spans and claim it takes too long. But it takes too long because of their own house rules imposed to make it easier.

How to make Monopoly NOT take forever: Don’t artificially inflate the amount of money in the game. Play by the official rules — and that’s it. People go bankrupt sooner, so the game ends quickly.

Most people don’t actually know the official rules, so here’s some reminders:

And some strategies to win quickly: