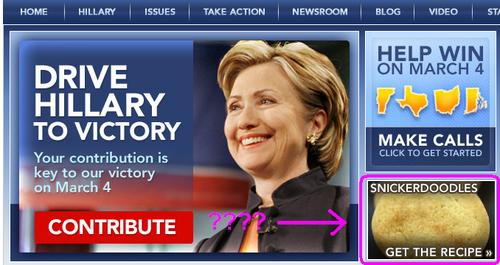 I thought she was trying to paint Obama as all sugary fluff and no substance.  When you go to Obama’s website you can learn about his detailed policy proposals.  Clinton’s website?  Snickerdoodles!

Hillary Clinton is resorting to what an aide described as the “kitchen sink” strategy.  They’re throwing out everything they have.  Apparently that include “Vote for Hillary if you like snickerdoodles!”