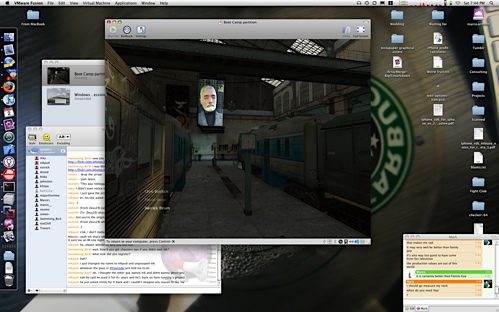 VMWare Fusion 2.0 beta 2 successfully runs Half-Life 2 under virtualization. It’s nowhere near native speed, but it runs. (On my 8-core Mac Pro with an 8800 GT, it runs like I’d expect from a 1.8 GHz Athlon with a Geforce 4.)

This is very impressive — I had no idea that hardware virtualization was advanced enough to pull this off.

For whatever it’s worth, I’ve been using Parallels Workstation (VMWare Fusion’s rival) since its release, and even though VMWare came late to the party, Fusion is a far better, more stable, and more polished product than Parallels. It’s so good that, if I used Windows more frequently than once every few months for browser testing, I’d happily pay for Fusion even though I already paid for Parallels.