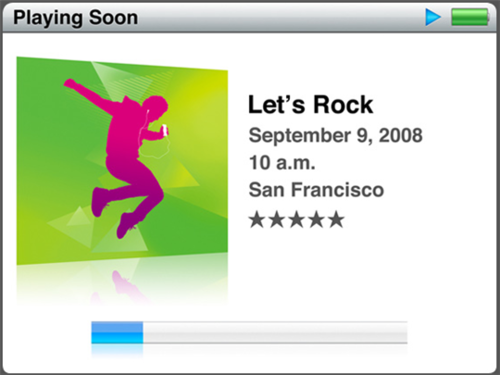 New skinny iPod Nano.
Likelihood: 75%.
The “fat nano” looks stupid, and I bet this has bothered Jobs and Ive enough to radically redesign it again to restore the much-cooler skinny form factor while retaining a reasonably sized screen for video. This is probably also the “lower-margin product transition” that they talked about on that earnings call: I bet they can price this at $99 for 4 GB. That will be a huge hit for the holiday season.

Minor update to iPod Touch.
Likelihood: 50%.
Sure, it’d be nice if it looked more like the iPhone 3G, but it would be so minor that I think it’s unlikely. And unnecessary: nobody’s really complaining about the Touch’s appearance.

Price drops on iPod Touch.
Likelihood: 25%.
Apple rarely drops prices on existing products — they usually just introduce new models that may be cheaper. So a price drop is unlikely unless there’s a corresponding product update, which I don’t think will happen. And while iPod Touch demand has probably weakened since the iPhone 3G’s launch, I don’t think Apple really cares if one of their products gets cannibalized by another more-expensive one.

Major iTunes update.
Likelihood: 75%.
The rumors are thin on specifics, but it sounds like it’s more than minor tweaks: people are talking about entirely new features, such as interactive albums. This is a shot in the dark, but the timing’s about right, and they’re holding an entire event, so they probably have some big new software announcements.

iPhone/iPod Touch OS 2.1.
Likelihood: 50%.
I think “September” is still the official estimate for 2.1, but given Apple’s work-overload in this area, I bet it will slip.

Any Mac updates.
Likelihood: 10%.
This is an iPod event. No Macs here. Minor laptop updates don’t even get events — they’re just quietly upgraded and they get a promo on Apple.com for a while. None are due for a large enough transition that it would make sense to invade an iPod event. Large transitions are more likely to happen at MacWorld in January.