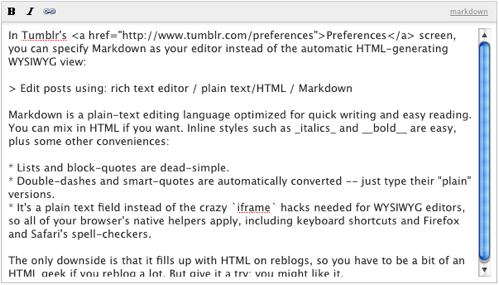 In Tumblr’s Preferences screen, you can specify Markdown as your editor instead of the automatic HTML-generating WYSIWYG view:

Markdown is a plain-text editing language optimized for quick writing and easy reading. You can mix in HTML if you want. Inline styles such as italics and bold are easy, plus some other conveniences:

The only downside is that it fills up with HTML on reblogs, so you have to be a bit of an HTML geek if you reblog a lot. But give it a try: you might like it.