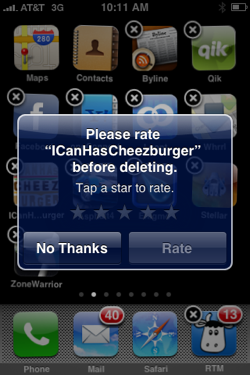 This feature bothers me because it will unfairly bias reviews to be negative. It’s the only time where Apple interrupts you and strongly encourages you to tap a star rating, and it’s doing so at a time that’s likely to be negative and fleeting, and without any text for the user to explain the rating.

Fewer than 2% of frequent users of Instapaper Free have left ratings, but it has a good 4-star average. (Instapaper Pro is 4.5 stars, which is pretty lucky since it’s a $9.99 app that was released before reviewers were required to have purchased the app.) If everyone who deleted them was aggressively encouraged to rate it with this dialog, my rating would probably be horrible. Everyone’s would.

The response rate to this mandatory dialog is likely to be much higher than App Store reviews, and it’s presented to the user during a negative action. It only makes sense if there’s a corresponding dialog presented during a likely-positive action, like when the user launches the app for the tenth time, or after it has been installed for two weeks, or on the first launch after it has been used for more than 30 cumulative minutes.

The App Store’s ranking and metrics are already misleadingly negative to developers, who keep cutting their prices because three people gave low ratings saying it should have been $0.99. This won’t help that trend at all, and will ultimately unnecessarily discourage a lot of developers from supporting the platform.