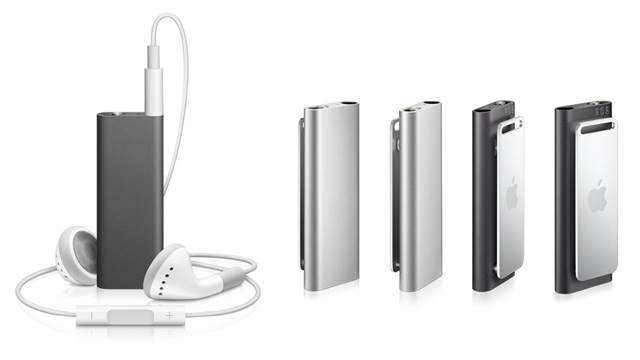 Apple surprises us with a new, more-talkative iPod shuffle

What surprises and disappoints me most is that the controls are now only on the earbuds’ cord, which means that there’s no way to use any other headphones without using a theoretical, clunky, overpriced third-party accessory. And if the controls work the way the iPhone’s clicker does, there’s probably only play/pause/next-track — no previous-track button (oops, thanks John, that’s apparently what triple-click does — I guess you can now tell that I’ve never used Apple’s earbuds). Although people wanting any usable navigation and features would probably be able to justify the extra $70 for the far higher value offered by the 8 GB iPod Nano.

The addition of spoken-voice artist names and song titles may indicate that the old Shuffle’s internal hardware and software have finally been replaced — possibly the first time since the original white-stick Shuffle’s release. The Shuffle has always been laughably buggy, from the original white-stick to the most recent nearly-square-clip model, and I hope they’ve finally resolved that.

Edit: Daniel Jalkut tipped me off that the voiceovers seem to be pregenerated by iTunes during synchronization. If so, there’s a good possibility that this is the same old buggy hardware and software as every other iPod Shuffle.