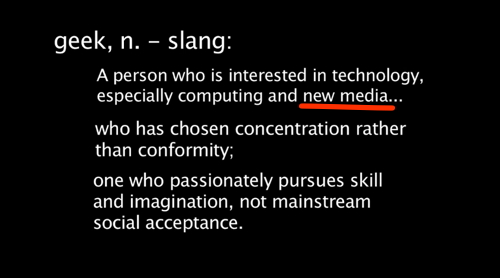 While some people in it are really geeks, most aren’t, and the inclusion of some is baffling. Being a popular user of a “new media” site, or being a “new media” celebrity, doesn’t make you a geek. There’s absolutely no connection whatsoever. This video tarnishes true geek culture with new-media celebrities because — surprise — it was made by new-media people, many of whom try to be cool by saying that they’re geeks (which, in addition to being far from the truth, is guaranteed to insult and frustrate actual geeks).

Being a good user of computers and internet-based services stopped being a geek-exclusive behavior a very long time ago. Geek culture isn’t something that a Twitter celebrity suddenly enters because Twitter was written by programmers and runs on servers.

I could rant about this for much longer, but anyone who can tolerate my tumblelog for more than a few sentences is much more likely to be a geek than half of the people in this video, so I’m preaching to the choir.