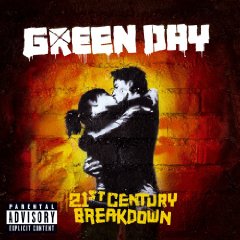 I did a lot of traveling this weekend and had this playing most of the time. At first, I didn’t really think it was anything special, but like most good albums, it gets better with each listen.

I’ve been listing to it here and there, but I have yet to form any concrete opinion.

It sounds a lot like American Idiot. It’s more of the same modern Green Day. But less catchy.

It’s not bad, but it’s immediately forgettable. Nothing’s sticking in my head. It’s heavily produced and edited to the point where it hardly resembles naturally performed music at all. It’s musical aspartame. It’s been engineered and genetically modified to appeal to demographics and markets and focus groups. The result is mediocre — it doesn’t inspire feeling in anyone. When the album ends, I don’t notice, and I’m not motivated to play it again.

Sometime in the 15 years since I bought Dookie in the 6th grade, they lost me. They became more artificial and mundane, and my taste shifted to more complex, natural, and ephemeral music. This would have been great in 1994 to go before Weezer in my CD player (Dookie was disc 3, and the blue album was disc 6). Now, it feels instantly old and flat, and I’d rather listen to other bands.

But I bet it’ll be immensely popular with 6th-graders, who weren’t even born when I bought Dookie.