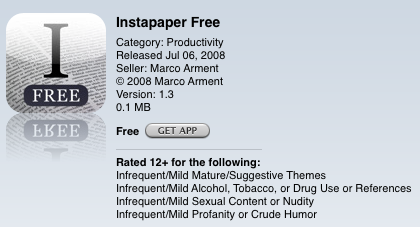 There’s a pretty significant problem in the new App Store ratings system. (Don’t worry, you can depend on me to blog about it!)

Instapaper Pro 2.1 was rejected because I had rated it like this — the current live rating for Instapaper Free — based on a comment that an Apple engineer made at WWDC. That wasn’t restrictive enough to get my Pro 2.1 update approved:

We’ve reviewed Instapaper Pro and determined that we cannot post this version of your iPhone application to the App Store at this time because it is not appropriately rated. Our review indicates that the application content is not consistent with the current rating. Instapaper Pro allows unfiltered access to the internet, where content with mature or suggestive themes can be accessed. Applications must be rated accordingly for the highest level of content that the user is able to access.

In other words, every app that allows users to see unfiltered internet content must be rated “17+”. I guess that’s somewhat reasonable.

But this is how the ratings form looks. It’s vague, and it’s not entirely clear to “unfiltered internet” app authors which of these may apply. If your app can display arbitrary images or videos, that could technically include nearly everything on the form except “Simulated Gambling”. The App Store reviewer cited only “Mature/Suggestive Themes”, but I should probably also include “Profanity or Crude Humor”, and I’m required by the policy to set them to “Frequent/Intense” (otherwise my submission, set to Infrequent/Mild, would have been accepted).

But the rating criteria I choose show up on the App Store pages like the photo above. That means, right under Instapaper Pro’s icon, it will need to say at least:

And that’s assuming that Apple ignores the possibility that someone could technically use Instapaper to save any web page of their choosing, including those containing violence, references to alcohol and drug use, horror/fear themes, and graphical sexual content. (Safari, of course, has the same range of potential offenses, with the addition of potential real and simulated gambling.)

These prominent notices make my app look pretty terrible in the App Store. I’ve already received emails from people asking why Instapaper Free is suddenly rated “12+”. How is it going to look when I need to update them both to “17+” citing frequent/intense mature themes and crude humor?

The solution to this is simple.

Not that I have any hopes that Apple would actually do that.