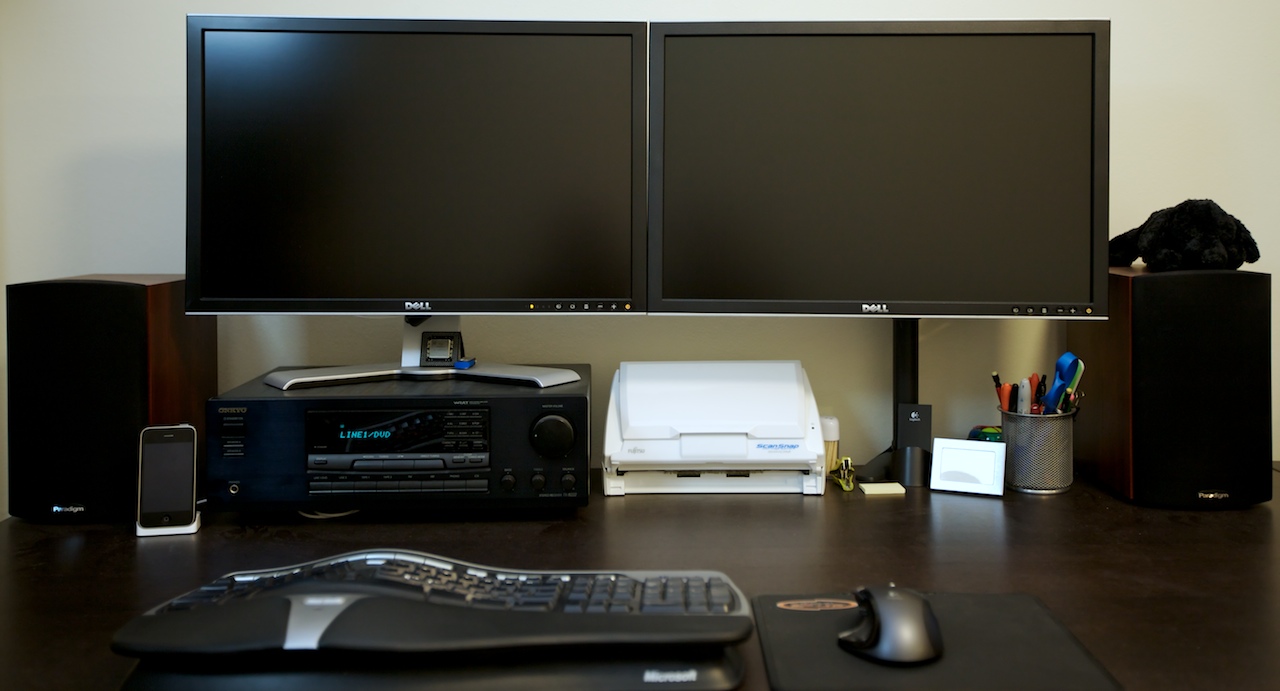 Adam’s ode to his favorite computer speakers inspired me to finally post a photo of my new desk setup.

My first computer speakers were the pack-ins that came with my first sound-card kit. They were powered by a pair of C batteries each, and didn’t sound awful. (I’ve heard much worse from computer speakers.)

But they sucked compared to the midrange consumer stereo I had a few feet away from the computer, so I, a geeky sixth-grader, got my mother to drive me to Radio Shack so I could buy the 1/8”-to-RCA cable that would connect my sound card to my stereo.

Sure, they can be compact, practical, and economical. But I’ve never heard a set of computer speakers that I liked better than a decent detachable-speaker integrated stereo or, like my current setup, a basic receiver and a pair of bookshelf speakers.

My current setup follows a pretty simple formula: Get whatever receiver you can find for a reasonable price that’s from a decent consumer brand. Mine’s an Onkyo TX-8222. Stereo only, no surround nonsense. Old technology works just fine here: garage sales, thrift stores, or your parents’ basement will often have perfectly good receivers for free or almost-free.

Then get a really great pair of bookshelf speakers. These can often be almost-free as well, but I decided to splurge and get the “entry-level” (cheapest) pair available from a highly regarded audiophile brand (these). They cost about $250. Nearly every highly-regarded speaker brand has a great bookshelf offering for less than $300. Audiophiles hold their equipment to such high standards (that frequently cross the placebo line in hilarious and sad ways) that even their “entry-level” models sound a lot better than nearly anything you’ll find in Best Buy, even for far more money.

Then set the equalizer (and any applicable bass/treble knobs) to flat, unmodified output.

And you don’t need a boomy subwoofer to annoy your neighbors and distort your sound mix. (I know, they make good foot rests. Get a UPS instead.)

$250 plus the cost of the receiver ($0-200) is a lot of money compared to most “premium” computer speakers, which tend to be $150-300. But how often do you need to buy these? Bookshelf speakers and basic receivers can last decades.

Computer speakers still win if you need a complete setup for very little money, or if you need them to take up as little space as possible. But the massive difference in sound quality makes the receiver setup far more worthwhile to me.

Note: I recognize that my speakers should be on stands that raise them by about a foot. I haven’t yet found good stands of the proper height. They still sound amazing.