Ged Maheux of the Iconfactory recently wrote Losing iReligion, in which he criticizes the business prospects of the App Store. He cites some general concerns, but much of the post is based on the unfortunate commercial failure of their Ramp Champ game.

When the Iconfactory & DS Media Labs released our latest iPhone game, Ramp Champ, we knew that we had to try and maximize exposure of the application at launch. We poured hundreds of hours into the game’s development and pulled out all the stops to not only make it beautiful and fun, but also something Apple would be proud to feature in the App Store. We designed an attractive website for the game, showed it to as many high-profile bloggers as we could prior to launch and made sure in-app purchases were compelling and affordable.

Subjectively, I remember seeing massive build-up for it from the people I follow online. It was clearly a major effort. But it has apparently failed:

The lack of store front exposure combined with a sporadic 3G crashing bug conspired to keep Ramp Champ down for the count.

… Ramp Champ’s sales have not lived up to expectations for either the Iconfactory or DS Media Labs. What’s worse, many of the future plans for the game (network play, online score boards, frequent add-on pack releases) are all in jeopardy because of the simple fact that Ramp Champ hasn’t returned on its investment.

Its sales could have been disappointing for any number of reasons. Maybe people just didn’t like the gameplay, which presents carnival Skee-Ball-style ball-rolling, target-knocking-down action with extremely strong, detailed graphics and atmosphere. But, as Ged points out, Freeverse’s Skee-Ball has been successful, and it’s a very similar type of game.

Simplistic gameplay doesn’t prevent iPhone games from being successful — in fact, it usually helps. One of the most popular recent games is Paper Toss, a game so simple and mindless that watching someone play it on the subway made me lose much faith in humanity.

What happened? As usual, I have a theory: there are two App Stores.

App Store A: Simple, shallow games and apps with mass-market appeal. These live and die by the App Store’s “Top” lists, so success is difficult to achieve and is short-lived at best, but with the largest potential payoff for the lucky few at the top. These apps are developed quickly and cheaply, and are rarely updated once their initial popularity (if any) dies down. Very few are priced above $0.99. Impulse-buying is king, with most purchases happening on the phone itself, and most buyers don’t know or cares whether you’re an established developer unless your name begins with “MLB”. Nearly every best-selling app falls into this category.

App Store B: Apps and games with more complexity and depth, narrower appeal, longer development cycles, and developer maintenance over the long term. These tend to get little attention from the “Top” lists, instead relying on the much-lower-volume App Store features (e.g. “Staff Picks”), blogs, reviews, and word of mouth. More of their customers notice and demand great design and polish. More sales come from people who have heard of your product first and seek it out by name. Many of these apps are priced above $0.99. These are unlikely to have giant bursts of sales, and hardly any will come close to matching the revenue of the high-profile success stories, but they have a much greater chance of building sustained, long-term income. Due to the likely lower revenue cap, these are usually developed on small budgets by individuals who can do most or all of the work themselves.

But they’re not two different stores (“Are you getting it?”). There’s just one App Store at a casual glance, but if you misunderstand which of these segments you’re targeting, you’ll have a very hard time getting anywhere.

The Iconfactory seems entirely set up for producing excellent apps for App Store B. Their most well-known app, Twitterrific, is solidly in that camp. The problem with Ramp Champ is that they targeted App Store A in gameplay depth and type (which may not have been intentional), and budgeted for App Store A’s expected sales for a hit. But they built, designed, and promoted it as if they were targeting App Store B.

Freeverse’s Skee-Ball game targeted App Store A, but in a way that’s more likely to appeal to its more simplistic, impulse-oriented demands, starting with the name and icon:

Skee-Ball is a registered trademark that the Iconfactory didn’t license (Freeverse did), so the Iconfactory couldn’t call theirs by that name, make the game look anything like it, or even mention it anywhere in the description. But that’s how most people know this sort of game.

App Store A’s customers don’t read our blogs. They don’t see the professional reviews. They also don’t see the Staff Picks section in the store because it’s not in the phone version. Your only chance to get these customers is with the “Top” and category lists, so you need to get them quickly and efficiently. When they breezed past “Ramp Champ” in the low-information list view, they probably couldn’t tell what it was.

The primary screenshots of each game also show a clear difference for people who did select either app for more information: 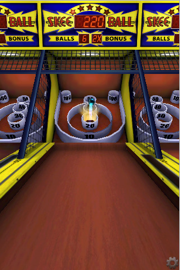 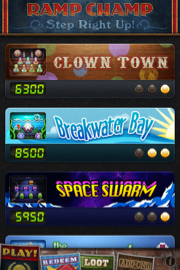 Skee-Ball is immediately recognizable, well-known, and obvious. But Ramp Champ looks likely to lose out on nearly every impulse purchase from people who don’t want to spend much time looking into it — which is nearly every buyer for App Store A.

The Iconfactory’s apps are able to compete strongly when people choose apps based on research, reviews, or feature comparisons. But that’s not how App Store A’s customers operate. Whether Ramp Champ is a better game than Skee-Ball is irrelevant to them because they’ll never take the time to find out.

Many of Ged’s complaints — in fact, many of everyone’s complaints relating to App Store economics, promotion, and ranking — only apply to App Store A. He’s right to condemn the practical economics of it and question whether to invest significant resources into it again.

But App Store B is doing fine. It’s remarkably stable. This is the store I live in with Instapaper and happily share with many extremely talented developers, including Loren, James, Adam and Cameron, Jeff and Garrett, and — unquestionably — the Iconfactory.

We enjoy great advantages by targeting App Store B:

There are also, of course, some disadvantages:

Personally, I would never trade this for the hit-driven, high-risk, quick-flip requirements of the mass market, even if it means that I’ll never be profiled in Newsweek for making hundreds of thousands of dollars in a few months with the App Store.