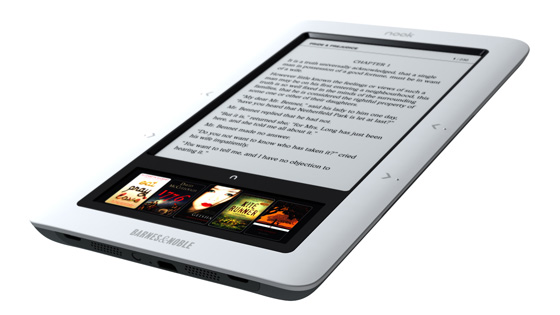 Barnes & Noble announced the Nook yesterday, as a clear competitor to (and, in many ways, a blatant ripoff of) the Kindle. Notably, the reading area is still e-ink, but they replaced the keyboard area with a traditional backlit, touch-screen LCD. The idea is that the LCD can do the quick animation and touch controls that e-ink can’t do well, and the e-ink can do the readable text that LCDs can’t do well.

Geeks are thrilled about its hardware. But I have some doubts about some of the practicalities of its design.

The brightness of the LCD will be distracting when reading the e-ink screen. There’s been no mention of an ambient light sensor for dynamic brightness, so I assume it doesn’t have one, which means it’ll blind you at night or be too dim in the sun without constant adjustments.

Presumably, the LCD is frequently turned off during reading to reduce distraction and conserve battery power, but it will be jarring every time it turns on.

Having two adjacent screens will create navigational confusion. A lot of people will try to touch the e-ink display out of confusion, a bad guess, or ingrained habit and be slightly frustrated every time. Displaying some interactive elements on the e-ink screen, including dialogs and input boxes, adds to the confusion. It’s a touch-screen device, but only in one area. You touch the things that you interact with, except those.

The book-lending feature is The Social. How many Nook owners are likely to know any others? It’s a nice feature, but it’s not one that they should spend much time marketing.

And while I’m all for fair marketplace competition, it’s misleading to include Project Gutenberg in advertised catalog numbers. The same sentiment applies to Google, Sony, and others who do this in any implied comparison to the Kindle’s catalog. Technically, yes, those are ebooks, but everyone has access to them and hardly anyone wants to read them. I recognize that this is a nitpick, but in a market this young, it’s important that consumers aren’t misled. (They’re already going to be upset when they realize that Amazon’s and B&N’s respective devices can’t read the other’s books.)

I’m hoping for more competition in the ebook-reader market, so the Nook’s introduction is great news. But I’m skeptical enough about it that I strongly recommend that you wait until the reviews come out, and you use one in person at their stores (a huge advantage over the Kindle), before making any buying decisions.