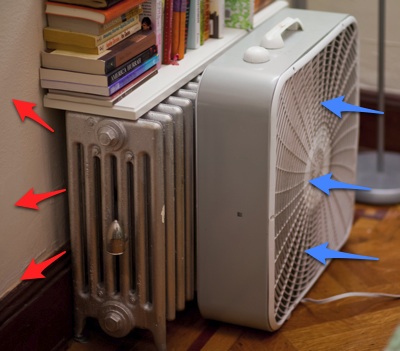 Embezzle a bit more of your building’s heat.

Here’s a useful trick to unfairly get more heat into your apartment than the others in your building: Use a box fan to convert your passive radiator — in effect, a giant heatsink — into an active heatsink-with-fan combo.

As most computer-assembling geeks know, a passive heatsink transfers heat from its source to the air very slowly. Even adding a small amount of direct airflow significantly increases the rate at which heat is transferred into the air.

Aim a box fan through your radiator when it’s actively heating (not just sitting there, freezing, as they tend to do for hours), and the room will very quickly fill with heat.

Q: Can anything go wrong?
Probably. Please don’t sue me if your fan blade flies off during operation and bisects your cat. I’ve never seen it happen, but I know from my experience diagnosing computer problems that “I’ve never seen that before” isn’t a guarantee that something won’t happen. One common risk is that there’s probably a lot of dust under, in, and behind your radiator. Vacuum it before attempting this maneuver, and start with a low fan speed the first time in case a lot of dust flies out that you weren’t expecting.

Q: Why does it work?
All you’re doing is increasing the amount of heat that gets transferred from the radiator to the air in your apartment. You’re cooling the steam a bit more than usual before it enters the next apartment on the pipeline. In effect, you’re embezzling heat from everyone else in your building, but in an amount that’s miniscule when averaged over everyone else. Like in Office Space. (And if your heat is thermostat-controlled, like most tend to be, you’re probably just causing the heat to stay on slightly longer rather than making anyone else colder.)

It’s up to you whether you’re OK with that. But when most of your neighbors are out of town for the weekend and you’re in an old brownstone with “conservative” heat and very drafty windows that you’ve already foamed and plasticked but still manage to let freezing air (and even the occasional insect) through, you may be inclined to take whatever advantages you can get.