Sounds like a terrible product. I bet it will fail. 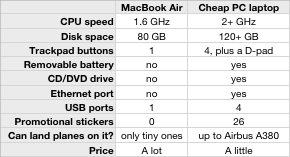 Sounds like there’s no reason to buy one. (Like nearly everyone else, I complained about all of this when the Air launched. We all do it sometimes.) But it’s been very successful, especially in its later revisions, and the SSD models are great machines for people who travel a lot.

So it bothers me when either of two common failures occur.

This is when a competitor advertises (and often, truly believes) that their product is at least equivalent to another one because it has checkboxes in many similar categories.

Since the iPhone’s launch, every other phone manufacturer has made competing phones with 3” touchscreens, music playback, and square app icons arranged in a 4x4 grid. (Well, except Microsoft’s hilarious interpretation.)

It’s as if the product managers commanded their engineering teams to come up with lists of the iPhone’s “features” and copy them so their phones would sell as well as the iPhone.

Every few months, the copy-list gets longer. Everyone just finished checking off their App Store box and is wondering when the developers are going to rush in.

This happens when a geek or manager makes a list of features to compare two products and comes to an oversimplified conclusion based on which one has more checkmarks in its column.

The main problem is obvious: how do you determine which features go on the list? It can’t possibly be exhaustive enough to represent the entire experience of using the products, and it won’t be the same list for everyone.

Here’s why I decided not to use a Nexus One (or any other Android phone): 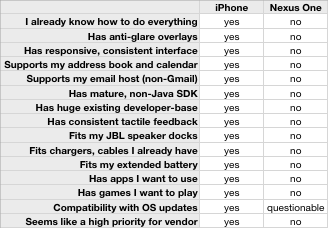 The Nexus One may be the better choice for people who care about what it does well, like synchronizing with Google’s services. But I don’t care about those things, and I do care about a lot of factors that the iPhone is a better fit for.

It would be ignorant and arrogant for me to presume that your priorities are anything like mine.