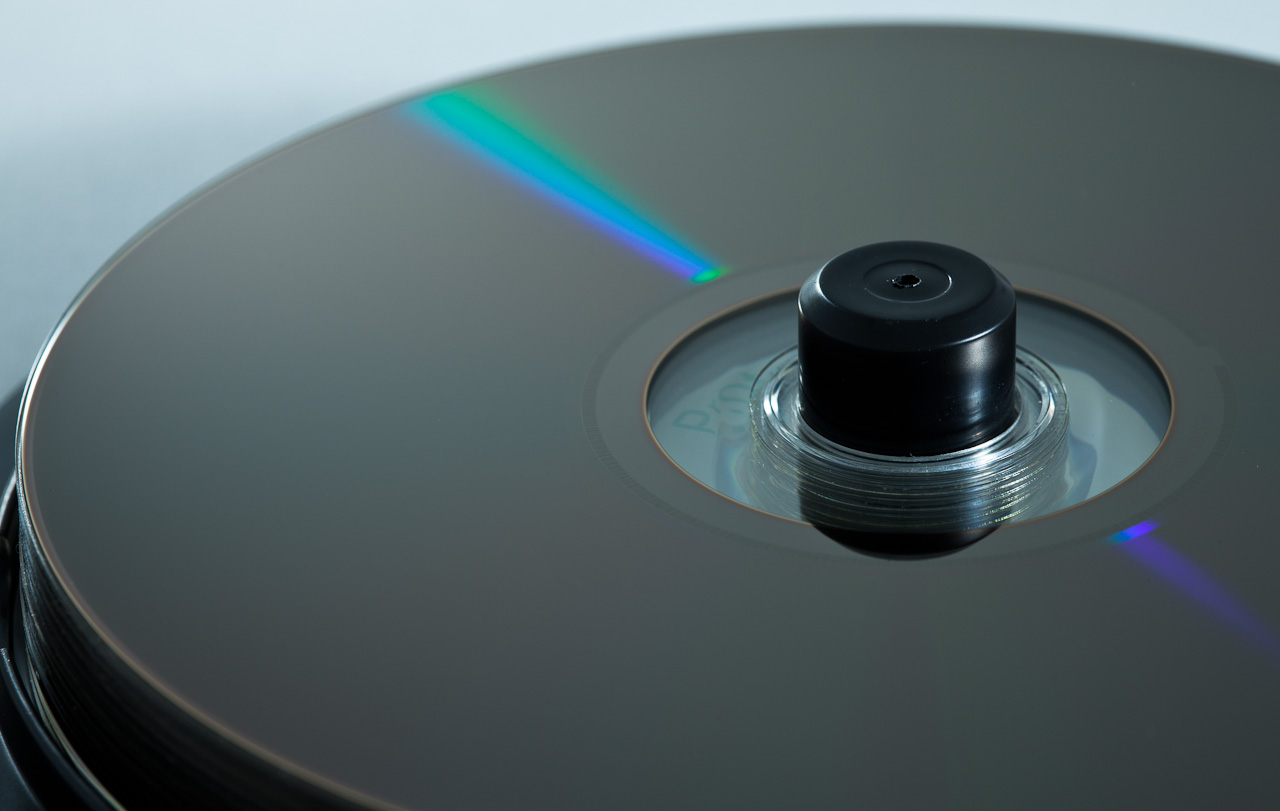 The recording surface of a BD-R disc, a difficult but immensely satisfying photo to take.

I added a Blu-ray burner to my computer this week, now that they’ve come down to sane prices and I actually have a use for one.

Our photography (especially now that Tiff’s shooting professionally) generates very large volumes of RAW files from the 5D Mark II, which run about 25 MB each. A single wedding can easily result in 15 GB of photos after picking and postprocessing.

Optical media is excellent for long-term archival storage, especially if you migrate everything to a modern format once or twice per decade. But from such large files, even recordable DVDs at 4.7 or 8.5 marketing-GB can’t hold entire events.

Fortunately, Blu-ray raised the limits by packing 25 GB into each layer. At the time of writing, the 50 GB, double-layered discs are still a fairly prohibitive $16 each, but the single-layered 25 GB discs are down to $2-3, making them cheaper per GB than high-quality DVD+R discs — and, most significantly, they store five times as much data than DVDs in each case, sleeve, or whatever you’re keeping them in.

Installing it into my 2008 Mac Pro was, fortunately, uneventful after I got the required SATA and Molex-to-SATA-power cables (previously). I followed this guide to access the extra SATA ports and this guide to route the cable (steps 1-4 only). An 18” SATA cable with a right-angle connector on the motherboard end was just long enough.

Mac software support is better than I expected, but still immature.

Pipe Mac BlurayRipper Pro to MakeMKV to HandBrake, and you can convert1 a movie to a reasonably sized .M4V file for your laptop, iPhone, iPad!, or Apple TV. The result looks much better than DVD rips, even when sized down to fit within the Apple TV’s maximum supported resolution of 960x540. But using three different tools reminds me of the bad old days of DVD ripping and wastes a lot of time and space, so I’d love to see Mac BlurayRipper Pro or HandBrake incorporate the full functionality of converting a Blu-ray movie to an Apple-device-friendly H.264 MP4 file.

It’s much simpler for data discs, since Finder has native support for Blu-ray burning. It works exactly like CD and DVD burning: insert a blank disc, and you get a popup (“You have inserted a blank BD.”) asking what you’d like to do with it. Make a burn folder, or use the Burn option from a folder’s gear menu in 10.6, and it burns the disc like any other.

It’s a bit buggy: my first two discs were coasters. Finder had auto-selected 10X as the burn speed, so I went with it, but it hung2 halfway through burning each disc without explanation. The discs were labeled for 4X, so I went with that on the third try, and it worked. Normally, the disc, drive, and burning software coordinate to agree on the maximum burn speed supported by the media, but somebody’s doing it wrong here.

But given that no Mac has ever shipped with a Blu-ray drive, nor has a Blu-ray drive ever been offered as an option, this is still pretty great despite the bugs.

This definitely isn’t for everyone, but if you’re one of the rare geeks who has a decent reason to get one and the knowledge and tolerance to install it and deal with its bugs, it’s a cool new toy.