I’ve recently had a false start with Apple’s iPad Case. I cannot believe Steve Jobs greenlit this thing. The tacky/sticky case surface is a magnet for dust, dirt, and (most unfortunately) cat hair. Putting the iPad in the case and taking it back out feels akin to performing surgery. The bottom of the case in landscape mode becomes the inside of the case in portrait mode, which gets stuff on the iPad screen. And, while the case is a huge pleasure to use at an angle in landscape mode, it is ungainly and uncomfortable to use in portrait mode. I would also love a case that works with Apple’s iPad Dock and am disappointed to see Apple’s own case doesn’t work with Apple’s own dock.

That case is less of a “false start” and more of a “turd”. For some reason I thought that Apple’s own case would be functionally superior to the third-party efforts but after seeing Marc’s Apple case in real life, I was wrong. […]

I hate cases. What I want isn’t a case so much as a slip. Just something that keeps the iPad covered and clean while it’s traveling. This isn’t about protection so much as transportation and subtlety. It’s the same reason I don’t strap a bra on my car. Sure, the hood will get nicked but I’ll take the dings over making a BMW look like it’s on its way to an S&M convention.

I also hate cases, and Apple’s iPad case is disappointing, to say the least. The rubbery surface not only picks up every bit of dust and dirt that it goes near, as Marc said, but it also fights you with friction if you’re trying to slide it into a bag pocket with other items — one of the only reasons why I wanted a case for the iPad at all.

Within its first 15 minutes of use, my case looked embarrassingly and permanently dirty. (Much like my iPad’s screen, but that’s another story.) Removing the iPad from the case is so difficult that my initial assumption that I’d mostly use the case for transportation, removing the iPad when I used it most of the time, proved so impractical that I just leave the case on all the time. (Like a car bra.)

I feel like an idiot for having spent $42.46 on this, and Apple should be embarrassed that this case brazenly displays their logo.

I, like Jeff, hate cases. My phone and laptop live in dedicated pockets, so they don’t need cases. The ideal solution, just like a laptop, is to carry it in a bag that gives it a dedicated pocket. Ideally, that pocket has soft felt or microfiber cloth on the innermost1 side to help wipe fingerprints from the front of the screen.

But for devices in this size range — too big for a pocket, but small enough that they’ll be carried alone frequently and won’t always have dedicated pockets in bags — a case is often needed in practice, even for case-haters like us. I absolutely love my Cole Haan Kindle case.

I think an iPad case is a good idea, but definitely not this one. Since it’s nice to take it out during use, a sleeve is probably smarter than a flip-case, but the prop-up-ability for the iPad is helpful for landscape typing, and only flip-cases can reasonably do that. 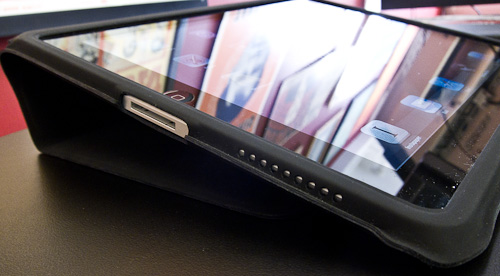 Ideally, I’d love to see a high-quality leather flip-case, with basic prop-up-ability, that the iPad can be quickly inserted into and removed from. I don’t think it exists yet. Let me know when I become wrong about that.