I’m a huge fan of Cole Haan’s fancy leather Kindle case, so when I got an iPad and quickly realized it needed a case for convenient carrying outside of the home, I was disappointed to see that nobody had made a great leather case. Every other folio-style case I saw looked like a cheap cellphone case from 2002.

But Piel Frama’s magnetic-closure case looked promising. It was only available for preorder, nobody had reviewed it, and it cost 110 € with shipping (about $137 today) — not unreasonable for a nice leather case, but not cheap.

I took the risk and ordered one for The Good Of The Internet. (Well, for myself. But I’ll share it with you.) 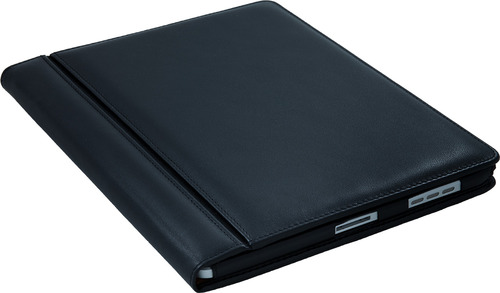 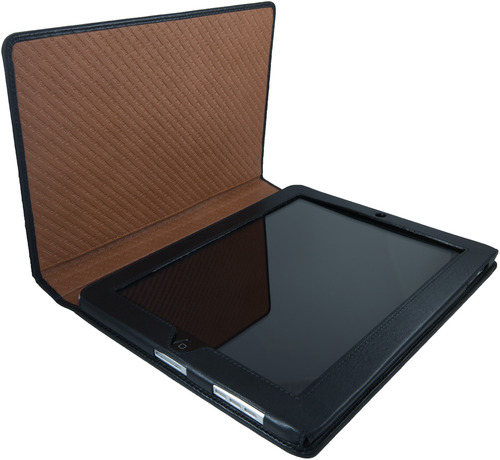 The leather and craftsmanship are both very high quality. The price is right.

It’s a basic folio design with no surprises. Holes are cut for all ports, including the speaker on the bottom edge and even the ambient light sensor in the top bezel.

The top cover has an interior pocket — the line by the spine is actually a flap — but putting anything beyond a sheet of paper in there would ruin the shape of the case and stretch out the pocket’s flap, so it’s not particularly useful. Piel Frama included a little suede rectangle in the pocket to buff fingerprints off the screen, which is convenient and probably the most useful thing to carry in the pocket.

The magnetic closure is especially nice, with just the right strength that it won’t accidentally open but not so much that opening it is a chore. You can see the round magnet outlines in the right-side corners of the bezel cover: 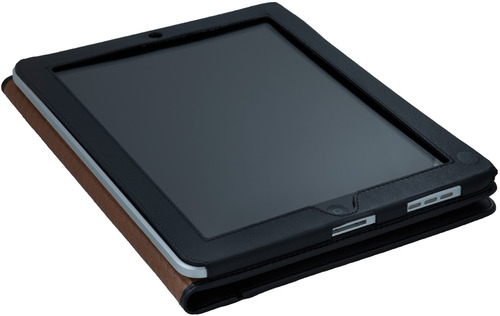 Like the Apple case, the top cover has a folding flap that allows the iPad to be propped up such that the iPad’s top edge is about 1.75” above the surface it’s resting on.

Unlike Apple’s case, this is the only non-flat orientation in which this case can safely be propped. If you need to prop it up in any other orientations, this isn’t the case for you. 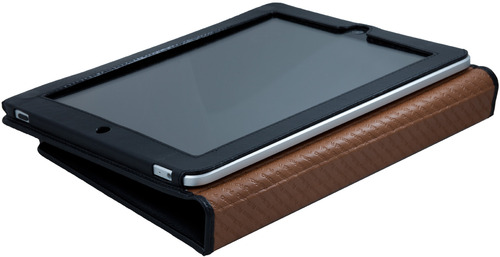 As you can see, the leather flaps that cover the bezel don’t rest completely flat. With mine, it’s more pronounced on the top and right sides, with the left and bottom being almost perfectly flat. I don’t usually notice this during use.

Inserting the iPad is easy: slide it in. To remove, just push a bit on the right edge, and it slides smoothly out from the left side. Installation and removal from Apple rubber case, by comparison, is extremely difficult because of the rubber’s texture.

But the Kindle 2’s side-clip mechanism is much better than anything I’ve seen for the iPad. Apple may not be able to copy it because of Amazon’s patents, but some kind of build-in mounting support in the iPad would be a welcome change (that I don’t really expect to happen) for version two.

There’s one big reason you might not want this case, even if you’re fine with the cost: compared with Apple’s rubber mess of a case, it adds a bit of weight and a lot of thickness, at about 1” thick when closed.

Apple’s rubber case at left, Piel Frama at right, flat on a desk with iPads in them.1

Since the iPad is a bit too heavy to comfortably hold up for a while without resting it on something, you could argue that adding weight with a case is a terrible idea. But I find that since I’m leaning it on something anyway, the extra weight doesn’t matter.

There’s a pretty good argument to be made for using a sleeve-style case with the iPad instead of a folio so you can enjoy its slimness during use. If you go that route, the nicest iPad sleeve I’ve seen by far is Jeff Rock’s WaterField Designs iPad Smart Case: it holds its shape without the iPad in it, so inserting it is much easier than a typical floppy sleeve, and the soft liner rubs fingerprints off the screen every time it’s inserted or removed.

Sleeves have a major downside: they’re not self-contained, so when you’re using your iPad, you need to put the sleeve somewhere. Depending on where and how you use it, that may be inconvenient enough to go with a folio. (For me, that’s usually true.)

So should you get this case? That’s up to you, but if you want a nice leather folio-style case, don’t mind the cost, and don’t need any other propped-up orientations except the basic slanted-typing one pictured here, this is a very good choice, and definitely the best that I’ve seen so far.