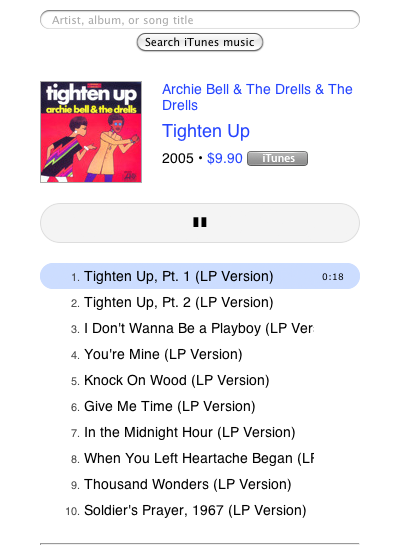 Preview.fm: An experiment for fast browsing of full albums.

I buy full albums, not singles. I listen to the complete albums, and I don’t use shuffle. My iTunes is sorted by “Album by Year”. I like albums.

But as this increasingly becomes a minority opinion, music storefronts like iTunes and Amazon MP3 are encouraged to build their interfaces and priorities around hit singles. As a result, whenever I discover a new band and browse their albums to decide which to buy, the storefront interfaces often work against me, making it difficult to quickly find a band’s albums and navigate between a bunch of them for preview and comparison.

So I made this.

Disclosure: The iTunes links are affiliate links, and I will receive 5% of the sale price if you buy an album from Preview.fm. So buy a $9.99 album and I’ll get 50 glorious cents. Buy 20 of them and I can buy my own album! It’s like those terrible “Get 10 CDs free!” music clubs from middle school, but in reverse. (Some of my 10 free CDs in middle school: Trio, White Town, Erasure. Remember any of yours?)