My grandparents’ film camera finally stopped working, and they asked if I could choose a good digital camera for them. This was easier said than done.

Tiff and I compiled our ideal criteria:

Finding such a camera was amazingly difficult. Because digital cameras are popular consumer electronics, Google was abysmally useless. Honestly, Google should be embarrassed by how bad their search is when looking for product reviews and recommendations. Affiliate-marketing spammers have won. Extremely.

Snapsort was much more helpful. I narrowed it down to a handful of models that looked promising, including some of the new touchscreen cameras, but the internet couldn’t tell me which cameras had the best ergonomics or the easiest interfaces or the fastest autofocus motors. (At least, I couldn’t find honest opinions on these subjective criteria under all of the affiliate spam.)

So we went to B&H and played with nearly every point-and-shoot camera on the market.

It’s interesting how your criteria change when you’re shopping for a different type of customer than yourself. This was the most insightful shopping trip I’ve ever taken. The digital-camera industry, like many other technology industries, is completely ignoring this market. Almost nothing was simple, ergonomic, and low-needs, targeted at an audience that just wants to get something done without needing to care too much about the details.

And almost nothing that was relevant to us was advertised or easy to find online.

After an exhaustive search, we ended up with the Canon PowerShot SX120 IS. 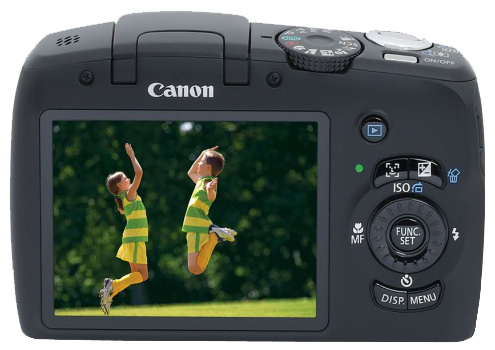 They instantly loved the huge screen. They were quickly able to figure out the controls, and I think they’re comfortable with playback.

It’s not perfect. I could do without most of the buttons on the back. If I were designing a camera for this purpose, it would look more like a VCR, with simple previous/next buttons and Play. That’s it. My grandfather asked what “DISP.” meant. He shouldn’t need to care, and he shouldn’t need to figure out how to change it back if he unknowingly hits it and the screen’s contents change to something unfamiliar. 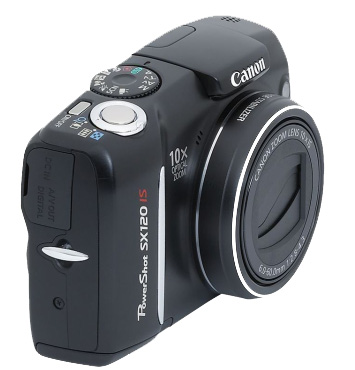 It’s very comfortable to hold. It’s amply sized, yet not bulky. It was one of the only cameras that had an appropriately sized spot on the back, in the upper-right, to place your right thumb while holding it. It uses normal AA batteries, and we got them some low-self-discharge NiMH rechargeables with a basic wall charger. Its “Easy” mode removes nearly all screen clutter, and its autofocus motor is fast enough that they can skip the half-shutter-press most of the time.

But the zoom slider is physically too difficult to press, partially because its center nub is too small. And the zooming action is too fast: my grandfather commented that it’s difficult to get exactly the right zoom level because it quickly goes past what he intends. 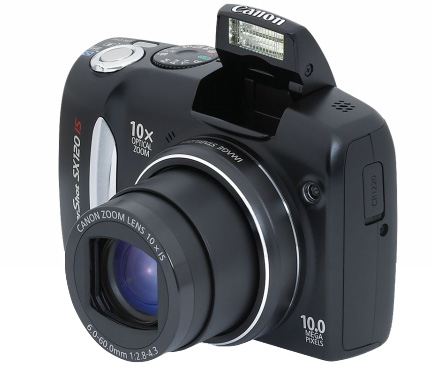 The flash operation is a happy surprise: just pull it up if you want the flash to automatically fire if needed, or keep it down if you don’t want the flash. Simple, tactile, obvious, and sensible.

Another major insight during this process was how nontechnical people can manage SD cards, storage, and backup. My mother got her first digital camera a few years ago, and she never reuses SD cards: she takes pictures until her card is full, and then she buys another card. When she downloads into iPhoto, she tells it not to delete the originals from the card.

At first, I tried to tell her that this was wrong and wasteful, but I’m glad that I lost that argument, because flash memory is very cheap and she now has a backup of every photo she has ever taken.

So The Grandparents Camera works the same way. I got two nice 16 GB SDHC cards for about $30 each, and each one will hold about 6,000 photos. I told my grandmother to take as many pictures as she wanted, and if she ever fills up both cards, to let me know and I’ll send her more. And Tiff told her that whenever she wanted to get anything printed, just bring the camera to a drugstore or camera store and hand it to a teenager working there, and they’ll know what to do.

I can confidently recommend the PowerShot SX120 IS as The Grandparents Camera, but I’m not sure how much longer you’ll be able to buy it. Point-and-shoot models are usually discontinued and replaced within two years, at most. And none of the other models from any brands seemed anywhere near as appropriate as this one to be The Grandparents Camera. I fear that soon, nothing will be a good choice for this. And this one isn’t even great for this purpose — it’s just good.

I bet there’s a huge market out there if a manufacturer made a great Grandparents Camera.