AnandTech calls the new MacBook Air’s SSD “Not Half Bad”:

Overall I’m pleased with Apple’s SSD selection. It could’ve been a lot better but it could’ve been a lot worse. The MacBook Airs in their default configuration have better IO performance than any other standard config Mac sold on the market today, including the Mac Pro.

This is much better than I expected.

There’s a big difference in performance between various SSDs. The worst ones can actually be slower than hard drives in some important operations, so you need to be careful when selecting one. Apple’s SSD offerings, to date, have been average (the optional SSDs in the MacBook Pro, iMac, and Mac Pro) to poor (the original MacBook Air’s SSD).

I had low hopes for the new Air’s Apple-branded, Toshiba-controlled SSD, but it’s actually pretty decent — and compared to SSDs used by Apple in the past, it’s great. It’s nowhere near an Intel or SandForce SSD (hey), but it’s still much faster than hard drives and most “bad” SSDs.

A lot of customers and tech review sites put too much emphasis on the sequential read and write speeds, but the differences in these benchmarks between various SSDs have little impact for most people. The most important benchmark for real-world SSD performance in most usage is the 4KB Random Read test: 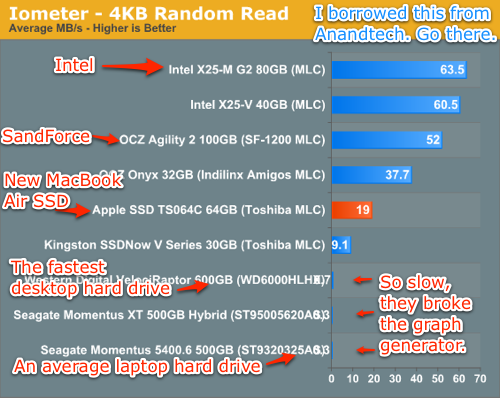 As you can see, standard hard drives perform so poorly in this benchmark — the most common operation that most people need their hard drives to do — that it’s no wonder that SSDs feel so much faster than hard drives. It’s not even close.

Most good reviews of the new Air have published only whole-system benchmarks and declared it faster than most shipping Apple laptops. I initially thought this was unfair because the other laptops weren’t tested with SSDs, and having an SSD is really what’s responsible for most of the new Air’s performance in these tests.

But the SSD options on the others are so expensive that most people won’t get them, so if the goal was to show real-world results, and the Air is the only laptop in the lineup likely to have an SSD in the real world, I guess such tests were accurate.