We got FiOS installed today. There was a convincing bundle with land-line phone service, and since both Verizon and AT&T have spotty coverage in the area, we took the option.

But we needed an actual phone to plug into the wall during the installation.

So, over Thanksgiving, my mother generously gave me her rotary phone from Brooklyn in the 1970s, which has been in full-time use for over 30 years: 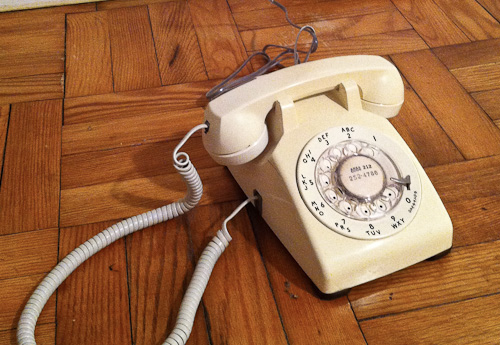 It’s a Western Electric Model 500. It still works flawlessly and has required no maintenance or repair at all except for a replacement cord every decade or so. (It even still has their old 212 phone number typed on the card in the dial hub.)

It rings satisfyingly and substantially, since there are actually two little bells in there that get struck with a little hammer, 10 times per second each, elegantly alternating with the 20 Hz AC ring current’s cycles.

These phones were owned by Bell and leased to customers (my parents presumably stole this one when they moved out of Brooklyn). This meant that the incentives were the opposite of today’s: Bell was encouraged to build the sturdiest, most reliable phones possible, because if anything went wrong, Bell had to send technicians out for repairs at their expense. Today’s awful plastic phones are lucky to last a day past their one-year warranties.

The FiOS technician didn’t even flinch when I pointed to this rotary phone, older than both of us, sitting on the floor in an empty room of an empty house, and said that it was the only phone we owned.

And I can report, for anyone curious, that rotary dialing works perfectly well on FiOS digital phone lines.