To date, I’ve relied only on my own speculation to estimate how many people used Instapaper on each iOS device, or with each iOS version. I didn’t think the exact numbers were worth the effort of tracking them — I just tested every version on my original iPhone before releasing it to make sure it was fast enough, and I’ve maintained 3.1.3 as my earliest supported iOS version (since original iPhones and iPod touches can’t run 4.x, and iPhone 3Gs really shouldn’t).

But there are so many new features and APIs that require 3.2 or 4.x that, at some point, I’m going to need to drop compatibility with iOS 3.1 and original iPhones.

In Instapaper 3.0 for iOS, I added device and OS-version reporting when the app communicates with the Instapaper service so I could get a better idea of who my customers were and when I can drop support for older devices and OSes.

This information might be useful or interesting to other developers, so I’ve decided to share it. Keep in mind that this sample does not represent all iOS owners. Specifically, it only represents people who:

So it’s very useful to me, but the usefulness to you will vary. With that out of the way: 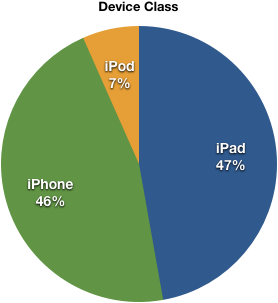 I knew Instapaper sold well to iPad owners, but I didn’t know it was half of my business. (I also overestimated the iPod slice.) More specifically: 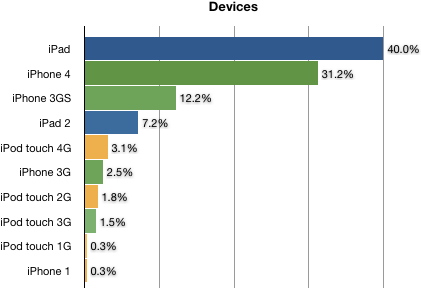 The biggest surprise here is how modern the devices are. It also looks like I don’t need to care as much about how the app performs on the first-generation CPUs:

I think this is a combination of factors:

Now, for the more important distinction: which versions of iOS are my customers running? Specifically, how many of my customers are running at least a given version that I’d like to target as my minimum supported version? 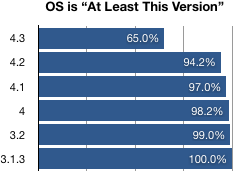 Keep in mind, of course, that the current minimum supported version is 3.1.3, so I can’t count anyone who’s still on an earlier version than that. (Hence, 100%.)

This was great news: it looks like I can comfortably raise the minimum to 4.0 whenever I want to start using a 4.0-only feature in a way that can’t be easily disabled when running on earlier versions.

But 4.x wasn’t available on iPads for a few months after it was released for iPhones. What about OSes on each device class, separately? 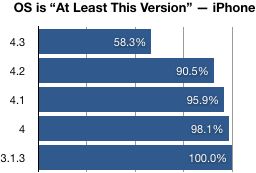 This was a nice surprise — I mistakenly thought iPad owners would be slower to update their OSes since there’s less motivation to sync the iPad often. But the results say otherwise.

And, for fun, since they’re reported as different devices, how well is the iPad 2 selling in its three connectivity options? 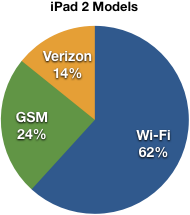 Anyway, I hope these stats can be helpful to you. They’ve certainly been helpful to me, and many of my assumptions were proven wrong — all in good ways.