I love Apple’s Magic Mouse, but replacing the batteries every few weeks is slightly inconvenient. To minimize waste, I use low-self-discharge NiMH rechargeable batteries and a bulky Sony charger (functionally identical to Apple’s rechargeable kit, but big and ugly). But I thought it would be nice to just charge the mouse directly when I’m not using it, like the old Logitech wireless mice that I loved so much a decade ago.

The Mobee Magic Charger elegantly tries to do this: 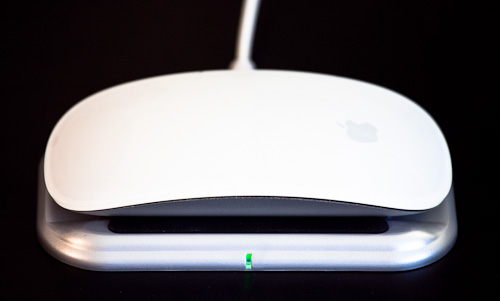 (Update: I’ve now learned that the base is upside-down. Oops. I removed the comment about diagonal charging. The rest stands.)

…but fails, for two main reasons.

First, despite having a small, low-profile design that conveniently charges over USB (and therefore has no power brick and can plug into pretty much anything), it doesn’t work very well.

To use it, you need to replace the battery door and batteries (right) with Mobee’s all-in-one induction-rechargeable unit (left): 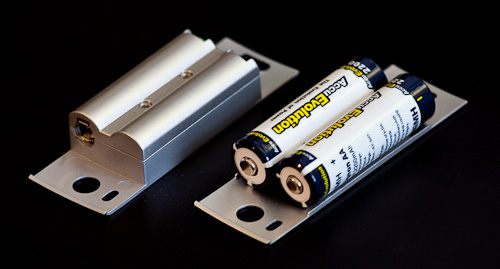 So there’s a minor annoyance: you need to keep the original battery door somewhere in case you ever want to stop using the Mobee.

A bigger problem, as you can see, is that they only had space for AAA-sized cells instead of the usual pair of AAs. The total runtime between charges, therefore, is far lower than using normal batteries. You can probably get a couple of solid days of use out of it, but you really need to remember to charge it very often.

The OS’ battery-level reporting isn’t accurate with it: the fully-charged Mobee pack reports as 46%, and it dies sometime between 18% and 29% (often, therefore, without warning).

Charging is slow. If it dies, you better just put it in the charger and go to bed. You’re done for the night. (I’ve had to swap my original door and batteries back into it a few times to continue working, defeating its purpose.)

There are also build-quality issues: most notably, it doesn’t quite fit properly. During use, it will regularly get dislodged for a second and disconnect from the computer.

But the other major flaw is that even if this worked perfectly, I don’t think I’d want to keep using it. Easily replaceable (and rechargeable) AA batteries are just more practical, even though I thought otherwise before buying the Mobee:

So, in practice, the Mobee isn’t more convenient, and because of its quality issues, I can’t recommend it.