I’m a huge fan of the Puerto Rico board game: it’s one of the best-known (and one of the best) European-style board games, a category finally becoming popular in the United States with the success of Settlers of Catan.

Unlike most games popular in the U.S., this genre is known for relying much more on strategy and less on luck. Settlers of Catan is actually more of a hybrid in this way: I’d say it relies on luck about as much as Monopoly does, in that even a great strategy can be sunk from a streak of bad luck with the dice.

Puerto Rico is almost pure strategy, with only two relatively inconsequential random elements — the plantation tiles available in each Settler phase, and the initial play order (who goes first) — and the game effectively minimizes and balances the impact of these. It’s no surprise, then, that it dominated BoardGameGeek’s top-ranked list for most of the last decade.

It requires at least three people to play, so a geeky board-game couple like us can only play it as often as we can convince someone to come over and learn it. Everyone we’ve taught to play1 loves the game, including non-geek friends, parents, and siblings, but there are a lot of pieces and a lot of rules. It’s of similar complexity as Settlers of Catan and is therefore best taught virally: you play with someone who knows it and explains it as you go. That’s how I learned (thanks, Andrew!), and I can’t imagine three people sitting down and trying to figure it out from scratch.

As soon as I learned that there was an upcoming Puerto Rico iPad game, I was thrilled: I could finally play this awesome game more often than the twice a year or so that I could convince enough people to play. Plus, the iPad is an excellent board-game platform, so why not port an excellent board game?

I’ve been testing an advance copy of Puerto Rico HD this week, and it’s now available in the App Store. In short: Fans of the board game are going to love this. 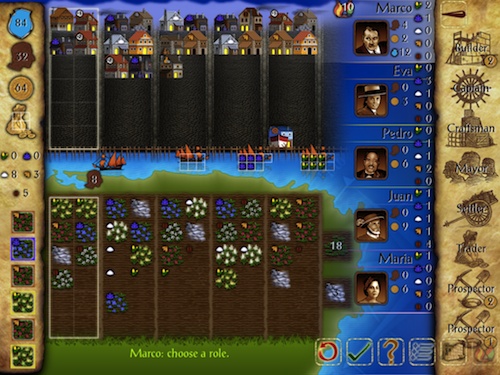 Click for big. Or see later in the game.

The board game’s assortment of cards and tiny pieces makes for a huge interface challenge. While there are some small things I would have done differently, Codito Development did a pretty good job with this. It’s clear that they really care about doing the game justice: it’s nothing like the half-assed licensed ports that we usually see from well-known board-game brands.

I was worried that such a complex game wouldn’t have a very good AI, but this AI is excellent. I win regularly against the Medium opponents, but the Hard AI players beat me often. It’s the perfect balance of AI skill without making the game too easy or frustratingly difficult. Single-player is therefore very satisfying, and I can play a speedy game in about 15 spare minutes.

I didn’t have a chance to try the online multiplayer via Game Center, but while it doesn’t support asynchronous turn-based play with multiple simultaneous running games (like Words With Friends), the developer has hinted that it might get this feature in the future.

Tiff and I did play some hot-seat games (both of us taking turns in front of one iPad), and it works extremely well, with the ability to mix any number of human and AI players.

A nice little trick makes hot-seat play exceptional: in the player setup screen, you can tell it which side of the iPad each player is sitting on, and it automatically rotates the interface to face each player on their turn. (Only the two landscape orientations are supported.) That way, if you’re sitting at a table, you can lay the iPad flat in the middle and play comfortably without rotating it constantly. And you can comfortably watch your wife decimate you by buying a wharf and a harbor and shipping out incredible quantities of corn.

Playing the physical board game is an hour of tangible fun with friends or family; playing the iPad game is 15 minutes of amusement with any number of friends (including zero), no setup, and no cleanup. Neither replaces the other. One of the best uses for the iPad game is improving your skills and discovering new strategies to make your real-world gameplay more interesting.

I love that this game is finally available for iPad and we now have that choice.

My only hesitation is that I don’t think I could recommend the iPad edition to people unfamiliar with the board game. Maybe it’s just me2, but I don’t think this would be an easy game to figure out on your own in an app, through no fault of Codito or Ravensburger. The game does have a built-in tutorial, strategy suggestions, and complete instructions, though, so I’m curious: if you’re able to figure out how to play from the app with no previous experience with the board game, please let me know.

If you’re familiar with the board game, or you’re confident that you could learn it from the app, get it from the App Store now. It’s a great, solid iPad adaptation of the best board game I’ve ever played.