Studio Neat, known for the Glif iPhone stand, recently finished their second product: the Cosmonaut wide-grip stylus for “touchscreens”. They’re trying to be inclusive, but I think it’s obvious that this is designed for the iPad, so I photographed mine in its natural habitat: 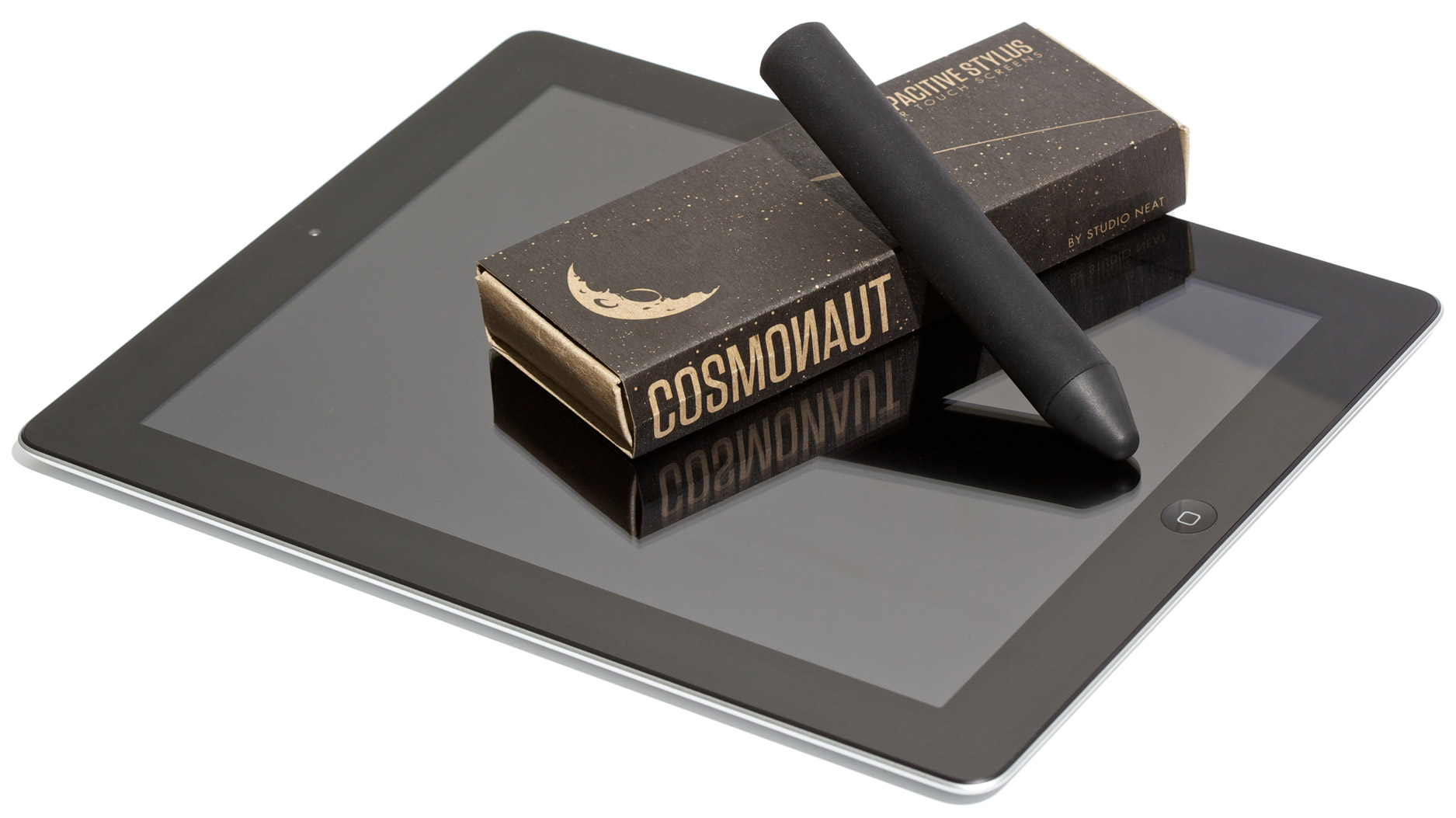 They explained the design on Kickstarter:

The Cosmonaut was born out of our desire to have a really great stylus for our iPads. We love to sketch out quick ideas or doodle on our tablets, and using a stylus is much better than a finger for such tasks. We bought several different models currently available on the market but they all suffered the same problem: they were designed to look and feel like a pen. But why? Writing or drawing on the iPad feels nothing like using a pen or pencil. For one, tablets are ideal for low fidelity sketching. Also, it is pretty awkward to rest your palm on the screen of the device because it throws off the capacitive detection. Writing on a tablet feels like writing on a dry erase board: fast, simple, low fidelity. The perfect tablet stylus is one that feels like a dry erase marker.

I backed it on Kickstarter as soon as I saw it last spring (along with a lot of other people), and it’s finally here. Anyone can order one, starting today, for $25.

I’ve tried a lot of iPhone and iPad styli, and I haven’t liked any of them before. But this one’s very different.

The capacitive screens on our favorite touch devices don’t respond to pressure, like old plastic-stylus PDAs. Instead, they can only detect a blob of electrically conductive material, like a human fingertip, being pushed against them.

The tips of most other capacitive-screen styli are little blocks of conductive foam. That arrangement sucks: it feels like writing with a sponge. And the little sponges are usually attached to too-short, too-lightweight barrels that just feel flimsy and unsatisfying.

The Cosmonaut is built completely differently, and it exudes quality.

There’s no foam anywhere in it. The soft rubber tip gives slightly when pushed, because there’s a small air pocket between it and the solid aluminum core. Here’s a cross-section photo: 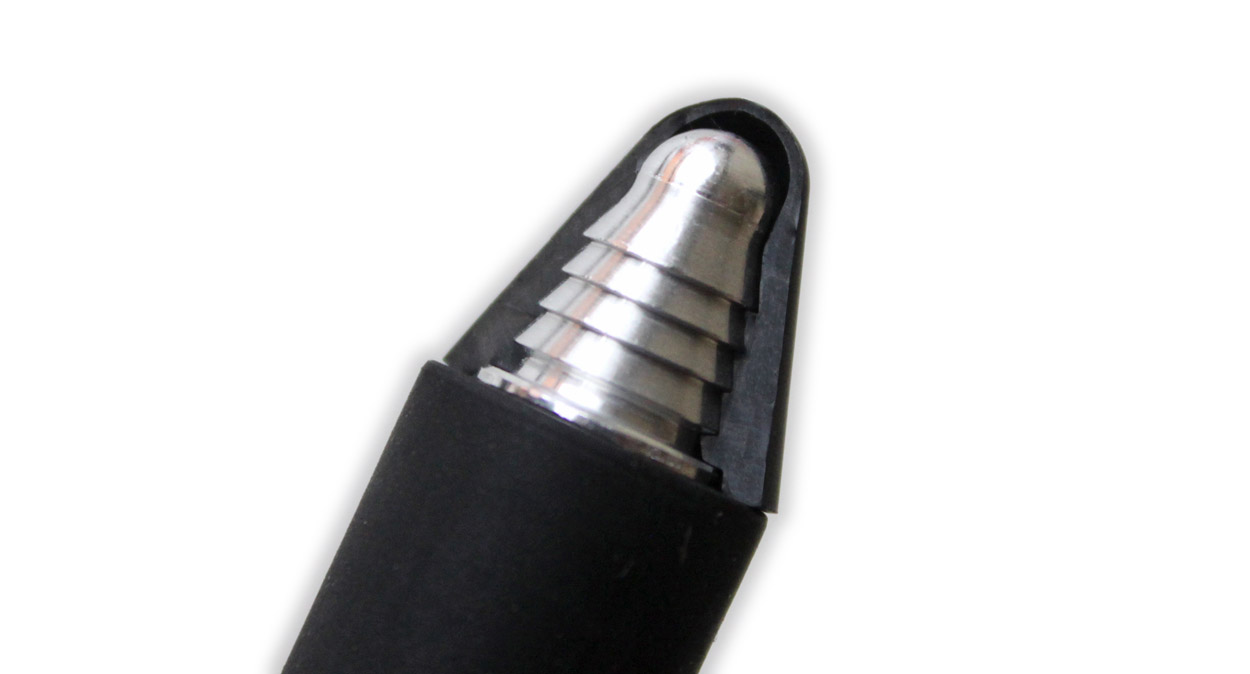 Photo courtesy of Studio Neat, since I didn’t want to cut my Cosmonaut in half.
See more construction details in their video.

Writing with the Cosmonaut is satisfyingly firm and perfectly controlled, and it glides over the screen perfectly. I can’t really describe the gliding feel any better: it’s just perfect. When you use it for the first time, you’ll notice this immediately. (100% of the people in my household did.)

It’s noticeably heavy (45g), at about the same weight as five of these Pilot Precise V7 pens (49g): 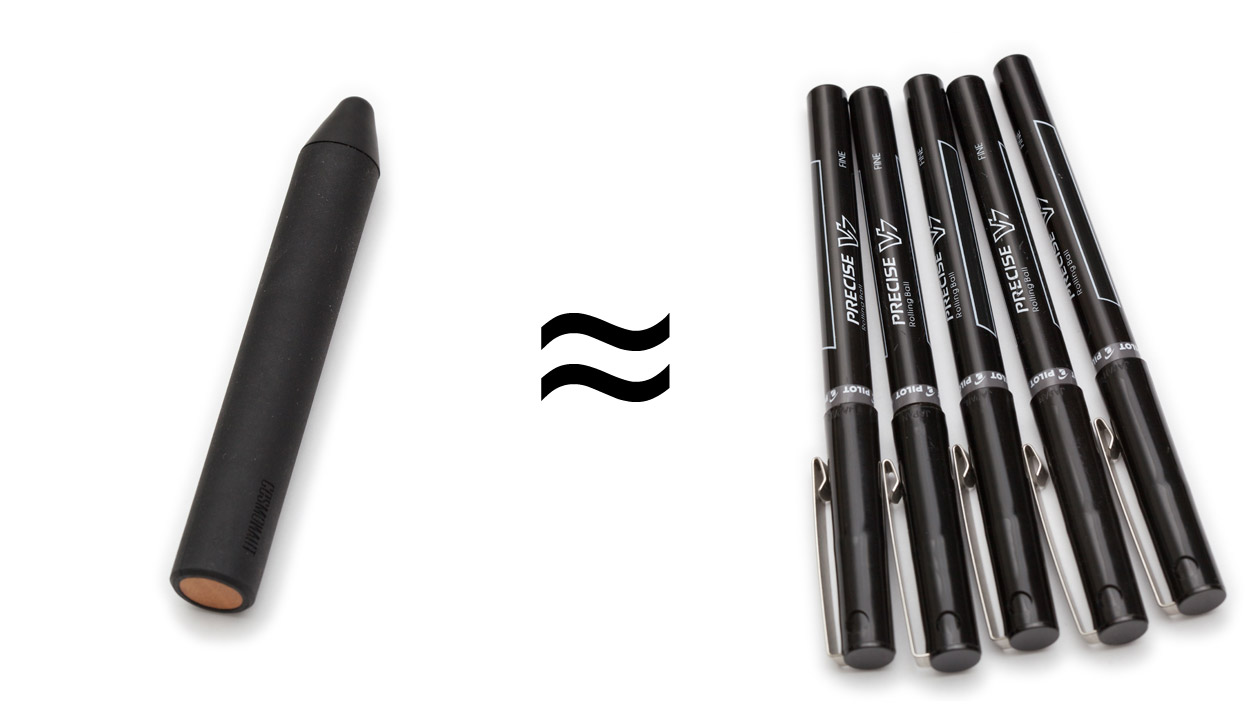 The weight and thickness make it surprisingly easy and satisfying to manipulate. I have no trouble at all hitting tiny, precise touch targets very quickly even when I need to jump across the iPad’s screen to get there. But after a long doodle, I felt slightly fatigued, possibly because of the weight. (Someone who uses pens more than I do probably wouldn’t have this problem.)

Most styli with the traditional shape encourage you to hold them the same way you’d hold a pen: firmly and close to the tip. This often causes your hand to inadvertently rest on the screen, confusing the input to the app and often resulting in errors. The Cosmonaut’s size and shape encourage you to hold it the same way you’d hold a dry-erase marker when writing on a whiteboard: further up the barrel, with a loose grip, and with your hand floating far above the screen. I’ve never found myself accidentally resting my hand on the screen when using the Cosmonaut.

This is definitely for tablets only, as Studio Neat suggests. It technically works on the iPhone (and even my MacBook Pro’s touchpad), but it’s like using a big Sharpie on a Post-It note — there’s not enough space to do much, although you could use it in a pinch to operate an iPhone while wearing gloves. It works acceptably on the 7” Kindle Fire and Nook Tablet, but it really needs the space of the 10” iPad to shine for most uses.

So what are its uses?

I got to play with it for about ten minutes before my wife “borrowed” it. I didn’t see it again for an hour. 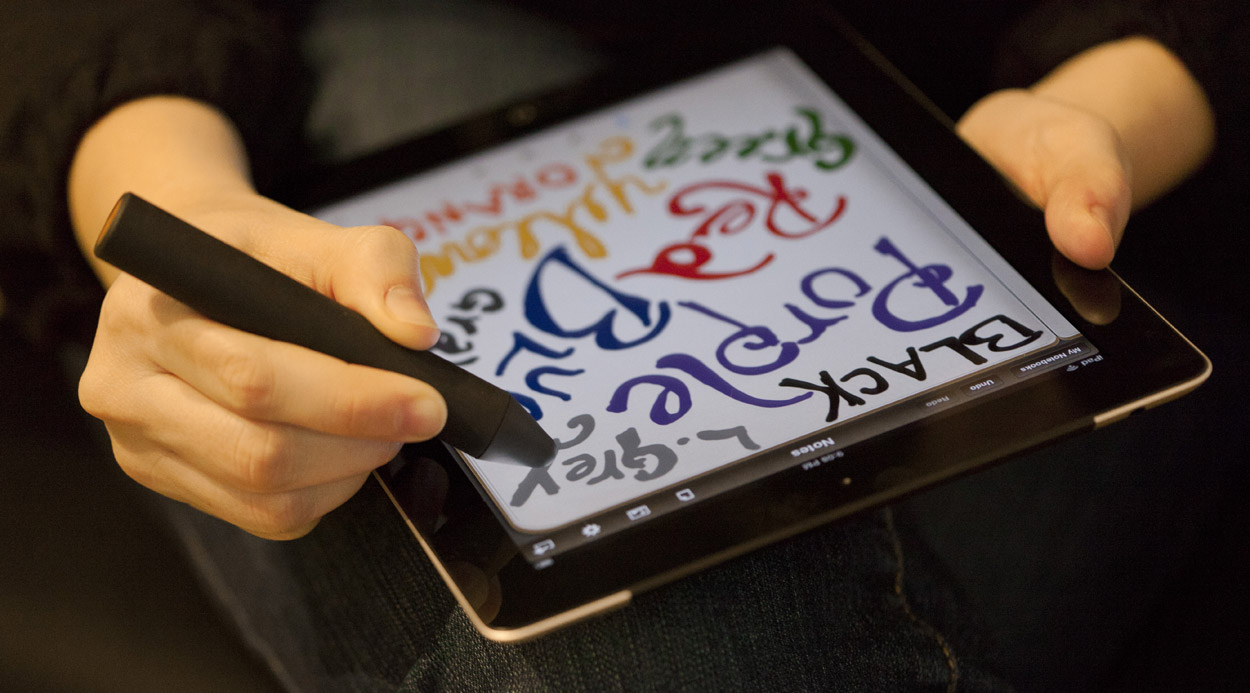 The Cosmonaut is the only capacitive stylus I’ve wanted to use for more than thirty seconds. The others were novelties, but this is a truly useful tool. It’s excellent, and I’m going to start bringing it in my computer bag.

I’m not an artist, but I bet artists and doodlers will love it. It works amazingly well in Penultimate (pictured above).

I’m not a note-taker, but I bet note-takers will love it. It works very well with Note Taker HD, and MyScript Memo’s transcription is amazingly accurate.

And any Pictionary-like game would be a lot of fun with it.

But I think the best use of the Cosmonaut is exactly what Studio Neat intended: quick whiteboard-style sketching. That’s how I plan to use mine… once we’re done doodling in Penultimate.

Update, March 2012: The Cosmonaut is awesome with Draw Something on iPads.