Why is it that your choice of smartphone platform incites so much irrational anger and so many accusations of being a “fanboy” from people who use a different one?

Normal people own, at most, one mobile phone at a time. Typically, they own the same one for 1–2 years. And smartphone owners often remain loyal to a platform for a few consecutive phone purchases. Therefore, most people can’t reasonably equivocate and get them all: they need to be decisive, and then they’re stuck with their decision for a while. 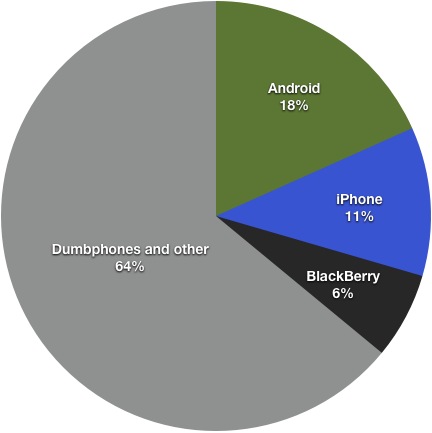 If you publicly express an opinion that any particular platform is best for a significant portion of buyers, you’re effectively saying that the people who chose differently were wrong. Most people don’t like to be wrong.

And because it’s such a massive and divided market, any stated opinion will cause this reaction from a lot of people. If, for example, you say Android is best for any common set of goals, a lot of people might get upset: 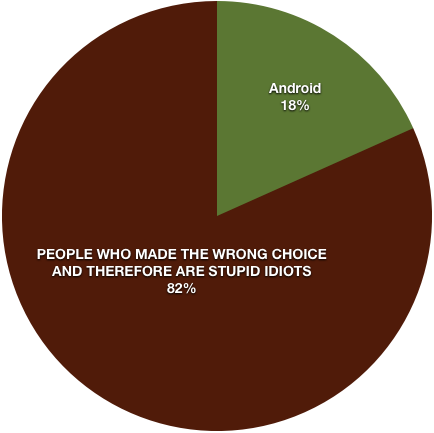 Not seeing this implication requires more open-mindedness, empathy, and attentive reading ability than many people have. So no matter how much you wrap it in qualifiers or try to be constructive, a lot of people are going to be insulted if you say something good about the thing they didn’t choose — and it’ll be even worse if you say something negative about the thing they did choose.

This is one reason why so many big publishers are so opinionless and seem to like everything. Saying you don’t like something, or that any choice is clearly the best for most people, will cause enough people to stop listening that the precious metrics that pay the bills might decrease.

When people get defensive over their choices that you inadvertently cast doubt upon, and they don’t want to admit (to themselves or anyone else) that they made the wrong decisions, they will often attempt to convince themselves (and possibly everyone else) that your opinions are invalid by discrediting you.

Hence, fanboy: a derogatory term that means someone who is blindly and irrationally devoted to a product that I believe is inferior to what I bought when faced with a similar choice, and whose opinions and arguments can therefore be completely disregarded.

I used to attempt to defend myself against accusations of being a fanboy, but I just don’t care anymore. It’s impossible to express a useful opinion to any significantly sized audience without inadvertently angering someone enough to hurl irrational insults at you.