They’re big, they’re complicated, they’re ugly, they’re harsh to look at, they usually need a warm-up period before reaching full brightness and proper color, they contain traces of (highly toxic) mercury, they’re fragile, and they don’t work well on dimmers. And they often stop being useful long before their stated lifespans because their color shifts or they lose brightness.

But they use much less energy than incandescents, they’re (now) inexpensive, and they’re a great way to get much more light out of a fixture than its maximum wattage previously allowed — as long as you don’t mind waiting for the warm-up. So for certain uses, they can be great. But they’re a poor choice for a lot of household roles, including any exposed bulbs (too harsh, too ugly) and any area that’s usually only lit momentarily such as bathrooms, hallways, and closets (not enough time to warm up).

LEDs share some of the downsides of CFLs. They’re often bigger, uglier, and more harsh-looking than what they’re replacing, and they don’t dim very well. They aren’t bright enough to replace high-wattage bulbs yet, and they’re very expensive up front. But compared to CFLs, they use much less energy, they’re simpler, they don’t need time to warm up, they’re much more durable, and they don’t contain mercury.

I wanted to try LED bulbs, but my Amazon research only found divided opinions and a lot of uncertainty. With no clear “winner”, I decided to buy four of the top-rated choices fitting my criteria, figuring I’d buy more of whichever I liked best and find tucked-away homes (closets, the utility room, the basement) for the crappy ones.

I also wanted to somewhat objectively compare the LED bulbs to non-LEDs. Here’s the test set:

My setup is fairly reproducible if you want to compare my photos with other bulbs: I photographed them in an otherwise dark room against a white wall at 100mm, ISO 400, f/4, 1/100th with white balance set to 5000K. I put a piece of cardboard behind them for the “Off” pictures to make them more visible against the wall.

(This is a Javascript image switcher. View on the full site to see and compare the bulb photos.) 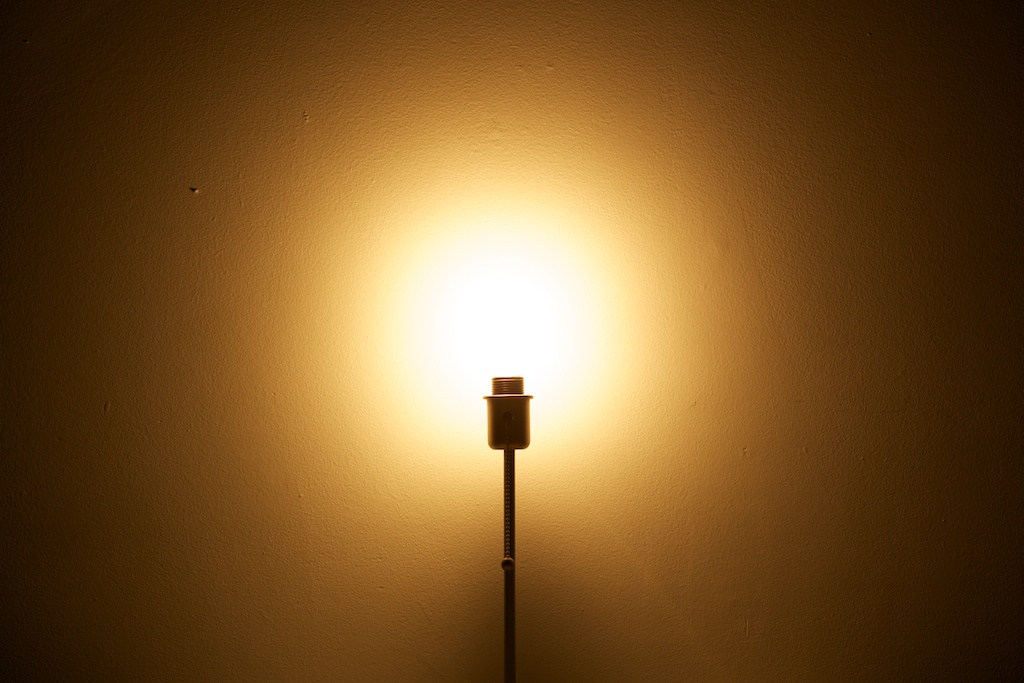 These are great. We’ve used them around the house for over a year in various fixtures, and they really shine (no pun intended) in applications where CFLs or LEDs would be too ugly or harsh-looking, such as an exposed downlight fixture like those often found above bathroom sinks. (That’s where we use three of them.)

They’re available everywhere, and they’re visually and functionally almost indistinguishable from normal incandescents. They’ll work almost anywhere an incandescent would work. The “Natural Light” was too cool-colored for most of our uses, but the “Soft White” is perfect almost everywhere in the house. And if the U.S. bans traditional incandescent bulbs, these save enough energy to still be permitted under current regulations.

But they don’t last very long by today’s standards: expect to get about a year out of them. And while they’re more expensive than incandescents, they don’t save nearly as much energy as CFLs or LEDs.

I love this bulb. It outputs omnidirectional light, it’s almost as small as regular incandescents, and it’s one of the most normal-looking bulbs in the batch. It’s even nice enough that I’m using it for a couple of partially-exposed bathroom downlights.

But it’s only bright enough to replace approximately a 45W incandescent, and at about $35 each, it’s not a good value for that amount of light. Its color, while not as cool as “daylight” bulbs, is noticeably cooler than “warm white”. I estimate that it’s around 3000K. I love the color, but if you prefer warm, yellowish light, you might not like it.

A lot of people really love this futuristic-looking yellow bulb. I expected greatness from it, but I was disappointed.

It’s one of the best bulbs I’ve tested for brightness, omnidirectional light, size, shape, and value. But the color is off: in an attempt to match the subtle yellowish tint of standard “soft white” incandescents, it has gone a bit too far, which the photos clearly show when compared to the incandescent.

The AmbientLED is distractingly yellow, almost orange, and it casts subtle, strange, almost pink tint on nearby objects. Rather than looking warm and natural, it looks artificial, like the sucralose of warm-white lighting. I generally like cooler-colored light, but even my wife who prefers warm light disliked the AmbientLED’s color.

This was mediocre. It produced decent output and color, but it was too large to fit in some of my fixtures, and its light output is extremely directional, which makes it inappropriate for a lot of uses that I tried, such as table lamps, frosted-glass downlights, and ceiling fixtures that align the bulbs horizontally. The effect is particularly visible in the “Lamp” photos: the bottom half of the lampshade remains dark.

It also had the cheapest-feeling body, and it’s the only LED bulb I tested that didn’t have a heatsink-like base design. I’m skeptical that the smooth metal base can dissipate enough heat.

The EarthLED is like a better-implemented version of the G7 Power LED: it’s smaller and brighter with a better build quality, the color is a bit warmer, and it’s subjectively the best-looking bulb I tested. But it shares all of the G7’s downsides of directional light output.

If I had a good use for a directional LED, I’d choose EarthLED over G7 Power.

Dimmable LEDs (and CFLs) are a huge mess of bad hacks, broken promises, and disappointment.

I haven’t addressed it here because finding dimmable LED or CFL bulbs and compatible dimmer switches is a huge pain in the ass, and it usually doesn’t work very well. If you want to use dimmers, you’re much better off sticking with incandescents and halogens.

If you really want to use energy-saving lights, consider changing your habits (and possibly your lighting arrangement) so that you don’t need dimmers. It’s very unlikely that CFLs or LEDs will work significantly better with dimmers in the future.

I love the GE Energy Smart LED, but it really needs a 60W-equivalent version to be competitive. That said, I’ve already bought a few more of these because I like them so much. They’re great for table and night-stand lamps. If you have two- or three-bulb ceiling fixtures that don’t need a ton of light (and you can handle the high price), you can try these in there too, although it may not be enough light. I put them in a pair of 3-bulb ceiling fixtures in an 18-by-15-foot room, and it’s barely enough light, but these lights are on so often that they’re going to pay for themselves quickly in electricity savings.

I can’t recommend the Philips AmbientLED. The color is just too weird. But Philips is pushing LEDs forward very aggressively, and I bet they’ll have a more broad general-purpose LED lineup in the near future. I’d love to see Philips offer a cooler-colored option.

If you’re considering a directional LED such as the G7 Power or EarthLED options, make sure your intended fixture can handle directional light without looking stupid. After I finished taking all of the photos for this review, I tried finding permanent homes for all of these bulbs around the house. Since they’re so directional, the G7 Power and EarthLED are the only two for which I haven’t found good spots yet.

For exposed bulbs, dimmers, and other applications for which LEDs and CFLs are poorly suited, the Philips EcoVantage halogen-incandescents are great. They’re not quite as energy-wasteful as regular incandescents, and they have almost no other drawbacks or limitations.

Where does this leave CFLs?

Even with LED bulbs maturing, CFLs still have a role: they’re much cheaper than LEDs up front, and they still offer the highest light output options for most fixtures, as long as you can physically fit really big CFL bulbs and don’t need to look directly at them.

But LEDs can now take over in fixtures intended to be used with 40W or 60W bulbs. And once LEDs can practically and economically replace 100W bulbs, CFLs will lose a lot more ground.

I may have purchased my last CFL.