I complained on Twitter, and this sounds like a widespread issue with AirPort Extreme Base Stations and Time Capsules running the newest firmware, version 7.6.3. A number of people said downgrading to 7.6.1 completely fixed the issue for them, so I tried it.

I didn’t even know how to downgrade. Here’s how: in AirPort Utility, hold Option while hovering over the firmware version, and it becomes a drop-down menu. Pick whatever firmware you’d like and click Update. (warning: at your own risk, I don’t know, etc.) 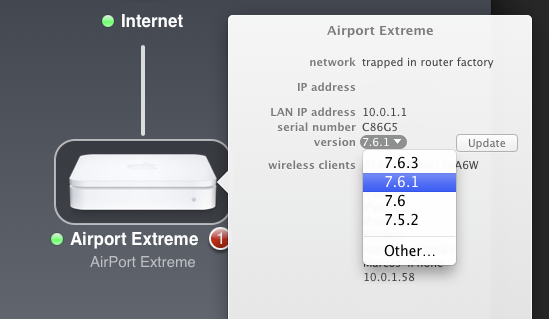 I did this five days ago, and the problem hasn’t recurred once. A few additional people since then have reported similar results.

If you’re having this problem, downgrading to 7.6.1 may fix it.