Amazon announced this week that it’s increasing the price of Amazon Prime from $80 to $100 per year, its first price change since its introduction in 2005.

This has not been a popular decision, to put it lightly, but most Prime customers — which I’ve been since 2005 — aren’t really going anywhere. There’s nowhere to go. Amazon has either destroyed or bought every competitor that has ever come close to its retail business.

Prime customers should hardly be surprised at the price increase — the service has been getting worse for the last few years at an accelerating pace. Overnight shipping, previously $3.99 on anything from toothpaste to televisions, is now variably priced so it’s no longer worthwhile on even medium-sized items. “Add-On Items” was spun as a huge addition to the Prime catalog, but it also excluded thousands of existing items from small purchases that were previously available with no restrictions. For shipping, Prime is a worse deal now than it has ever been.

Its shipping deals always felt unsustainable, so in the absence of other changes, I’d feel that the extra $20 per year was justified. But I suspect the changes to overnight rates and Add-On Items would have been enough to keep Prime’s shipping costs sustainable, and these haven’t been the only changes. The biggest annoyance recently is that Prime members are now being forced through this sleazy interstitial ad between checkout steps: 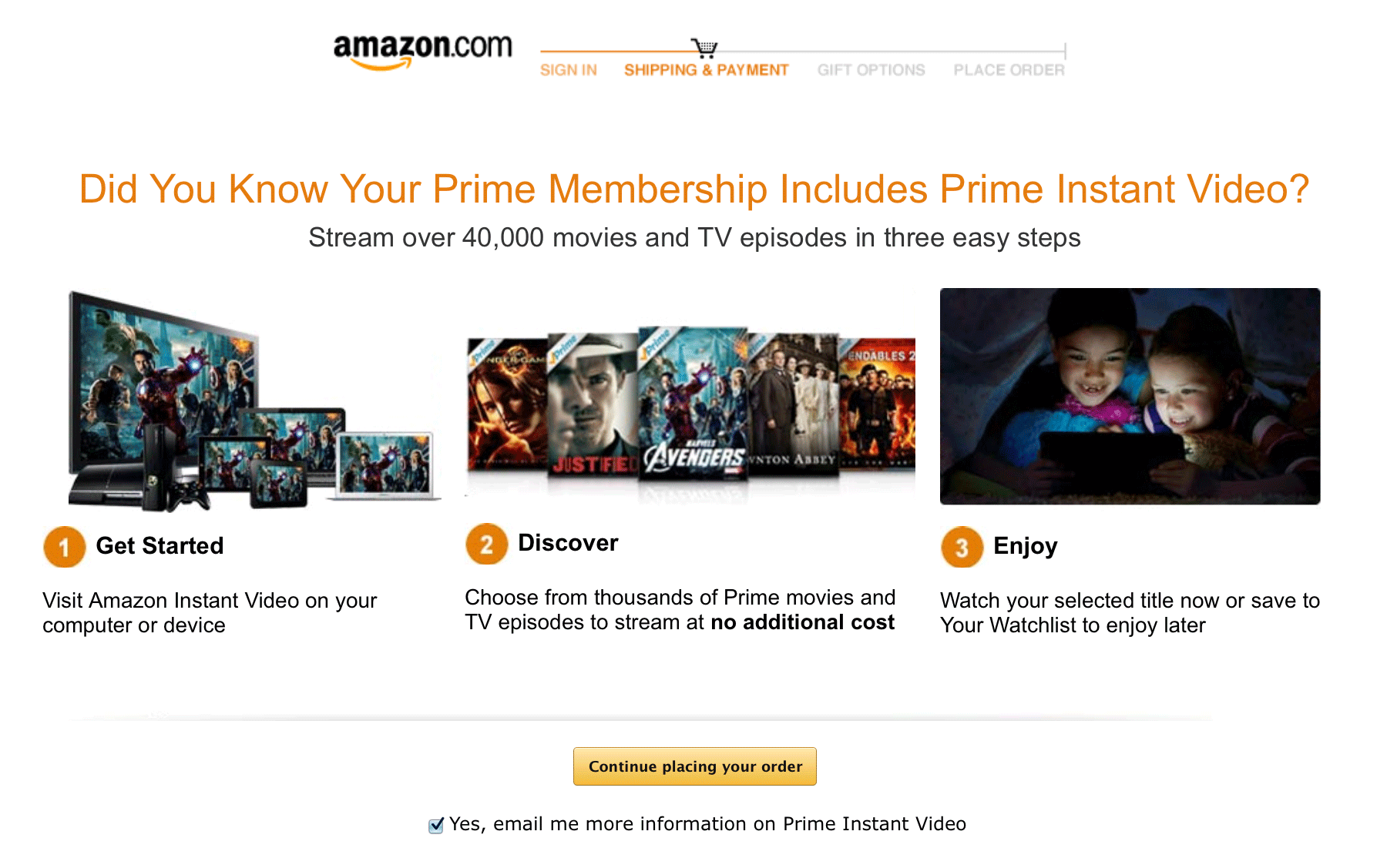 Showing this once is bad enough, but I see it regularly. Amazon is now annoying their best customers with desperate, obnoxious, tricky interstitial ads. (Of course, the checkbox is checked by default.)

Maybe the reason Prime economics have become tricky is because Amazon bundled in a video service nobody wants since 2011, leveraging one business’ extreme success to juice the numbers of one that’s faring poorly against its competitors. Netflix charges $95.88 per year for a similar service. How much of Prime’s price hike was really to help pay for the video service that’s just a tax on Prime members who have never used it and don’t want it?12

This isn’t just an Amazon problem. In the last few years, Google, Apple, Amazon, Facebook, and Twitter have all made huge attempts to move into major parts of each others’ businesses, usually at the detriment of their customers or users.3

Google, the geek world’s undeserved, unquestioned darling for well over a decade, has made all of its core products worse by forcefully shoving Google+ into them. They’re leveraging extreme success from some businesses (search, email, maps) to juice the numbers of one that’s faring poorly against its competitors (Google+). Sound familiar?

Apple’s Maps is still worse and has fewer features than Google Maps, which was previously integrated better into the iPhone and didn’t enable as much Google tracking creepiness. Not anymore. (Although I think the fault of this is shared between Apple and Google.) Many of Apple’s other applications and services have suffered as well as they’ve spread themselves too thinly and competed on more fronts.

The battle between Twitter and Facebook has made both products worse and caused weird restrictions to users on both sides, such as the walls both companies have installed between Twitter and Instagram. Twitter is now ultra-paranoid, defensive, aggressive, and full of annoying ads. Facebook’s core product is a mess as it continually tries (and fails) to capture the usage and style of Twitter, while annoying people more and more to keep its ads effective. (At least Facebook is consistent: they’ve always been getting worse.)

Amazon making its retail business worse to prop up another part of its ecosystem shouldn’t be a surprise to anyone. Amazon doesn’t want you to be only a retail customer anymore, and they’ll keep making it harder to be.

They want to lock everyone into everything. Just like everyone else. And we’re all worse off for it.