I really thought I’d like the V-Moda XS headphones.

Last week, I argued that for portable headphones, sound quality takes a back seat to practicality. I knew the XS wouldn’t be as small as my favorite portable set, and I knew it wouldn’t sound as good as many full-sized models, but its reviews have been stellar as something in the middle.

When they arrived, I found the design a bit off-putting, mostly from all of the exposed screws.1

They’re much larger than I expected, and they’re very heavy for their size — at 195g, they’re slightly heavier than the larger Sennheiser Momentum and Bose QC-15.

The earcups don’t rotate to fold flat like many models. Instead, they swing upward and click into the headband cavity. This lets you fold them into a fairly small “ball”, but it won’t fit in most jacket pockets, and it’ll be awkward in small bags.

Here’s how they compare to some other portable headphones, plus a full-size set for perspective. The V-Modas are in the middle:

Same headphones, folded. See why I like the Sennheiser PX line? 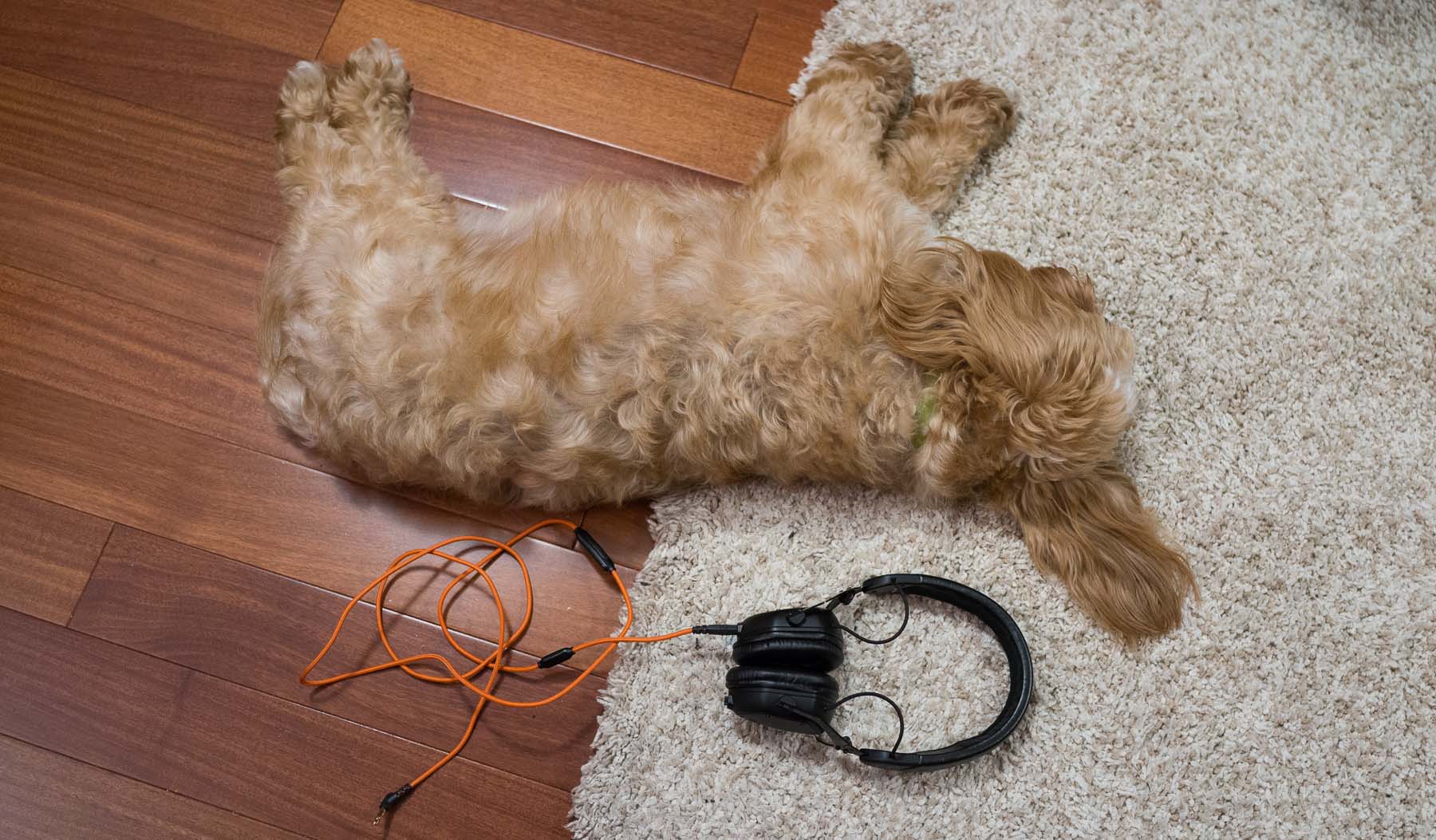 Tired, fluffy dog for scale, in case you also have one to compare against.

Most small headphones are on-ear designs: their earpads rest directly on the ears. Larger models can use over-ear earpads that form circles around ears, resting on your head instead. Over-ear designs are usually much more comfortable, especially for long spans, and isolate better. And generally, the lighter the headphone, the more comfortable it can be.

The XS is an on-ear design, but it’s a very large one — possibly the largest I’ve seen, and almost certainly the heaviest.

The earpads concentrate their pressure in a thin outline ring on each ear. With most comfortable headphones, you can quickly forget that you’re wearing them. With the XS, I can never forget, and I never stop feeling that pressure outline on my ears.

I find them very uncomfortable after a few minutes.

The XS is socketed, so the cable is replaceable and can be inserted into either side — a big win for practicality and longevity.

The cable is orange. Fun.

But it’s also too thick and too stiff, which makes it annoying to maneuver. The diagonal plug is strange, bringing the worst of both worlds: most of the awkwardness of a right-angle plug, with most of the protrusion of a straight plug.

The clicker is only one-button, and it’s a separate module further down from the microphone at roughly breast level when worn. Since it’s so far from the usual neck-level placement, I can’t access the clicker if I tuck the cable under a shirt or jacket.

Since it’s replaceable, I could just buy another cable from someone else. But who? Good replacements with a 3-button iPhone clicker are hard to find, most are either terrible or stupidly expensive, and there’s no guarantee that they’ll fit through another model’s narrow socket-surround. A replaceable cable is mostly only useful to replace with the same one from the manufacturer if yours breaks or fails.

Bass is a bit too strong and imprecise, and often gets boomy enough to mask other details. Upper treble is weak, making everything sound slightly muffled and muddy. But neither are extreme enough to be fatal, and neither are uncommon in small, closed headphones. You can get better-sounding closed headphones at this price, but they’re going to be much larger.

Overall, the XS sounds very good for its size. I’m impressed with its sound.

But it’s a strange size that brings the worst aspects of on-ear and over-ear together. It’s almost the size, weight, and price of a small over-ear model, so it misses much of the portability and practicality of many smaller on-ears. Its mediocre cable reduces the practicality even further, and its design is… “polarizing”.

For me, the biggest problem is simply comfort. I can almost still feel the hexagonal earpad outline pressed into my ears.

Ultimately, I decided to return the XS.