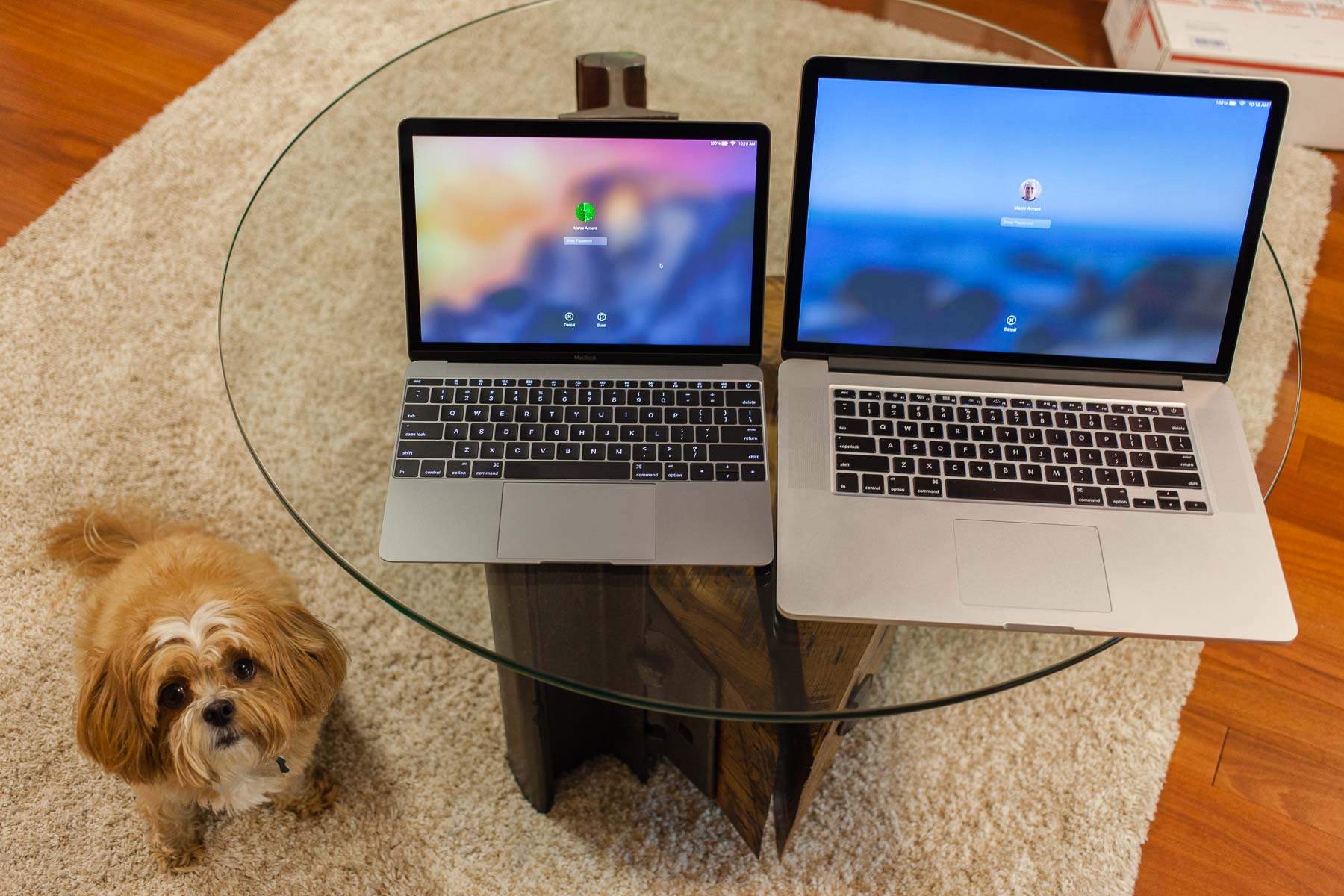 MacBook “One”, 15-inch Retina MacBook Pro, and Hops for scale.

As a kid, I impulse-bought Marble Madness for my Sega Genesis. I saw it in Electronics Boutique, the box looked really cool, and it was only $40. Without having read any magazine reviews, I took the chance. It ended up being the worst Genesis game I owned.

I also impulse-bought the first Retina MacBook Pro. I didn’t want to wait weeks for a custom build, so I drove to the Apple Store and bought the base model.

That $2200 computer was one of the best technology buys I’ve ever made, and three years later, it’s still my travel computer — it’s the one pictured above. It’s still fast enough to do anything I ask of it, including substantial Xcode and Lightroom use on the road. It did develop the image-retention problem common among the early screens, but Apple fixed that last month, out of warranty, for only $300. My only complaint is that the battery doesn’t last as long as the newer models.

But in a brief period of questionable judgment yesterday, I impulse-bought the new MacBook, which I call the MacBook One.1 My theory was that I could use it for roles in which I’ve failed to use iPads because they don’t work for me: writing and email around the house or in bed, and bringing on most trips that wouldn’t involve Xcode. It would be my iPad Pro. I’ve been waffling for years about finding a cheap 11-inch MacBook Air to serve this role, but I didn’t want a non-Retina machine.

I knew the MacBook One was slow, I knew the keyboard was weird, and I knew it only had one port. I also knew that it was really small and light and had a Retina screen, and unlike every other Mac laptop, I could almost double its battery life with a $38 USB battery, which was tempting for my upcoming schedule of many long flights. So I went into it with low expectations and acceptance of its limits.

The MacBook’s keyboard is not good.

Even after getting accustomed to it enough to type at my full speed — or maybe even a bit faster — its limited key-travel depth and keyswitch feel not only make it feel much worse, but also make typing much more error-prone for me. You have to use so little downward force to type quickly and keep from uncomfortably “bottoming out” that I often miss keypresses, not because I didn’t hit the correct key, but because I just didn’t press it hard enough.

The extremely shallow key travel is partly to blame, but so is the keyswitch feel. They’re more like clicky buttons than keyboard keys, feeling almost like the iPhone’s Home button. They don’t engage or actuate — they snap. This makes it harder to modulate downward force while typing on them, especially from your weaker outer fingers.

I can type on the MacBook, but I’d rather not.

What I hadn’t considered was that even though I had common tasks that could fit within the MacBook’s limited specs — email, writing, chat — all of them required a lot of typing. Oops.

The Force Touch trackpad is really cool. It’s a piece of glass that doesn’t move, but responds to pressure and simulates a click feel with haptic feedback. It even simulates two different click “depths”, calling the deeper one Force Click and giving it special functionality in certain apps (separate from a right-click). It’s a remarkable technical achievement.

It is also not good.

The simulated click vibration does feel like a click, but not a good one. It offers three different firmness settings, none of which feel anywhere near as good as Apple’s trackpads with real buttons. It feels like what it is: mushing my finger against a fixed pane of glass that’s emulating the feel of a button and almost getting there, but not getting there.

The keyboard is worse than the trackpad to me, but not by much. Both are major compromises in the name of thinness, and both are significantly worse than their (pretty great) predecessors.

And unfortunately, the Force Touch trackpad has now spread to every Retina MacBook Pro. (At least the keyboard hasn’t.)

This is not a fast machine. I knew that going in, but also knew that it wouldn’t matter for most of my intended light-web usage — hell, I had the original 2008 MacBook Air with the iPod hard drive, and I made that work.

But once you’re accustomed to MacBook Pros and iMacs, the speed difference is noticeable in almost everything, even light tasks like browsing through folders or processing email. And when presented with a more intensive task, like browsing Photos or installing large apps, you really feel it.

If I were only using this computer for writing and light web work as intended, it’s capable enough. But it would be frustrating if I ever needed to do anything else on it. It’s not as slow as the 2008 MacBook Air was, relative to its time, but it certainly evokes that era for me.

For all of these tradeoffs, the MacBook is ridiculously small and light. When comparing it in the store against its next-smallest Retina sibling, the 13-inch Retina MacBook Pro, it’s not even close — there’s a vast gap between them. It even feels like a major improvement over the MacBook Airs, which are already extremely small and light.

I just hate using it.

I hate typing on it, I hate the trackpad, it’s slower than I expected, the screen is noticeably blurry from non-native scaling to get reasonable screen space, and I don’t even find it very comfortable to use in my lap because it’s too small.

I can see why a lot of people love it. Not everyone hates the keyboard and trackpad as much as I do. If I were carrying my laptop for a long time in a shoulder bag every day (which I was when I got the 2008 Air), this would be a welcome weight reduction. If I frequently worked on airline tray tables in economy with the person reclined in front of me, the extremely small size might make the difference between being able to use my laptop or not.

But all of those benefits are also available in the 11-inch MacBook Air. It has a far better keyboard and trackpad, more ports, and faster performance. The only major downsides are the lack of a Retina screen and less screen space.

The 11-inch MacBook Air shows that the MacBook’s compromises have nothing to do with going Retina — the One has roughly the same GPU, less horsepower, less space, less weight, and a smaller battery, yet still drives a Retina screen perfectly well. Apple could have made a Retina MacBook Air instead of (or in addition to) this new MacBook, but chose not to.

Instead, we have major compromises on previous invariants. Until now, since I started buying Macs 11 years ago, Apple had never shipped a laptop with a keyboard or trackpad that was less than great. They recognized that a laptop without a good keyboard wasn’t a good laptop, even if a lot of people would be OK with it and buy it anyway.

This concerns me more than you probably think it should. Not only does it represent compromised standards in areas I believe are important, but it suggests that they don’t have any better ideas to advance the products except just making them thinner, and they’re willing to sacrifice anything to keep that going.

The 15-Inch, Which Is Now A Giant Aircraft Carrier By Comparison

The 15-inch Retina MacBook Pro hasn’t changed much since my impulse buy in 2012. Today, Apple updated them, but it’s a very minor update — the aging Haswell CPUs are unchanged from last year and barely changed since 2013, held back by Intel’s Broadwell delays, and the current base model is only 11% faster than the one I bought in 2012. Even today’s highest-end CPU is only 24% faster than my 2012 base model. There’s still no USB-C, no LCD improvements since 2012, and nearly the same battery life as last year’s model.2 They now have Force Touch trackpads, but I consider that a downgrade.

The base-model 15-inch is usually a fantastic deal, and this generation is no exception — I’d say it’s the best laptop value in the lineup for a power user, only spending extra for more storage if you need it.3

In the last 11 years, when I’ve had smaller laptops, I’ve often run into their limits. But I’ve never regretted buying a 15-inch. It always serves me better, doesn’t leave me wanting more power or screen space, and just feels right.

It’s not sexy, it’s not cool, and it may never be again. But neither will I.

It’s heavier than Apple’s smaller laptops, but it’s not heavy, really. It’s about the same weight as the original white plastic 13-inch MacBook, which we all thought was incredibly light and portable.

I want more battery life, but I can get most of the way there by just getting a new 15-inch: they’re now offered without discrete GPUs (which drain power and kill logic boards for benefits I don’t need), Haswell is more power-efficient than my Ivy Bridge core, and anything I buy today will have a battery that’s three years newer. The CPU will only be 11% faster, but it’s already fast enough for my work, and the new ones have twice as much RAM. This one has lasted three years and still works well enough that I can sell it for a good price or give it to a family member.

Since I don’t like Force Touch trackpads and the new models offer nothing else I need, I just ordered yesterday’s base model for $1850 before it goes out of stock — an even better value than usual. Today’s hardware at yesterday’s prices.

It has a great keyboard, great trackpad, the largest screen available, tons of ports, and tons of horsepower. It can do everything I need a laptop to do, and I’ll enjoy every minute of using it. The only major compromise is the size, but now that I’ve seen the other side, I’m OK with that.