Running the Ghostery browser add-on in my Mac browsers has been illuminating:

But that wasn’t possible on mobile, where it’s most needed… until iOS 9. 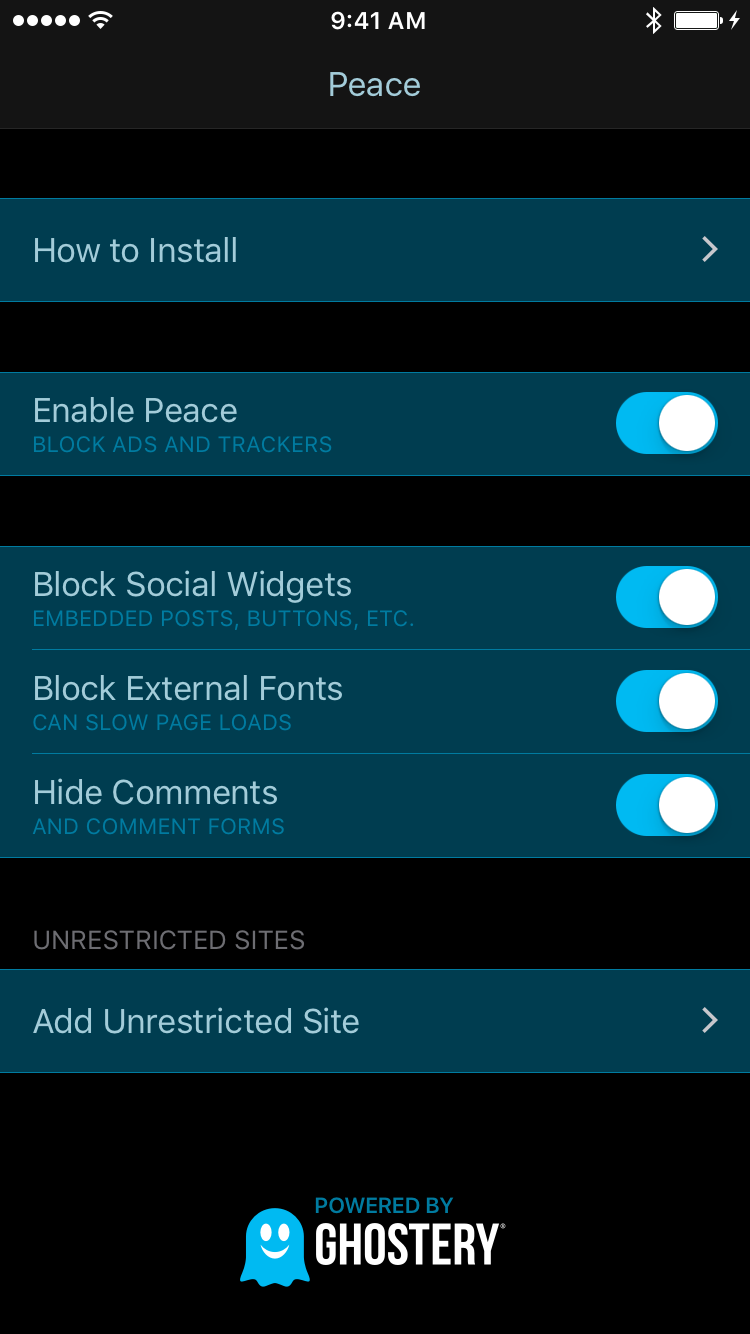 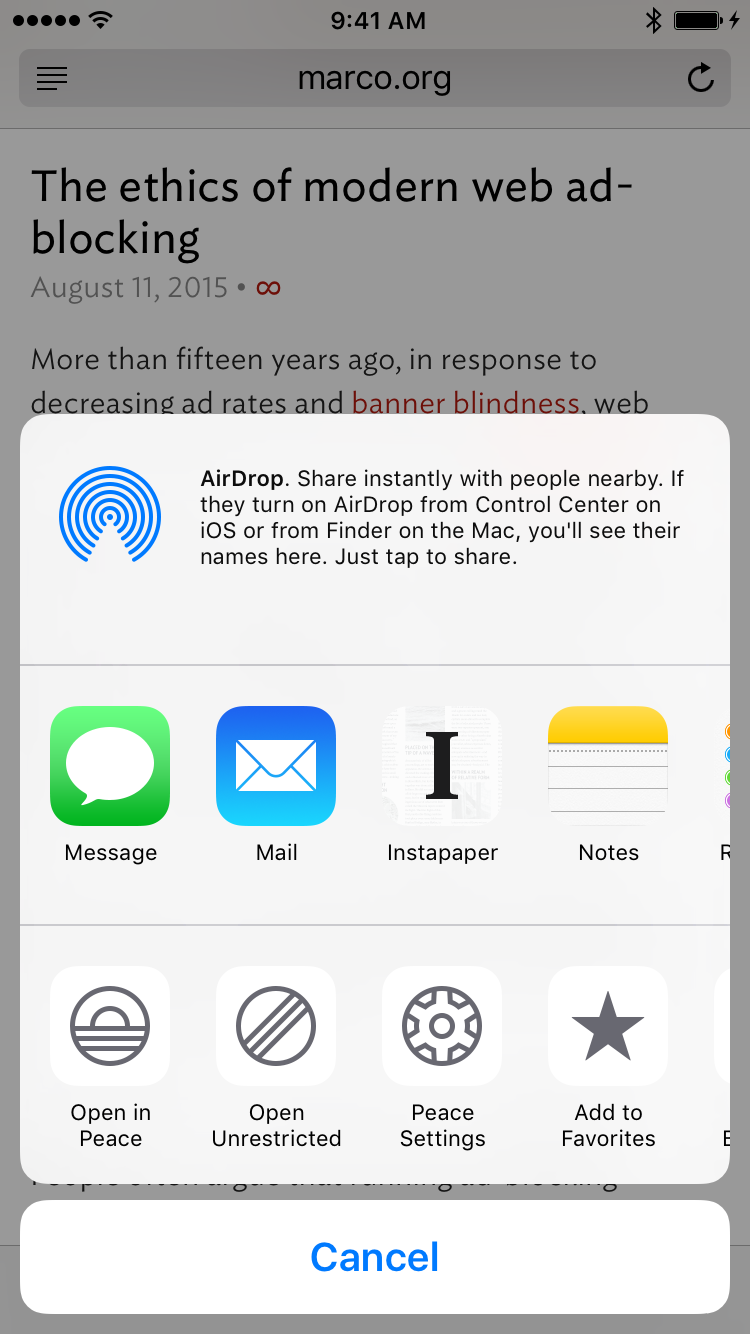 There are a lot of content blockers being released today, but Peace strikes the best balance I’ve seen between effectiveness, compatibility, simplicity, and speed, powered by what I’ve found to be the best database in the business after months of testing. And it’s just $2.99.

As I wrote in The ethics of modern web ad-blocking, web advertising and behavioral tracking are out of control. They’re unacceptably creepy, bloated, annoying, and insecure, and they’re getting worse at an alarming pace.

Ad and tracker abuse is much worse on mobile: ads are much larger and harder to dismiss, trackers are harder to detect, their JavaScript slows down page-loads and burns battery power, and their bloat wastes tons of cellular data. And ads are increasingly used as vectors for malware, exploits, and fraud.

Publishers won’t solve this problem: they cannot consistently enforce standards of decency and security on the ad networks that they embed in their sites. Just as browsers added pop-up blockers to protect us from that abusive annoyance, new browser-level countermeasures are needed to protect us from today’s web abuses.

And we shouldn’t feel guilty about this. The “implied contract” theory that we’ve agreed to view ads in exchange for free content is void because we can’t review the terms first — as soon as we follow a link, our browsers load, execute, transfer, and track everything embedded by the publisher. Our data, battery life, time, and privacy are taken by a blank check with no recourse. It’s like ordering from a restaurant menu with no prices, then being forced to pay whatever the restaurant demands at the end of the meal.1

If publishers want to offer free content funded by advertising, the burden is on them to choose ad content and methods that their readers will tolerate and respond to.2

Why choose Peace over any other iOS 9 content blocker?

Apple’s new WebKit Content Blocker API makes iOS ad blockers so trivial to make that there will likely be hundreds, or more, released over the next few months. Even today, on day one, there’s already tons of competition.

Today, Peace has a number of exclusive features and nice implementation details that I haven’t seen in any other iOS content blocker, but I’m sure they won’t be exclusive for long.

Making the app is easy, but creating and maintaining the database of ad and tracker URLs to block is very, very hard to do well.

Most ad blockers use public “hosts” files, advertising thousands of entries in their blocklists. I tested every hosts database I could find over the last few months, but found a number of downsides:

Since the browser must check every resource against the blocklist as a page loads, and modern pages commonly include tens or hundreds of resources, bigger isn’t better. The bigger the list, the more time and memory necessary to enforce its rules as pages load.

Diminishing returns set in quickly: the ideal list has just enough entries to block most ads and trackers that we’ll encounter on most sites we’ll visit, but not so many that we’re burdening Safari with thousands of entries it will probably never use.

Whenever I’d test another blocklist against Ghostery’s, I kept finding the same thing: Ghostery blocked more trackers and had fewer compatibility problems, with a reasonably sized blocklist of about 2,000 entries.

This isn’t surprising: Ghostery is a well-staffed company with much broader reach and much better tracking data than small groups of volunteers can usually achieve, with a business model that’s ethical, sustainable, and aligned with our interests.3

After being dissatisfied with every other option, only a few weeks ago, I contacted Ghostery to see if I could license their database for Peace. I thought it was a long shot, assuming that they’d either say no, or that we’d take forever to work out a deal and miss the iOS 9 launch.

To my surprise, they loved the idea and we worked out the entire deal in about a week: I’ll make and sell the app and give them a percentage of the revenue. That’s it. The app is completely my code, using a copy of Ghostery’s tracker database hosted on my server that the app periodically checks for updates.

As you can see in Peace’s privacy policy, we not only don’t collect any user data, but we can’t collect anything of much use — iOS content blockers aren’t privy to any of the user’s browsing activity. All we can do is provide a list of conditions to block. That’s it.

With Ghostery’s database, Peace is ridiculously good. This isn’t a time for me to be modest — just go try it and you’ll see for yourself.

You’ll reclaim a good deal of privacy, cellular data, and battery power, and you won’t believe how fast iOS web browsing can be.