TheNextWeb has a good overview of the facts from today’s Amazon event.

This will probably have wide implications, and I’ll definitely have more to say in the future, especially once I’ve actually used these things. (I’ve preordered a Kindle Touch 3G and a Kindle Fire to review here and test with Instapaper.) 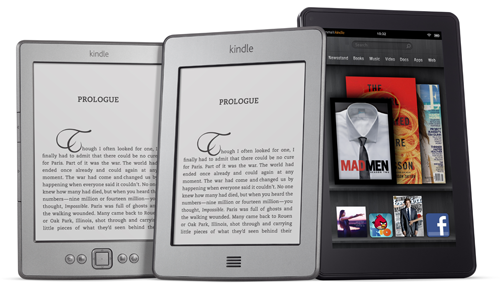 The e-ink Kindle prices are misleading: the quoted prices on e-ink Kindles are all with “Special Offers” (a euphemism for ads, how “special”). Add $30-40 to the price of each e-ink Kindle to get one without ads.

In my Nook Simple Touch review, I speculated (and hoped) that Amazon would drop the big, ugly keyboard from the next Kindle, and I’m very glad that they did. (I also hoped they’d drop the audio components. They did, but only in the low-end button model.)

The cheapest one, $79 with ads or $109 civilized, retains the 5-way controller from the Kindle 3 (which old video-game nerds like me probably know as a “D-pad”) and looks a lot like older Sony Readers. Navigation is going to be just as clunky as previous Kindles, so I don’t think this is worth getting for most people.

The Kindle Touch, $99 with ads or $139 with self-respect, has an infrared touch screen, just like the Nook Simple Touch. I have high hopes for this one: this is probably going to be the e-ink reader worth owning for the next year or two.

There’s a 3G model for $50 more. That’s a relatively big price premium for a feature that most people will never use, but it’s effectively prepaid: like previous 3G Kindles, you’re not charged for data in the U.S. (They usually have different arrangements that I don’t know enough about in other countries.) So if you do a lot of traveling or are often away from Wi-Fi networks, and you’d like to get new Kindle content wherever you are (especially useful for newspapers, magazines, and Instapaper), the 3G model is probably worth getting.

I’ll post a full review of the Kindle Touch when I receive mine.

This is going to be interesting.

The Kindle Fire lines up with most of my speculation (and everyone else’s): it’s a 7” Android tablet, but Android has been buried under Amazon’s completely custom interface, and it runs all of Amazon’s content stores: Kindle books, music, video, and Android apps. The only surprise is the $199 price, which is lower than almost any of us guessed.

The Fire will be the first Android-powered tablet to sell in meaningful volume, but whether it’s a viable platform on which to sell high-quality paid apps remains to be seen. The Amazon Appstore for Android has been hostile to developers so far.

It’s definitely going to compete with the iPad for some customers, but I doubt it’s going to make a significant dent. It’s probably a high-end Kindle, not a low-end iPad. But this will almost certainly hinder the already negligible sales of other Android tablets.

What we’ll see with the iPad depends on why people buy iPads. My theory is that there’s an iPad market, not a “tablet market” — that people want the iPad and specifically seek it out without comparing it to other tablets.

A “tablet market” suggests that people first decide they want a tablet, then they comparison-shop and choose the one that best fits their needs and budget, like buying a dishwasher. I don’t think we’ve seen any plausible evidence that a meaningful number of customers think of tablets generically like that.

But if anything’s going to prove me wrong, it’s the Kindle Fire.

If you’re ordering one of the new Kindles from Amazon’s U.S. store, I’d appreciate if you’d use one of my affiliate links: