Update: A new Honeywell has the same issue.

We’ve had two Nest thermostats for a few weeks now, and we mostly like them. But I’ve run into an issue with our wiring that Nest has all but confirmed, and I’ll need to either stop using the Nests or run new thermostat wiring.

Nest claims to be compatible with single-stage systems with two (heat only) or four (heat and air conditioning) wires:

When a thermostat calls for heating or air conditioning, it bridges the respective R supply wire to the call wire and the equipment turns on. Simple. (Thanks, Transwiki thermostat wiring page.)

This setup doesn’t provide any method for the thermostat to take power for itself from the system when the heat or air conditioning isn’t on: the only way is to draw some current off of the bridged circuits when they’re running, but they might not run often enough to keep a digital thermostat powered. That’s why most digital thermostats need replaceable batteries.

Another standard thermostat wire is often employed to solve this problem:

The Nest uses a built-in, permanent, rechargeable battery that automatically draws current from the system to charge itself. It claims to be compatible with systems that have this wiring arrangement even if they lack the C wire. 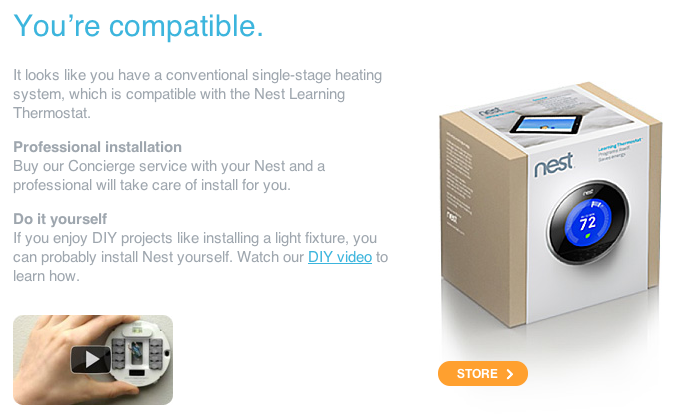 The problem arises when the Nest needs to charge itself and neither the heat nor air conditioning has turned on in a while, like on a mild day. Without a C circuit to take power from, it can only charge itself from running the system.

So it pulses the R-W heat circuit in short bursts to get power.

Maybe some systems are slow to respond to the call for heat, so this doesn’t result in anything noticeable. But my boiler reacts instantly, and it sounds like it’s really not enjoying this technique:

I’m not an expert, but I have to imagine that this is not good for my boiler’s longevity. And the noise it makes is annoying at best.

I emailed Nest support and they essentially confirmed that this is how it behaves, so it doesn’t appear to be a bug in mine. They recommended installing a C wire to solve the problem, which will require an electrician and, therefore, more money. I’m going to look into how much that will cost and decide what to do then.

But Nest shouldn’t claim compatibility with systems without a C wire. Their solution of pulsing the heat circuit clearly doesn’t work on all systems without significant negative side effects.

Update: A new Honeywell has the same issue.