So far, I’m betting on an A5X-powered Retina iPad Mini by this fall. While I’m making semi-crazy predictions about future iOS products so I can look back on this in a year and probably feel like an idiot for being so wrong, here’s one more.

The recently rumored, larger-screened “iPhone Math”, or more likely “iPhone Plus”, is plausible as an additional model (not a replacement) alongside the 4” iPhone. And there’s a good chance that it would have a 4.94”, 16:9 screen.

The theory is easy to understand: perform John Gruber’s Mini-predicting math backwards. The iPad Mini uses iPhone 3GS-density screens at iPad resolution. What if an iPhone Plus used Retina iPad screens with iPhone 5 resolution, keeping the rest of the design sized like an iPhone 5? 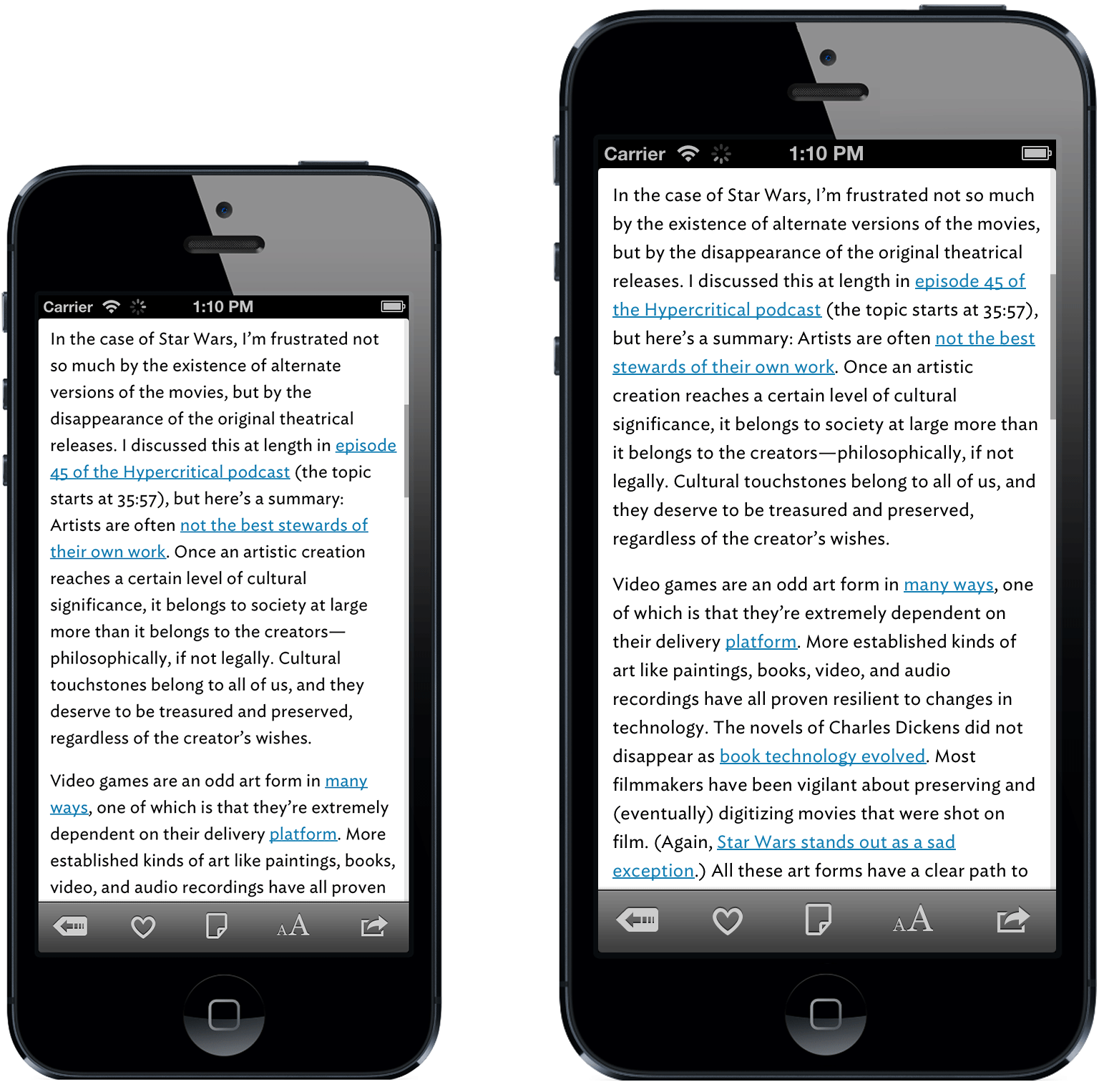 (Please pardon the flaws caused by my amateur Photoshop skills.)

It looks a bit crazy, but it’s not that implausible. To see it at scale:

By keeping the pixel dimensions the same as the iPhone 5, no app changes would be necessary. While the larger screen would hinder one-handed use, two-handed use would actually be easier because the touch targets would all be larger, and UIKit’s standard metrics and controls still work well at that physical size.

Here’s how it would look in Apple’s lineup:

Why would Apple release this?

First and foremost, there’s significant demand for larger-screened phones. As much as we make fun of the Galaxy Note, it sells surprisingly well, especially outside of the United States. Other large Android phones sell very well almost everywhere.

The iPhone has lost a significant number of sales by buyers either wanting a larger screen or being drawn to how much better the large screens look in stores. Here’s how this theoretical iPhone Plus looks next to the large-screened competition:

Now, imagine that lineup without the iPhone Plus mockup. That’s how the shelf looks today when a buyer goes into a phone store. See the problem?

An iPhone Plus almost as big as a Galaxy Note isn’t ideal for many people, but it doesn’t need to be quite that large to accommodate a 4.94” screen. It’s clear that other manufacturers have found designs and techniques to make larger-screened phones require smaller bezels. Apple could achieve similar results and shrink the “forehead” and “chin” even further, limited primarily by the size of the Home button and the desire to keep the forehead and chin equal height.

A 4.94”-screened iPhone doesn’t sound too ridiculous these days.

Buyers wanting a small phone or better one-handed operation could still buy a 4” iPhone, and people who want a large screen would finally have an iPhone as an option.