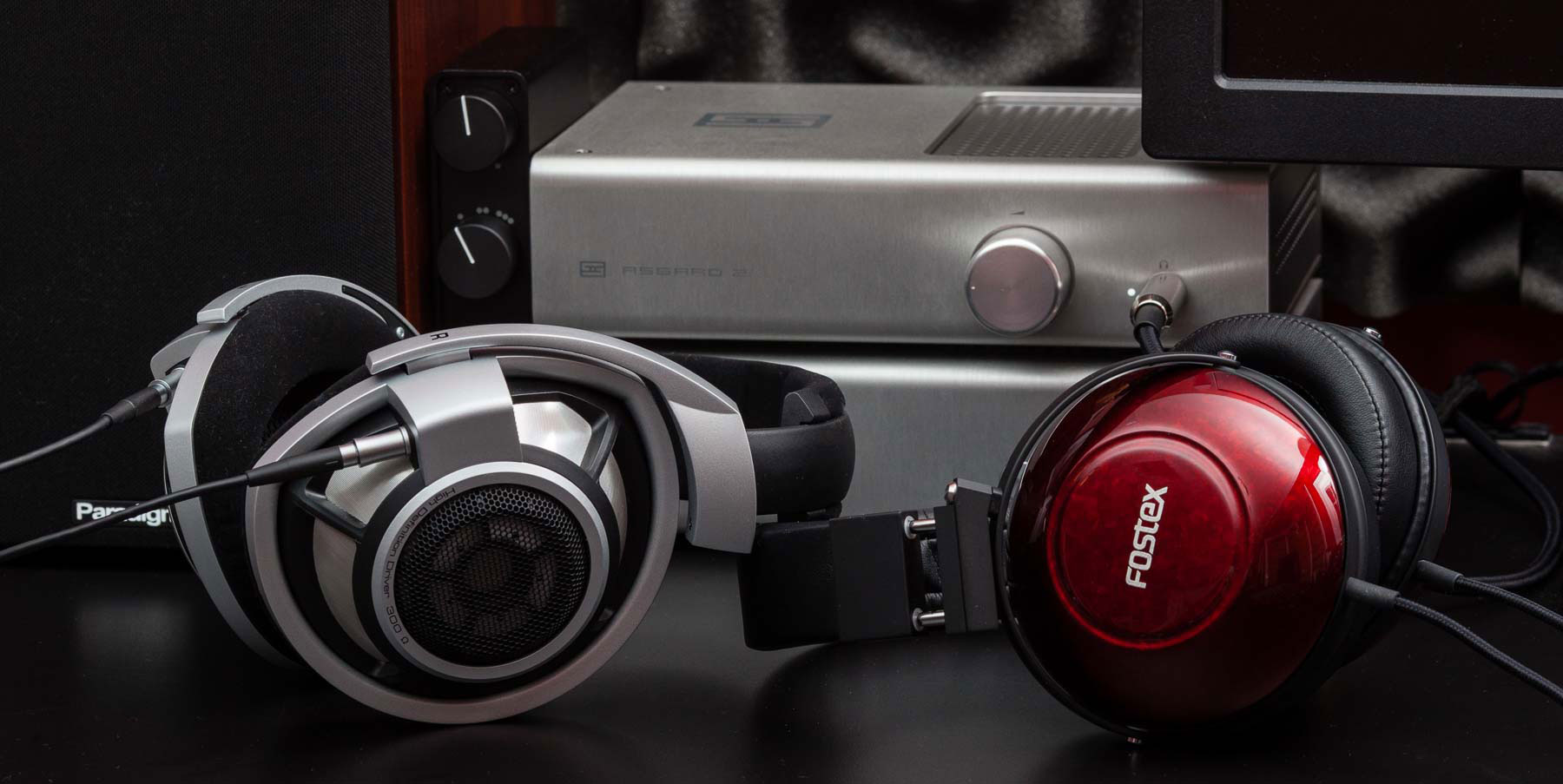 In Headphones and Coffee, I had to disclaim that I hadn’t tried most of the best headphones in the world — I was sticking with what normal people would consider a “high-end” range of $500–700, but to a headphone audiophile, that’s midrange. I had never heard what many consider the quintessential high-end headphone: the famous Sennheiser HD 800.

As expected, I heard about it. I also had a great Amazon-referral month, so I decided to “reinvest” (that’s what I tell myself to justify high-end headphones, at least) and give them a real shot. I also hated my closed headphones,1 so I got what many consider the best closed headphones currently for sale, the Fostex TH900. Both retail for $1500, and both are frequently on sale for a few hundred bucks less. I planned to try both for a few months, then sell one or both.

I still can’t detect a sound-quality difference between amps and DACs2 unless there’s an electrical problem, like an amp with insufficient power for the headphones or a DAC with audible noise on the outputs. But I wanted to give these headphones a fair shot, and the HD 800 needed more power than my existing amp could deliver.

Choosing an audiophile amp and DAC are difficult because audiophiles will tell you a great deal of unscientific wine-tasting descriptions of how each component sounds, then recommend whatever they bought. As soon as you pick one, the same people blame it for any flaw or disappointment you find. “Oh, you aren’t impressed by these expensive headphones? Burn them in for 600 more hours, upgrade that inferior stock cable, and replace that harsh DAC.” It’s exhausting.

I like what Schiit stands for. Their founders are extremely good electrical engineers, and their products hit all of the checkboxes — high power, low distortion, fancy inputs and outputs, both tube and solid-state models, etc. — but they’re very affordable (relative to similar products), and their no-bullshit attitude is refreshing in an industry that’s otherwise so full of it. (Really. Read some of their product FAQs, or co-founder Jason Stoddard’s ongoing story of their early days.)

I chose well enough to give these headphones a fair shot by most reasonable estimates:

So if you need an amp, the Asgard 2 is great. If you need a DAC, the Bifrost is great, but I still question whether you need one — given any budget constraints, a great DAC’s price is much better allocated to better headphones first.

I previously chose the Beyerdynamic T90 ($650) because of its incredible detail, quality, and comfort, with the caveat that its treble can be harsh with some music, especially studio rock and pop albums sloppily mastered in the mid-2000s to sound better on awful earbuds. But that was the only substantial flaw, and I was blown away by everything else about it, especially that level of detail.

When the Sennheiser HD 800 and Fostex TH900 arrived, I put the T90 in the closet for a few months, leaving me to get to know the new arrivals full-time: the HD 800 when I could use an open pair, and the TH900 when I couldn’t.

When I first tried the venerable Sennheiser HD 800, which costs at least twice as much, I was disappointed — it wasn’t very different from the T90. Over the last few months, I’ve been able to put my finger on why it’s so well-regarded: It has no obvious flaws.

Well, almost. The bass is pretty light, even for audiophile headphones. But this isn’t a problem with any music the way the T90’s treble can be too hot with some. With the HD 800, I never notice any flaws, when listening to anything, that I can point to as a headphone shortcoming. It’s a technical marvel.

But this comes at a cost that took me a few more months to realize: the HD 800 has no personality whatsoever.

The best part of owning great headphones is the occasional “Holy shit!” factor: those moments where you’re just blown away by how great the music sounds. The HD 800 never sounds exciting or fun, and I’ve never had a “Holy shit!” moment from it. You don’t rock out with the HD 800 — it’s very pleasant, but it won’t make you dance in your chair.

It’s technically brilliant, but in reality, it just needs a bit more… something. It’s like a perfectly cooked filet mignon with no salt.

The Fostex TH900 is another story. It’s by far the best closed headphone I’ve ever heard, but that’s partly because it’s not very closed. Its isolation is roughly in the middle between open headphones and almost any other closed pair. But my wife is very forgiving of the sound leakage.

The TH900 has the same incredible level of detail as the HD 800 and T90, but with ample personality. If the HD 800 is like a perfectly flat equalizer, the TH900 is slightly and pleasantly V-shaped: the midrange is recessed just a tad, the treble is boosted slightly, and the bass is strong (though not overpowering like Beats). Unlike the T90, the extra treble never sounds harsh — it just boosts the detail slightly, like a dash of salt.

It’s not neutral-sounding, and the HD 800 is definitely the technically superior headphone. But over the months that I’ve owned both, my HD 800 usage is decreasing, and I’m finding myself going to the TH900 more. The extra hint of treble — and more-than-a-hint of bass — are much better for almost everything I listen to.

The TH900 is also a bit more comfortable, and looks a hell of a lot better — the HD 800 looks like it was designed by space aliens in 1993. And the TH900 is much easier to drive: my Mac Pro’s headphone port can power it amply with a size adapter, though I’ve been using the amp anyway. (Both are far too large, unwieldy, and fancy for portable use.)

Back when such things mattered, in a review I read comparing the first Playstation to the Sega Saturn, the author wrote something that I’m almost positive I’m remembering correctly: “If you only get one, get the Playstation. But if you have both, you’ll play the Saturn most.”

I was frustrated at the time, as a Sega fan: why not pick the Saturn, then? But the author was clear that the Playstation was the “better” system, whatever that meant. I didn’t understand it for years, but I finally get it now.

If you want the best headphones, I must recommend the HD 800.4

If you’re willing to drop $1500 on a pair of headphones, it’s hard for me to advise you to buy any other pair. If you don’t get the HD 800, and you’re anything like me, you’ll always wonder what you’re missing.

If you never want to doubt your choice and feel like you’re missing out on something better — well, that’s an unrealistic expectation. If you’re considering $1500 headphones, you’ll never stop wondering if something else could sound even better. But if you at least want to minimize those times, get the HD 800.

The HD 800 is the better headphone. But the Fostex is my favorite.

And I finally see the difference. If I can only have one, I’ll take the Fostex.

After writing most of this, I took the $650 T90 out of the closet for the first time in months and compared it against these $1500 flagships.

It performs admirably: it has all of the personality and detail of the TH900 in a smaller, lighter, cheaper, open headphone, and I think I actually prefer it to the HD 800 despite its hot-treble flaw. Sometimes higher-end is “better”, but not preferable.

The TH900 manages the same detail and personality without the harshness. It really is better. It’s not almost-3-times-the-price better, but it’s still my favorite.

By opting “only” for the T90, you’re really not missing much that the highest-end headphone world has to offer. As with most pursuits, diminishing returns set in rapidly. The T90 delivers far more of the top-of-the-line qualities than its price suggests.

I’m searching for a properly powered HiFiMAN HE-6 to audition, hopefully with the upcoming Schiit Ragnarok amp. I wish there was a better way to try these things out other than just buying them and selling them later, but there mostly isn’t. (At least resale value tends to hold well.) And I still need to tell you my SR-009 story, but that’s for another day.