Amazon.com today announced that Kindle devices remain the hottest products this holiday season – for the third week in a row, customers are purchasing well over 1 million Kindle devices per week, and Kindle Fire remains the #1 bestselling, most gifted, and most wished for product across the millions of items available on Amazon.com since its introduction 11 weeks ago.

I have my own window into a tiny slice of Kindle sales, since Instapaper’s site has some moderately used Kindle-buying affiliate links, and my Marco.org reviews of e-ink Kindles (which also contain affiliate links) get a lot of Google search traffic and seem to influence some people’s decisions. And my little window definitely doesn’t represent Amazon’s total sales: 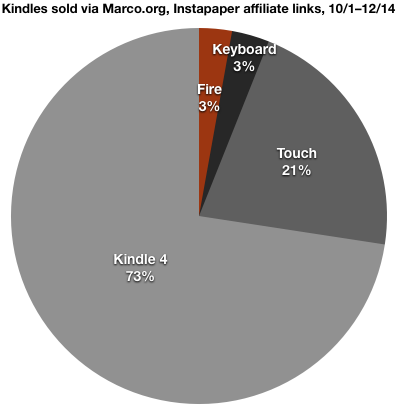 Obviously, my numbers don’t line up with Amazon’s, since they claim that the Kindle Fire is the top seller. But I panned the Fire, was lukewarm on the Touch, and recommended the Kindle 4. And on Instapaper’s Kindle page, I labeled the Kindle 4 as the “recommended model”. So my proportions, especially how poorly the Fire is doing, only indicate that people using these affiliate links are listening to my recommendations, not that this is a remotely accurate representation of all Kindle buyers.

But I’m curious if the Amazon’s claim that the Fire is the top seller depends on any non-obvious technicalities, such as the distinction between ad-subsidized and full-price models within each family, or the distinction between 3G models. Every combination of ads, no ads, 3G, and no 3G shows up separately in the affiliate reports, and I have to imagine that they’re separate throughout all of Amazon’s internal stats.

I hope, for the sake of honesty, that Amazon’s claim about the Fire’s dominance is based on combined model-family numbers: that is, I expect from their press release, assuming the basic Kindle 4 with ads is the second-best-selling model, that the Fire is beating the combined Kindle 4 family (with and without ads), not just the one with ads.