We’ve lost something big. We’re all complicit, myself very much included.

We’ve all been pouring a lot more of our writing and attention into Twitter and Facebook than the rest of the web, and the diversity and decentralization of the web has suffered greatly. Far too much power now rests in far too few hands, and we’re starting to suffer tremendous consequences. (Bigly. A disaster.)1

Apathy and inaction lead to further entrenchment and concentration of power. It’s only going to get worse unless we take action.

Manton Reece is giving it the best try I’ve seen. We still have a chance to take back the web. Please help however you can.

Hiya creepily requires access to all of my contacts, which I think they transmit to their servers for vaguely specified reasons.

Truecaller creepily requires my name, phone number, and email address to add to their directory, which I think might allow people to find my phone number under vaguely specified conditions.

Nomorobo isn’t creepy about anything, but costs $2/month with an in-app-purchase subscription.

I had Hiya installed for weeks and it never identified a single spam call, during which time I got about ten. I followed all of their voodoo troubleshooting steps, but it just never worked, so I deleted it. (Too bad I can’t un-send them my contacts. Thanks a lot.)

I had Truecaller installed for a few days, and it correctly identified two spam calls with no drama or voodoo required. It just works.

When I learned about Nomorobo from readers and saw how creepy it wasn’t, I deleted Truecaller immediately and subscribed to Nomorobo, and it works great.

A few days ago, after a 100% success rate for a couple of weeks — every spam call (and zero non-spam calls) identified before I answer — I enabled the option to send spam calls directly to voicemail.

Now, from my point of view, I just don’t get spam calls anymore.

It was a cold Tuesday afternoon in New York. My hair was still brown. We were supposed to be working, but even David had to suspend his usual workaholism for a few minutes in awe of what we were seeing.

Everything about the iPhone seemed impossible to the technology world of early 2007.

“You can’t make a good phone without buttons.”
“You can’t fit a desktop-class OS on a phone.”
“There’s no way that’s a full-blown web browser.”
“That has to cost a thousand dollars.”

Yet over the course of an hour, Steve destroyed every rule we thought we knew.

Not only was it truly mind-blowing at the time, but in retrospect, so much of modern computing was invented for the first iPhone and revealed to the world in that hour. Just watch the software demos: most modern UI mechanics and behaviors, large and small, began that day.

When it shipped six months later, it was possibly the best 1.0 in tech history, followed by a decade of relentless hardware and software improvements with the highest success rate and fastest advancement of any product line I’ve ever seen.

I’ve seen a lot of major product launches and technology changes in my life and career so far, but nothing else I’ve seen has ever come close to the surprise, magic, and magnitude of the first iPhone, and I don’t expect it to be surpassed in my lifetime.

We appreciate the opportunity to work with Consumer Reports over the holidays to understand their battery test results. We learned that when testing battery life on Mac notebooks, Consumer Reports uses a hidden Safari setting for developing web sites which turns off the browser cache. This is not a setting used by customers and does not reflect real-world usage. Their use of this developer setting also triggered an obscure and intermittent bug reloading icons which created inconsistent results in their lab. After we asked Consumer Reports to run the same test using normal user settings, they told us their MacBook Pro systems consistently delivered the expected battery life. We have also fixed the bug uncovered in this test. This is the best pro notebook we’ve ever made, we respect Consumer Reports and we’re glad they decided to revisit their findings on the MacBook Pro.

Apple’s tone and framing here, and in most recent PR statements where they’re on the defensive, rubs me the wrong way.

Consumer Reports has a spotty history with calling Apple out on product flaws. They’re usually written overly sensationally, and they often overstate the importance of minor issues.

But almost every time, the problem they’re reporting is real — especially in retrospect, after everyone’s defensiveness has passed and we’ve lived with the products for a while. It’s just debatable how big of a deal it is in practice.

The iPhone 4 antenna design really was flawed. The iPad 3 really did get uncomfortably warm. And the 2016 MacBook Pro really did have poor, inconsistent battery life in their test.

Apple’s framing here is almost Trumpian, evading responsibility for the real problem — Apple’s bug — by attempting to insult the test (“does not reflect real-world usage”), discredit and imply malice by Consumer Reports (“a hidden setting”), and disregard the bug as irrelevant (“obscure and intermittent bug”).

It reframes the story to be about Consumer Reports’ own failings and Apple helping them see the right way forward.

But disabling the browser cache during a battery test to make results more consistent is reasonable, Apple’s browser offers that feature, and it’s neither very well hidden nor unused by any customers.1

Nothing about a battery-life test truly reflects “real-world usage.” Battery tests are approximations, designed to mimic the most common tasks but in an artificial, automated, repetitive way for hours on end to get reproducible results.

Real-world usage is so varied, with such wildly different software and usage patterns, that nobody’s battery test is relevant to much of anything except relative comparisons of its own results. A test that lasts 5 hours on a 13-inch and 6 hours on a 15-inch tells you that the 15-inch probably has better battery life than the 13-inch, but that’s about it — it certainly doesn’t mean that your 15-inch will get 6 hours the way you use it.

Reloading web pages without a browser cache is no more or less valid than whatever Apple uses to tell me that my laptop will get 10 hours of battery life when my actual workload usually gets about half of that.

The real story here is that Consumer Reports did get very poor and inconsistent results from their battery test, which was a reasonable and valid test, due to a real bug in Apple’s web browser.

With the bug now fixed (in beta, at least), the MacBook Pros deserve a retest, and Consumer Reports is conducting one.

But their previous results were real, and Apple’s bug was to blame.

Two of the best pieces I’ve read about Apple recently:

They may seem at odds, but I agree with a lot from both, and every Apple enthusiast and commentator would be well-served by reading and considering both.

Apple can — and, I believe, does — have both a well-performing CEO and significant problems in its products that have me both worried and saddened as an Apple customer and enthusiast.

The quarterly results are in and Apple’s doing fine overall, but the iPad really isn’t, with another year-over-year decrease in sales.

Apple and commentators can keep saying the iPad is “the future of computing,” and it might still be. But we’re starting its seventh year in a few months, and sales peaked three years ago.

What if the iPad isn’t the future of computing?

What if, like so much in technology, it’s mostly just additive, rather than largely replacing PCs and Macs, and furthermore had a cooling-fad effect as initial enthusiasm wore off and customers came to this conclusion?

The moving-average unit sales graph would look something like this, right? 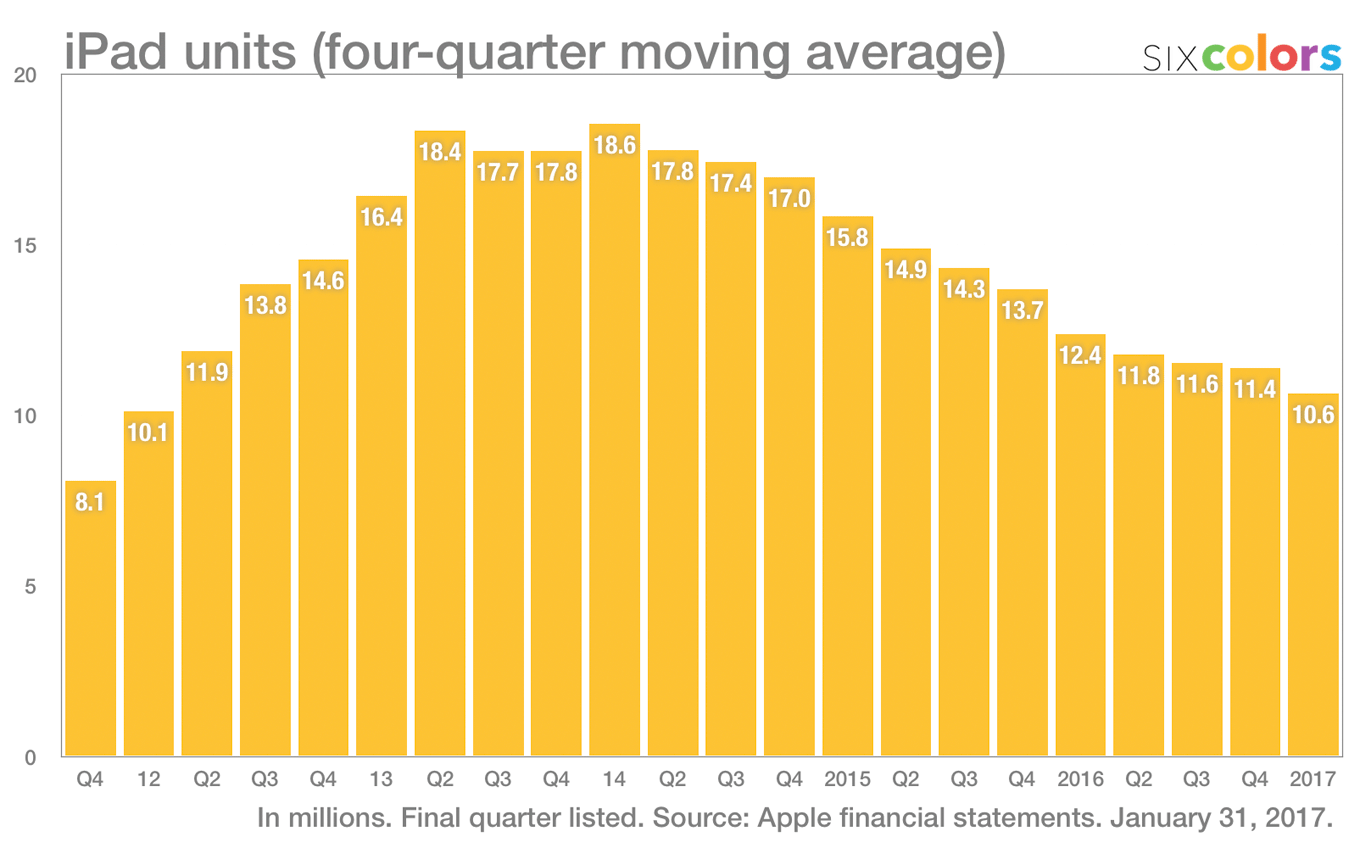 And Mac sales might appear mostly unaffected, or possibly even increasing as iPad sales cooled off, right? 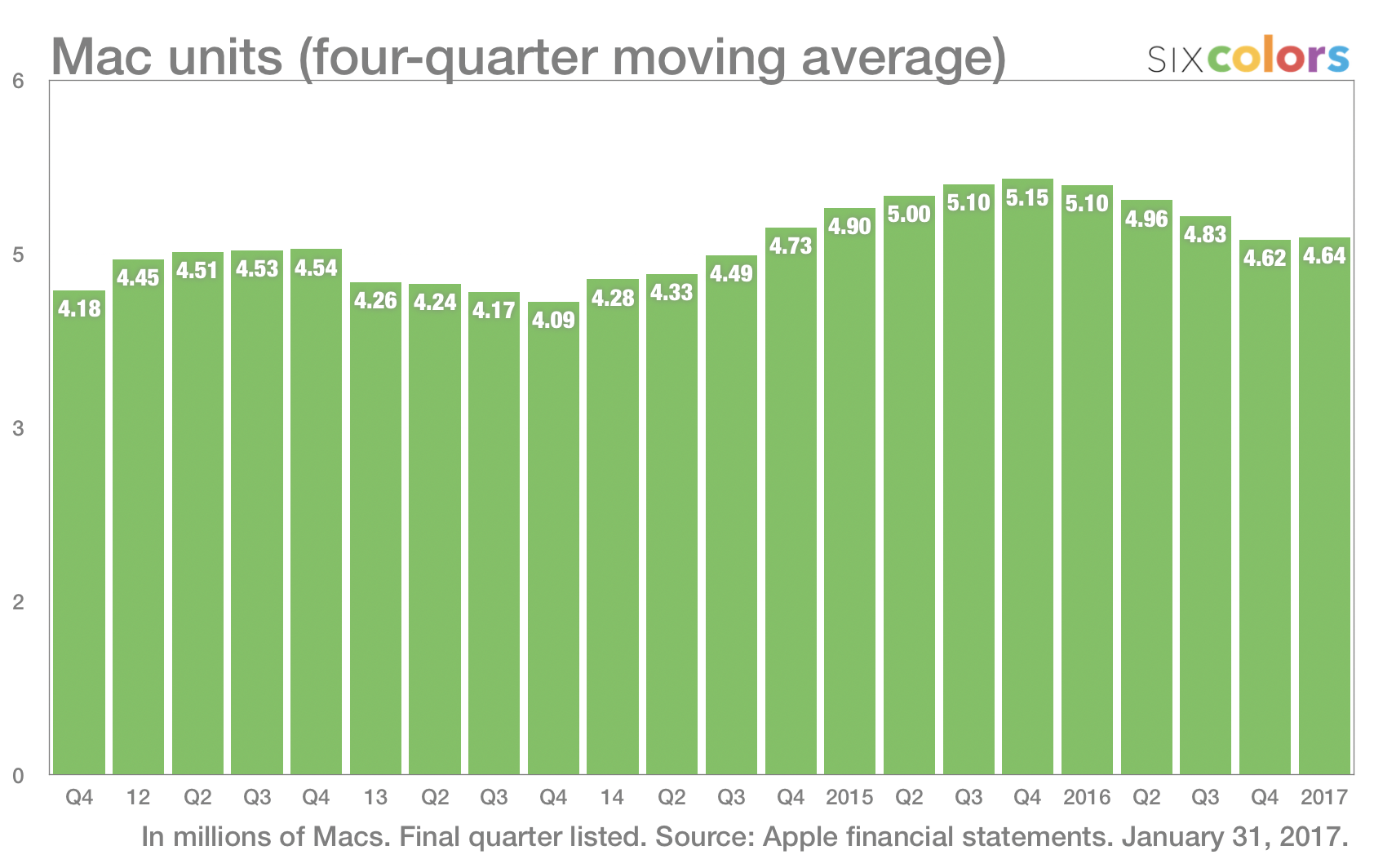 Is Apple prepared for that possibility?