My four favorite podcasters have paired up and made two new Relay shows. This should be a great summer.

I did slightly better than random selection:

Do you spend a lot of time listening to high-quality audio files? Adding specialized equipment to your system can boost the audio quality, but if there are weak links in the chain (say, if you’ve got a digital-to-analog converter and cheap earbuds), you won’t hear as much. Bonus hint: Scroll back up and listen to the uncompressed WAV files again – even self-proclaimed audiophiles say that it takes time for your ears to adjust to the differences in files.

This is what’s so frustrating about audiophiles: they convince themselves, and others, that there’s always more sound quality to be had (and noticed) with an endless money pit of obscure components and upgrades.

But I was already listening with plenty of “specialized equipment”, and even on the ones I got right, I couldn’t really identify what about it sounded better, and any differences were so hard to detect that I wasn’t very confident in any of my choices. I was really straining to hear any difference at all, and I’m not sure I really did.

NPR’s “hint” to then listen again to the now-labeled uncompressed files, since “it takes time for your ears to adjust”, is, of course, bullshit. If they tell you one is better, you’ll subconsciously believe it’s better. This is why blind tests exist.

I stand by my prior assertion that speakers and headphones matter a lot; amps matter a little; and cables, DACs, higher-than-256k bitrates, and higher-than-44/16 sample rates matter so little that almost nobody can blindly detect differences between them. Allocate your budget accordingly.1

The most noticeable quality improvements, by far, come from better-recorded music and better speakers or headphones.

App Camp For Girls is on a mission: we encourage girls to pursue app development as a career by teaching them how to make iPhone apps in a fun, creative summer camp program under the mentorship of women developers. We are shifting the gender balance in our industry. App Camp 3.0 is the next stage in bringing the program to more girls in more locations!

Review by Federico Viticci and a great interview with lead developer Brian Donohue.

I can’t believe how much better Instapaper has gotten since Betaworks took over. They’re doing a hell of a job.

Marco Arment wrote last week about a partial list of questions about the Native Apple Watch SDK and I thought I’d do the same and add mine below:

Even cooler: David made a timelapse video of building the entire app.

The best battery life in the 15-inch Retina MacBook Pro line is the base model (without the high-powered GPU), but Apple’s stated 8–9 hours of battery life is only achievable with very light use — if you’re using tools like Xcode, Logic, or Lightroom, you’re lucky to get more than 4 hours.

I used to eke more battery life out of my 2008 MacBook Air by underclocking and undervolting its CPU to a lower speed with CoolBook, but that’s no longer possible on modern Macs.

Modern Intel CPUs use Turbo Boost to dynamically increase CPU speed, depending on workload, up to their thermal limits. The advertised clock speed — 2.2 GHz for the base-model 15-inch — is only the guaranteed minimum.

Turbo Boost Switcher can temporarily disable Turbo Boost, and I was curious to see if disabling it would meaningfully affect battery life.

I devised a simple battery-testing script to simulate light and moderately heavy loads on my brand new, mid-2014-generation, base-model 15-inch Retina MacBook Pro: it loads some popular websites in Safari over Wi-Fi, spending some time scrolling down each one, while playing music in iTunes, then appends the time and battery status to a file in Dropbox, which promptly gets synced. This cycle repeats indefinitely. For the moderately heavy load, the cycle also includes a clean and full compile of Overcast’s iOS app using xcodebuild every few minutes.

I ran this test at 50% brightness (with auto-adjustment disabled), no keyboard illumination, and sound muted until the battery ran out and it shut down. Before running the test, the battery’s cycle count was just 2.

When plugged in and fully charged, I also ran the Geekbench 32-bit single- and multi-core benchmarks, and observed the power range drawn from the wall with a Kill A Watt.

My “Heavy” numbers with Turbo Boost line up well with the very similar 2013 model in AnandTech’s “Heavy” battery test, which gives me confidence in my test. While AnandTech’s “Light” test appears lighter than mine, neither of us could reach Apple’s “8 hour” claim for this model, which is disappointing.

This won’t be worth doing all the time, but it’s nice to have the option.

And I’d still like to see higher battery capacity in normal operation. This is far from a solved problem, and far from any reasonable definition of “all-day” battery life. I hope Apple agrees.

In How I Killed App Sales By Going Freemium, Shuveb Hussain recounts switching his send-to-Kindle app from $1.99 up front to a free-with-in-app-purchase model:

This is what I came up with: A free app that allowed 10 free articles initially, enough for users to get a taste of the service. After these “article credits” ran out, users would still be able to send one article every day for free. To overcome the one article per day restriction and send articles anytime, users could buy “article credits” via in-app purchases and send articles anytime.

Actually, one article per day was enough for most users. […]

In the past 20 days, Comfy Read 2 has seen just 5 in-app purchases.

Freemium is hard. Its effectiveness depends on where you can put that purchase barrier in your app. Many app types simply don’t have a good place for it.

In this case, Shuveb faces the fatal combination of two major problems:

These seem like opposites: the free tier is both good enough and not good enough. What makes freemium so tricky is that these can both be true simultaneously, and for many app types, this can’t be resolved. That’s why it’s so hard for many apps to succeed with a freemium model.

I spent months debating which features should be behind Overcast’s in-app purchase. If I limited the number of subscribed podcasts for free users, I’d be discouraging people from trying new podcasts. If I put Smart Speed, Voice Boost, and my smart playlists completely behind the paywall, most users would never experience my best features and wouldn’t think my app was very good. But if I kept the paywall too easy to avoid, like showing ads with a purchase to remove them, it wouldn’t sell well. (No-ads upgrades never sell well, by the way.) And whatever features I limited would be free in many competing apps, including the one Apple includes on every iPhone for free.

What I came up with — unlimited general usage and most features being free, with limited demo-like access to premium features before purchase — was a tricky balance and a compromise. Freemium always is.

Paid-up-front isn’t always easy and doesn’t always sell well, but it is much simpler.

Our WWDC 2015 special from San Francisco.

John Gruber’s live performance of The Talk Show at WWDC was unusually special this year. 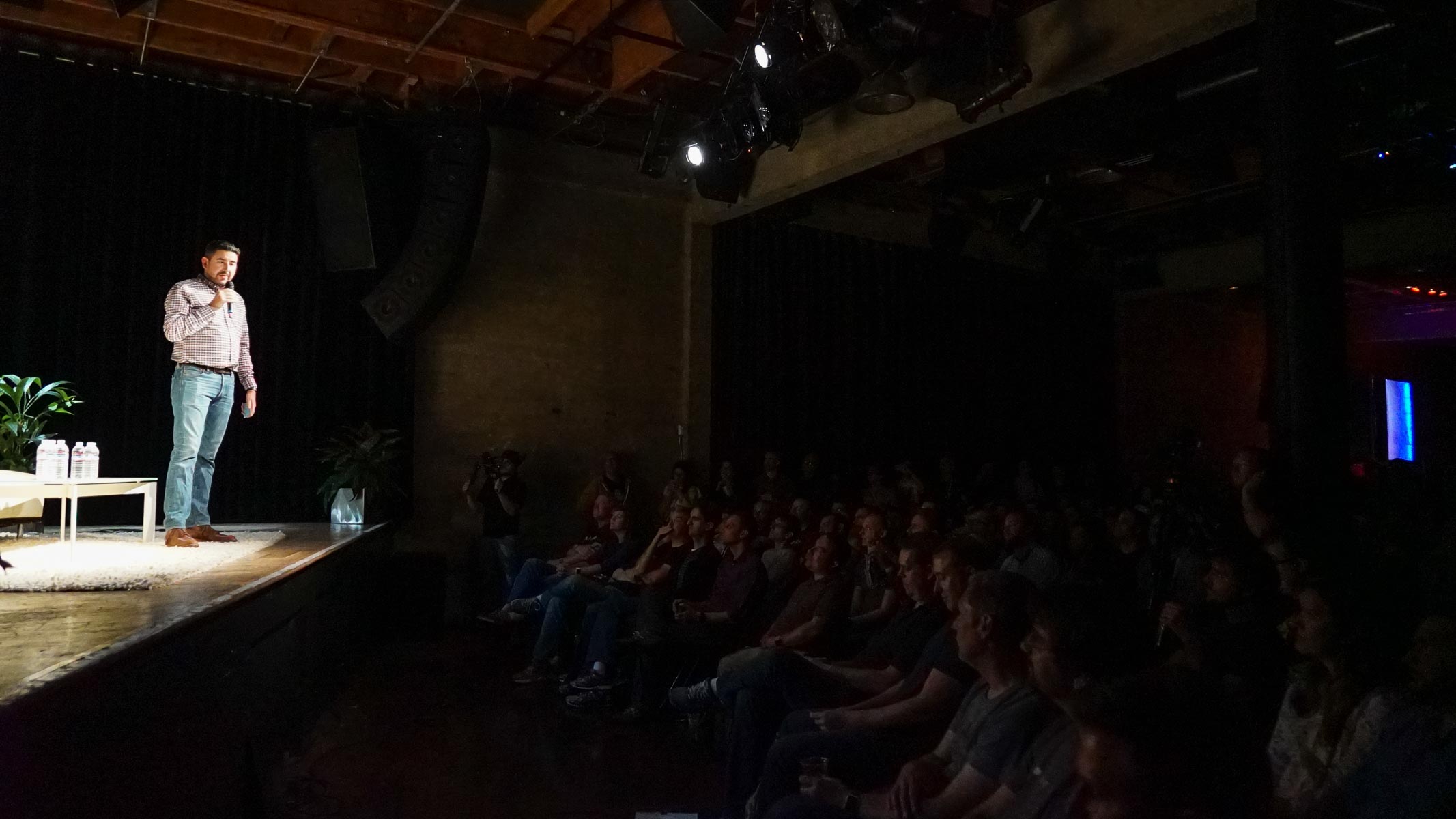 It was announced and sold out without John specifying any guests. He didn’t hype it up or drop any enticing hints. Nobody knew who would be on stage until they walked through the curtains, but we all assumed it would be some of the developers, journalists, and friends who usually join John to give The Talk Show its great personality.

But after a brief introduction from Merlin Mann and Adam Lisagor, John introduced, “and I shit you not,” Apple’s senior vice president of marketing, Phil Schiller.

Being familiar with John’s dry humor, I’m not sure most of the audience believed him. Many cheered. Some hesitated. For a few seconds, nobody walked out, and people started laughing, thinking they got the joke.

And then Phil Schiller really walked on stage. 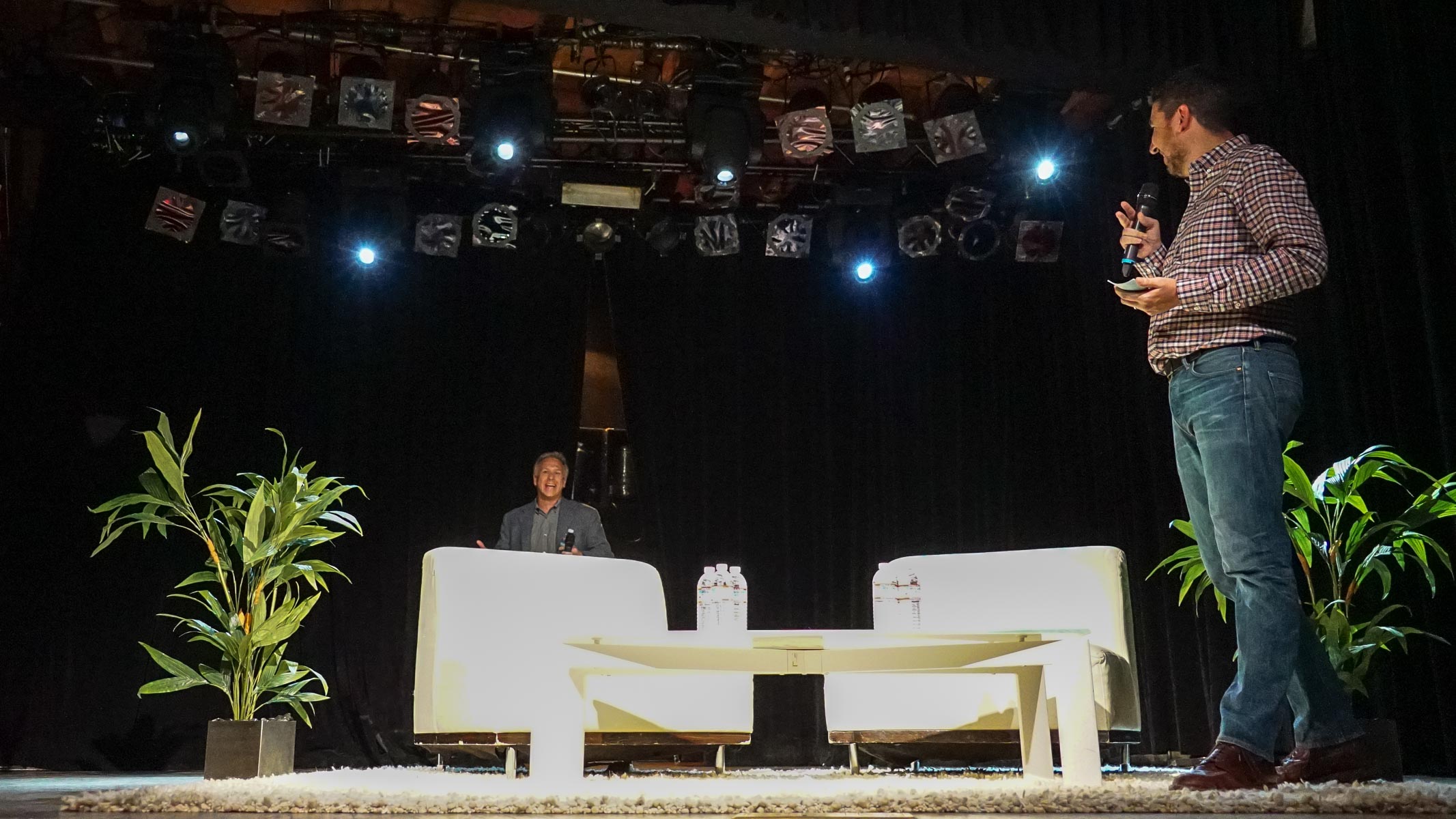 Apple doesn’t do this.

Apple executives rarely speak publicly outside of Apple events, especially for live interviews. One of the highest-ranking executives of the world’s highest-profile company being subjected to questions, unprepared and unedited, in front of a live audience full of recording devices, is rarely worth the PR risk: the potential downside is much larger than the likely upside. Do well, and a bunch of existing fans will like you a bit more; do poorly, and it’s front-page news worldwide.

Both Apple and Phil Schiller himself took a huge risk in doing this. That they agreed at all is a noteworthy gift to this community of long-time enthusiasts, many of whom have felt under-appreciated as the company has grown. 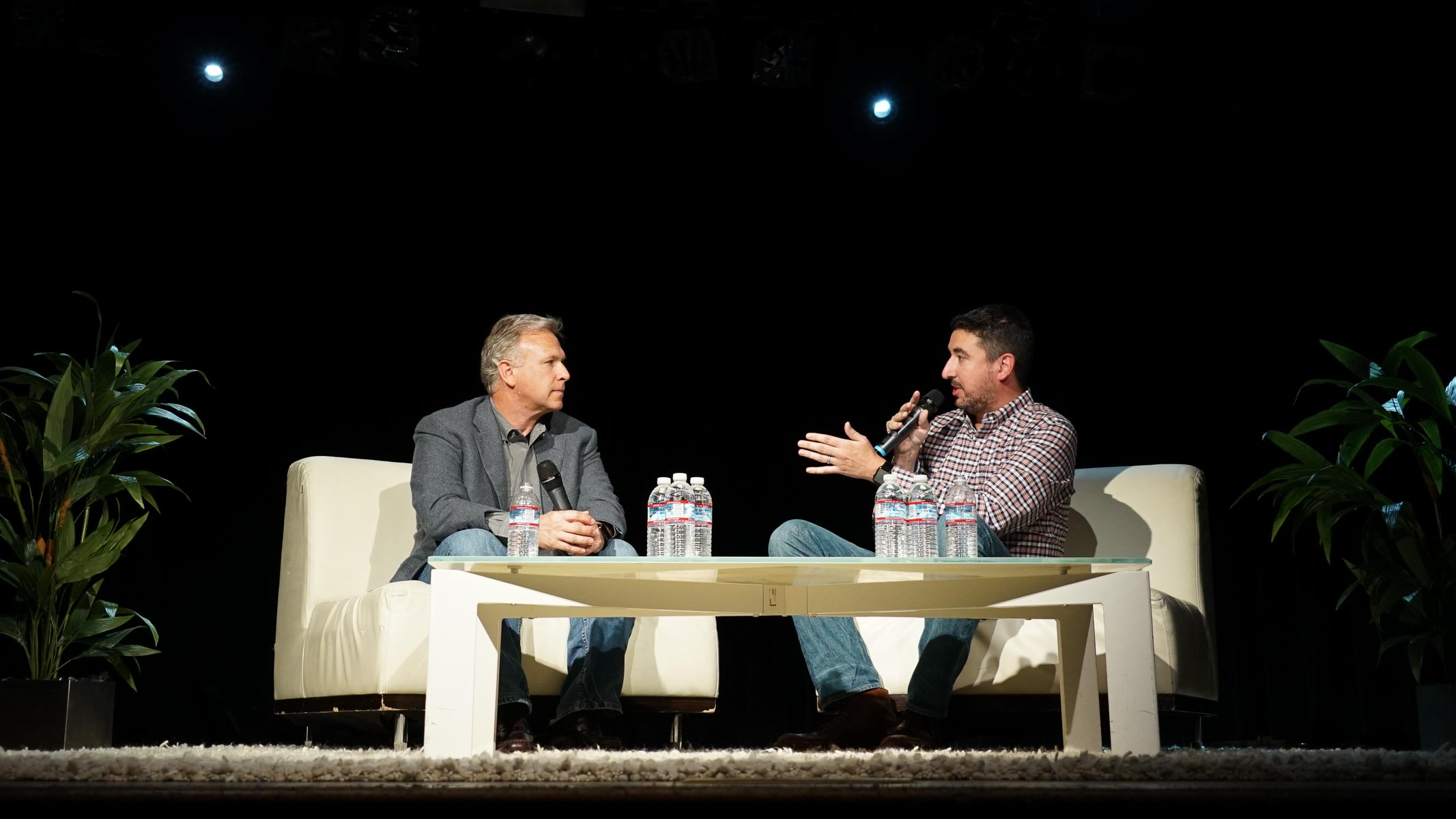 With the wrong interviewer, this could’ve been a recitation of PR-friendly softball questions with perfectly designed, talking-point responses that would’ve gone nowhere and benefitted no one. But Apple PR doesn’t want that any more than the audience does.

Or it could’ve been boring questions about hardware rumors that no Apple executive would ever answer. I’ve never seen another interviewer that didn’t waste time on these dead-ends that, in their wildest dreams, might answer questions relevant only for a few short months or years.

But John Gruber is better than that, and we all know it, including Apple. 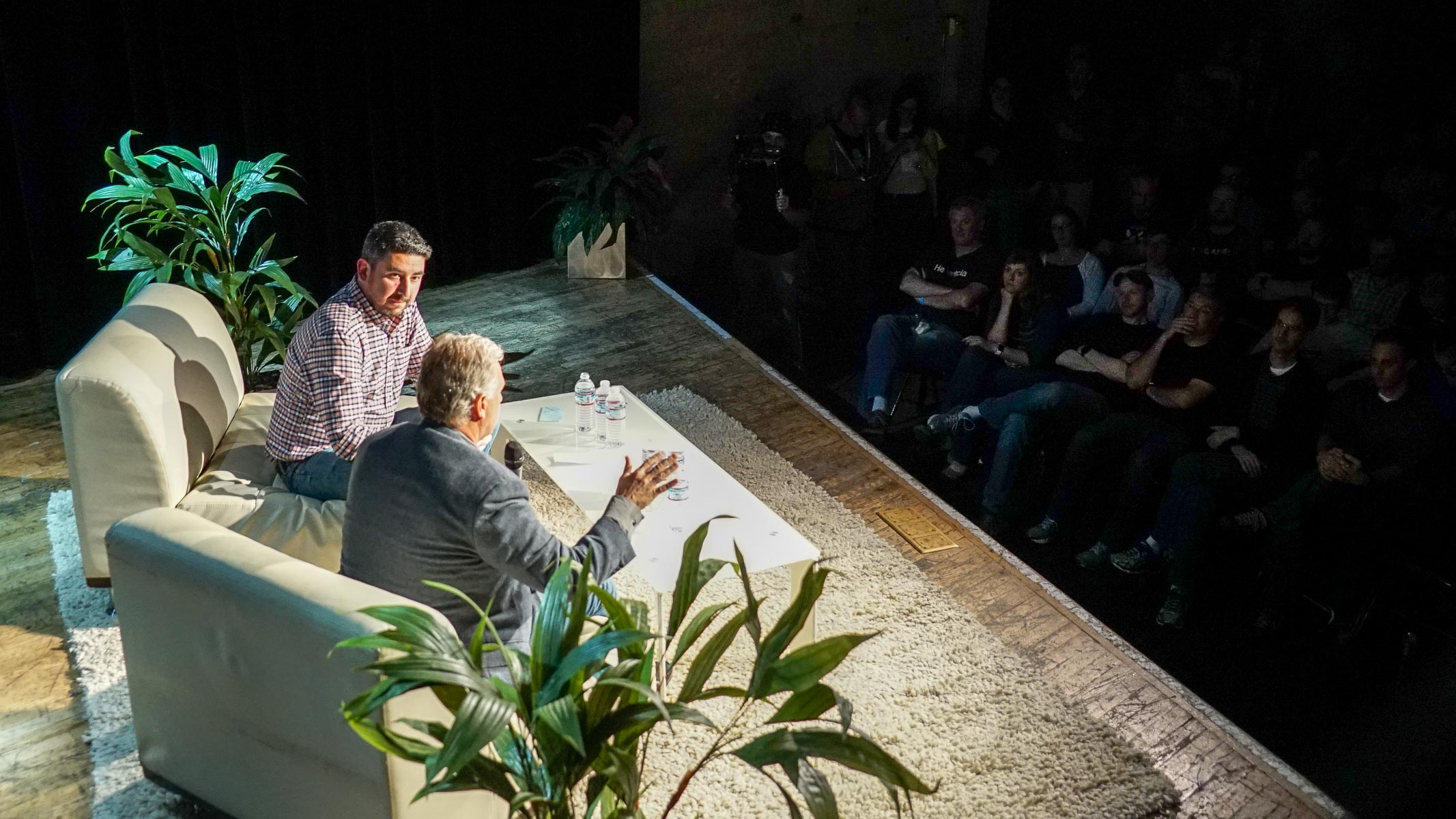 John asked real questions on challenging subjects, including gender diversity, my alleged software-quality decline, discoveryd problems, thinness trade-offs with battery life, the new MacBook, continuing to sell 16 GB iOS devices, and whether the Apple Watch should have shipped without WatchKit 1.0 apps since the native SDK was so imminent.

And Phil gave real answers to each one. Apple iterates, argues, and evaluates trade-offs. Sometimes they don’t get it right. Sometimes they’re more aggressive pushing the tech forward than power users like us think they should be. Sometimes there are trade-offs in product design that we don’t consider, or that we prioritize differently than they do. 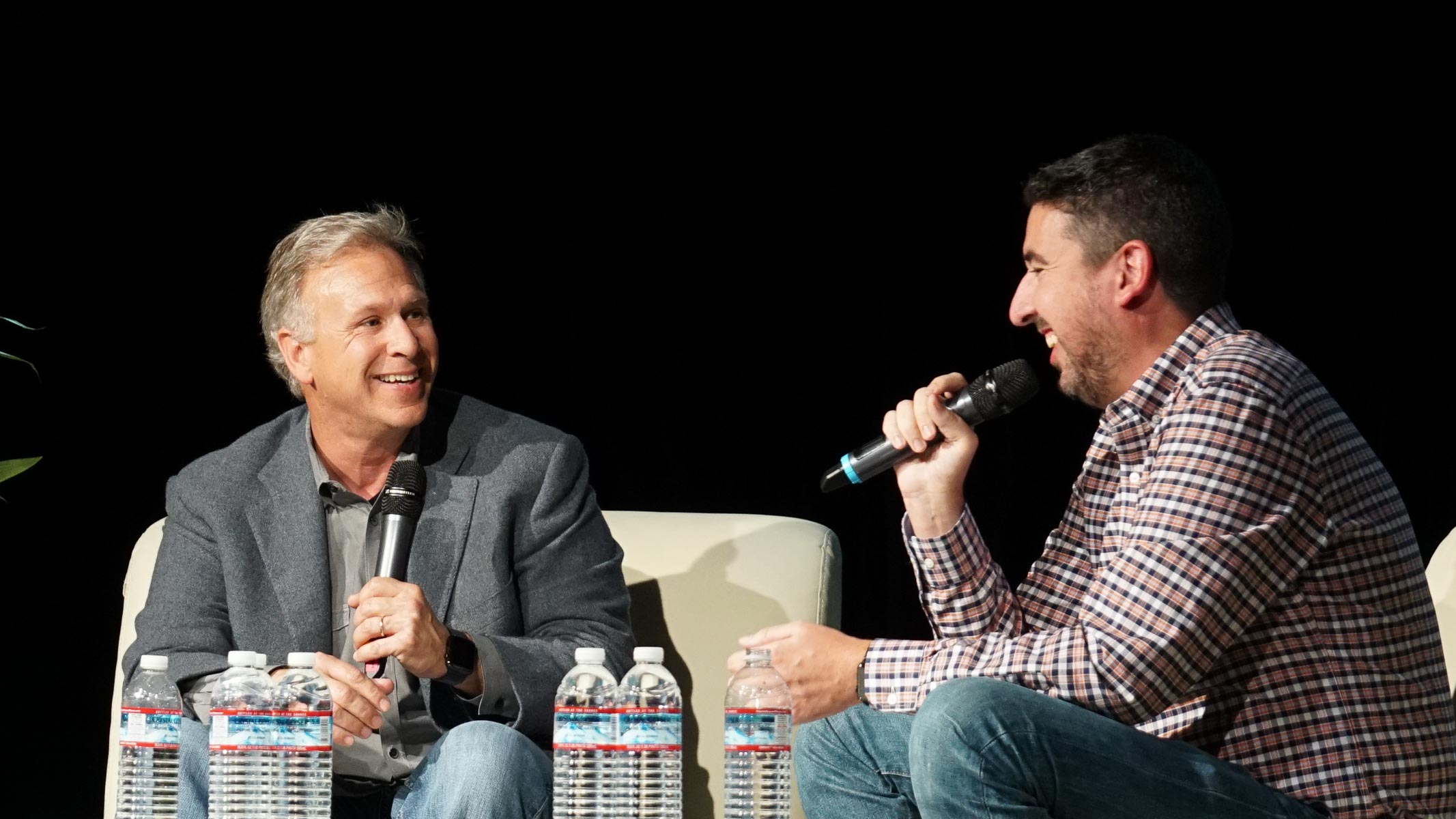 Phil made quick, smart, informed references to Apple-related podcasts and sites, including mine, that made it clear that he personally reads and listens to our community.

I’ve heard that this was the case for Phil and many other Apple higher-ups for a long time, but I’m not sure it has ever been made so clear publicly. 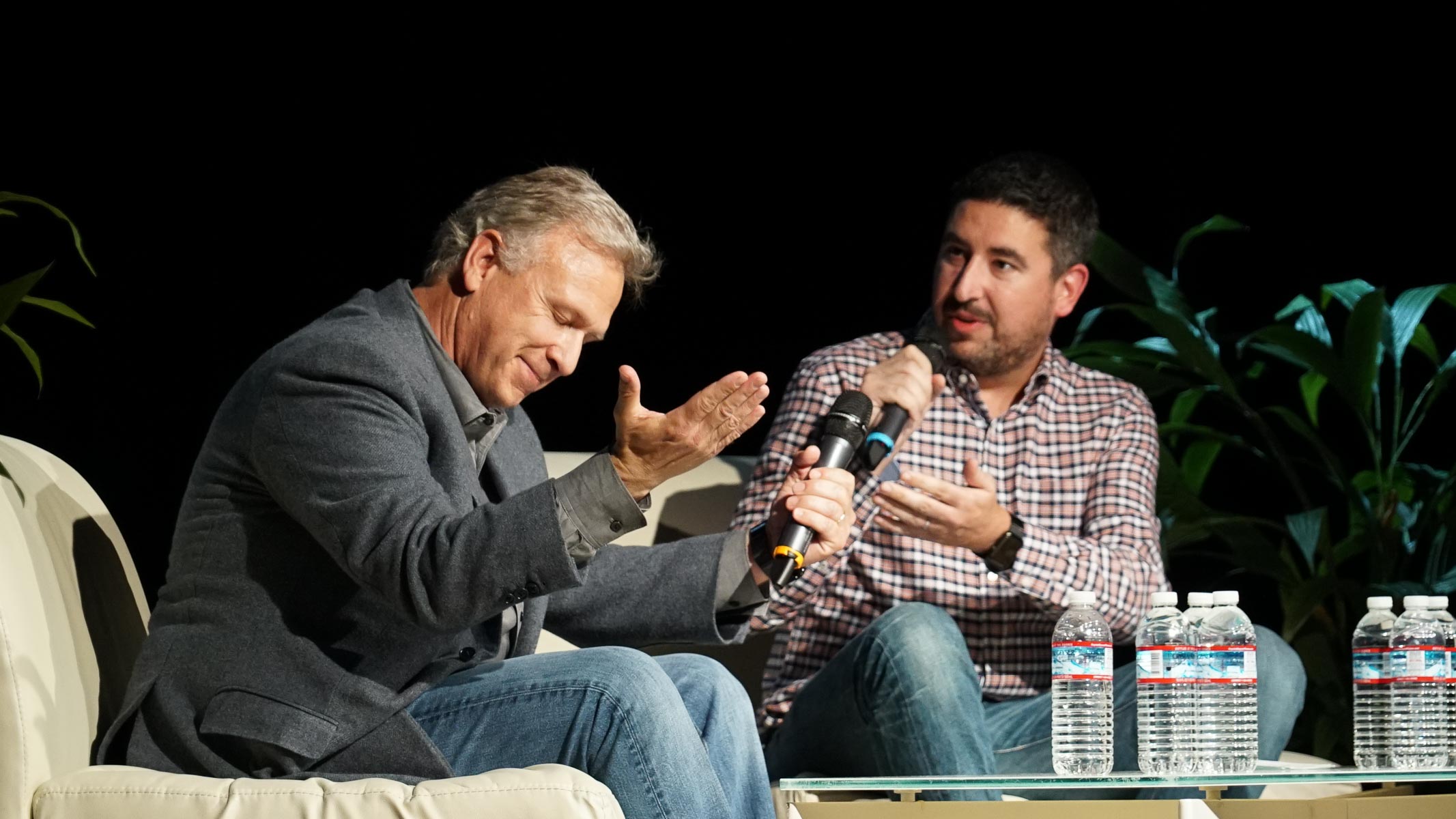 Between the serious and technical discussions, Phil and John lightly joked about typography and sports teams with each other and the audience.

They had the great rapport of professional acquaintances who’ve known each other for a while and clearly respect each other.

I’d listen to their podcast. 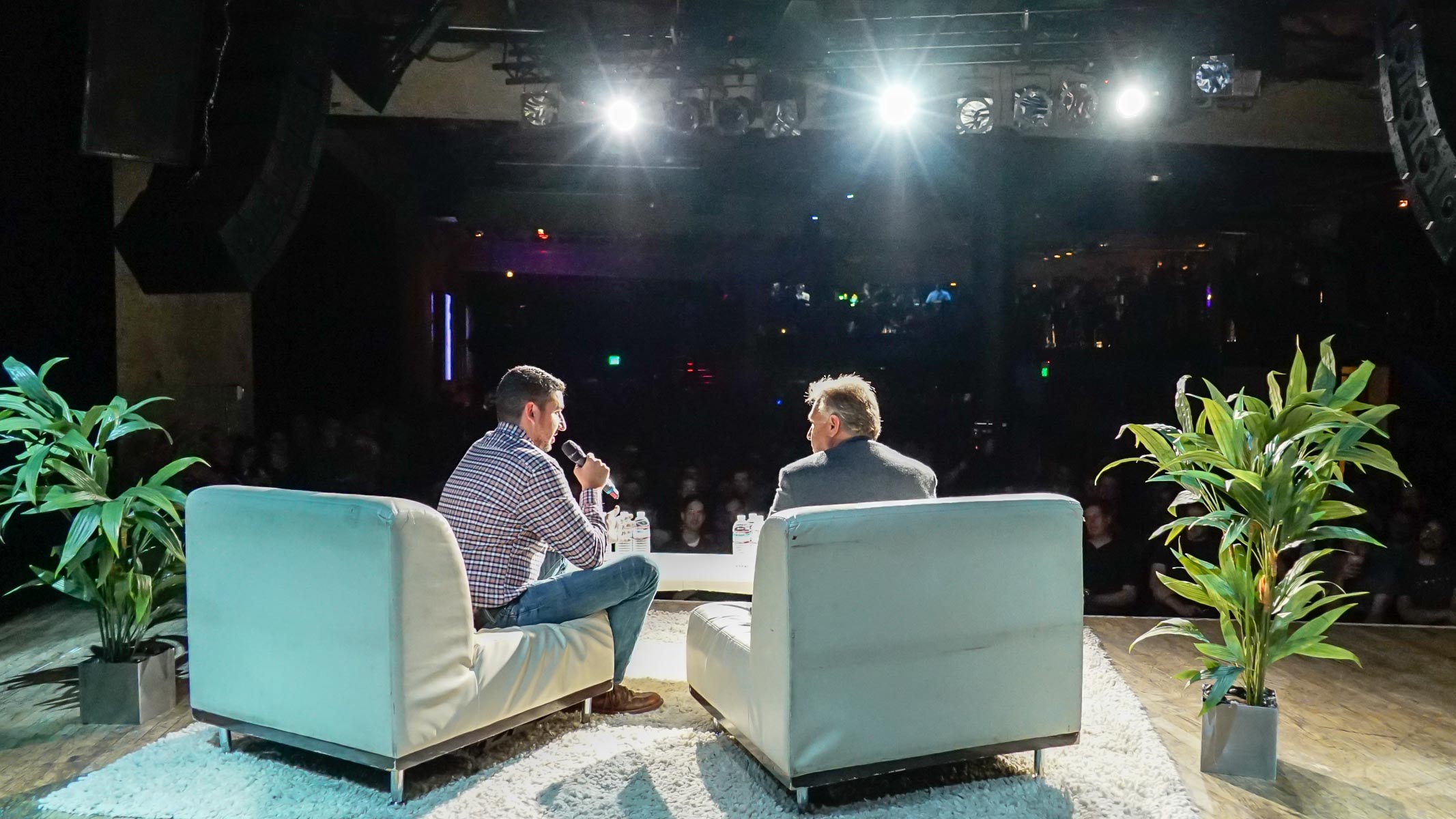 Apple is just people. Their usual communication style makes that hard to see and easy to forget.

Phil’s appearance on the show was warm, genuine, informative, and entertaining.

And humanizing the company and its decisions, especially to developers — remember, developer relations is all under Phil — might be worth the PR risk. 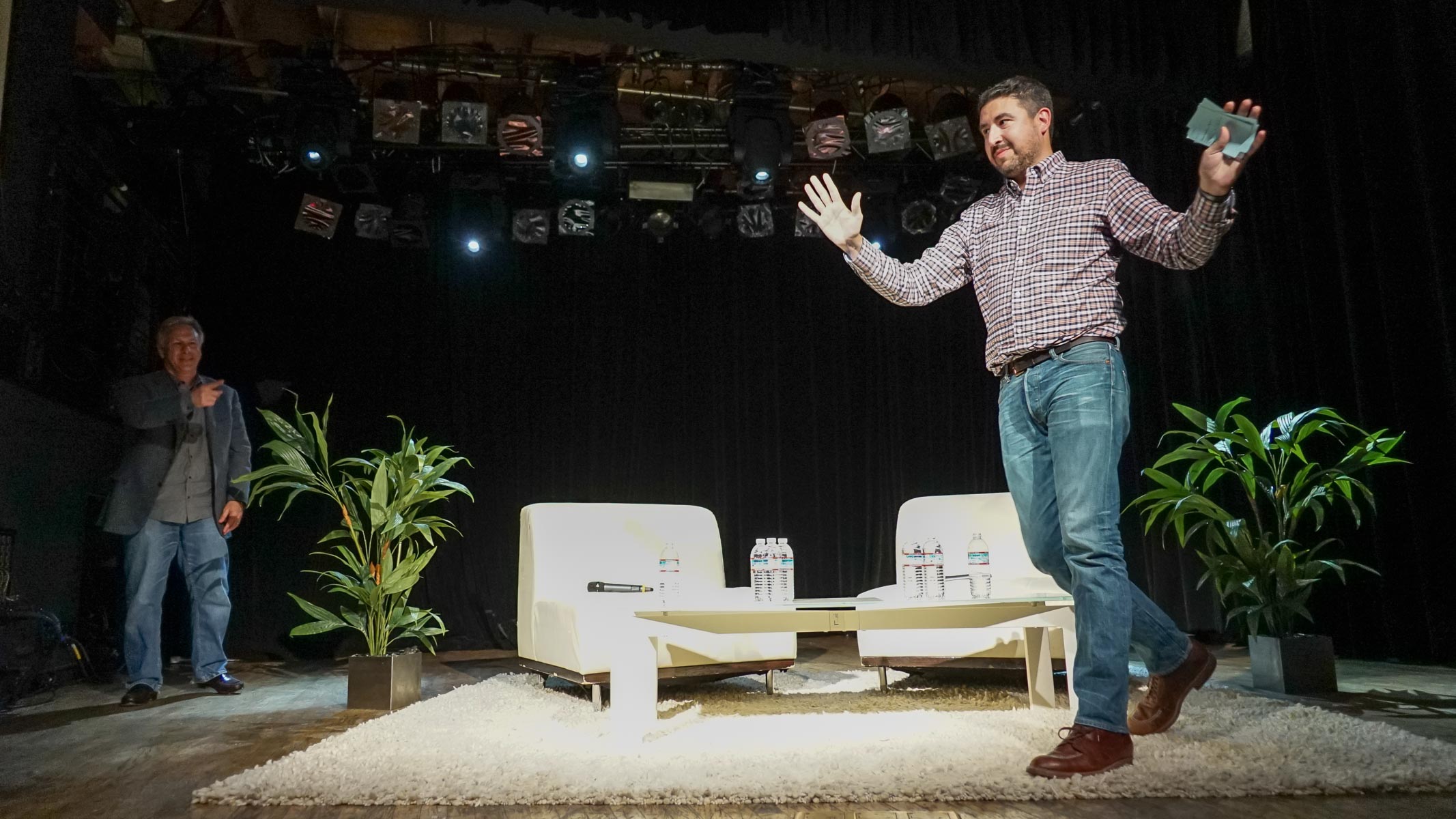 John has always seemed to want The Talk Show’s annual live show at WWDC to resemble his fond childhood memories of the Johnny Carson late-night TV talk show. Past years have been closer to that format and pacing, but this was nothing like it at all.

John isn’t Johnny — John is better. And I’d much rather watch this show than anything on TV. Talk shows on TV must be liked by everyone; podcasts sell out live venues by being loved by a niche.

This meant a lot for both John and podcasting. Apple sent an executive to be interviewed on a podcast, and one of the highlights of John Gruber’s career as a writer didn’t involve writing at all.

I’m just hoping he can get Moltz for next year’s show, because I sure as hell wouldn’t want to follow this.

Special thanks to the App Documentary guys for lending me the camera to shoot these photos at the event.

Bitcode follow-up, ad-blocking in iOS 9 and El Capitan, and how not to insulate your house.